This article explains the technical meaning of the term simulation ; for other meanings see simulation (disambiguation) . 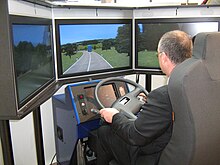 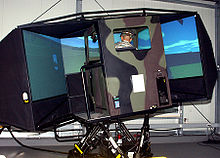 That is why the first step in a simulation is always finding a model. If a new model is developed, one speaks of modeling. If an existing model is suitable for making statements about the problem to be solved, only the parameters of the model have to be set. The model or the simulation results can then be used to draw conclusions about the problem and its solution. This can be followed by statistical evaluations - provided stochastic processes have been simulated .

The simulation method is used for many practical problems. Well-known fields for the use of simulations are flow, traffic, weather and climate simulation.

Physical experiments are also known as simulations: a car crash test, for example, is a simulation for a real traffic situation in which a car is involved in a traffic accident . The previous history of the accident, the traffic situation and the exact nature of the other party involved in the accident are greatly simplified. Also, no people are involved in the simulated accident; instead, crash test dummies are used, which have certain mechanical properties in common with real people . A simulation model only has very specific aspects in common with a real accident. Which aspects these are depends largely on the question that is to be answered with the simulation.

Tests in flow wind tunnels also fall into this category. Here, for example, statements about aerodynamic drag and lift of aircraft can be made on a scaled-down model. The same applies to fire simulations: Dangerous situations such as fires in closed rooms or vehicles are simulated and trained with real personnel for training purposes in rescue or extinguishing or new materials are tested for their fire protection properties.

There can be several reasons for using simulations:

Different simulation types can be distinguished from the application point of view:

There are also limits to any form of simulation that must always be observed. The first limit follows from the limited nature of the means, that is, the finiteness of energy (for example also computing capacity), time and not least money. A simulation must therefore also make sense from an economic point of view. Because of these limitations, a model must be as simple as possible. This in turn means that the models used often represent a gross simplification of reality . These simplifications naturally also affect the accuracy of the simulation results.

The second limit follows from this: A model only delivers results in a certain context that can be transferred to reality. In other parameter areas the results can simply be wrong. Therefore, the validation of the models for the respective application is an important part of the simulation technology. Other possible limits are inaccuracies in the output data (e.g. measurement errors) and subjective obstacles (e.g. insufficient flow of information about production errors).