The Braille [ bʁaj- ] is of blind heavily used and visually impaired, then, is a Braille . It was developed in 1825 by the French Louis Braille . The writing consists of dot patterns, which are usually pressed into the paper from behind and can be felt as bumps with the fingertips.

Numbering of the Braille dots

Six points, three in height by two points in width, form the grid for the combinations of points with which the characters (letters, numbers, spaces, ...) are displayed. With six (binary) points there are 2 6 = 64 variations ; so 64 different characters can be displayed.

Braille displays are used for the output of texts in Braille by the computer . Since more characters are required for working on the computer than can be represented with six dots, two more dots per Braille character are added to the Braille display, so that eight dots, four in height by two in width, are available ( computer braille , special implementation: Eurobraille ). In this way you get 2 8 = 256 variations. The coding of the standard characters remains the same, however, the bottom line only remains empty.

The narrow limits of the resulting character sets (64 or 256 characters) are expanded using two methods:

Steno machine - a very compact model (after folding in the space bar, the front cover can be folded up) for labeling special paper strips instead of sheets. The paper strip is visible on the left edge of the picture.
→ Main article : Braille machine

When using braille machines, the keys of the dots must be pressed simultaneously in order to write the corresponding character in the code table. The buttons for points one to three are located on the left-hand side in descending order, and the buttons for points four to six in ascending order on the right-hand side. In between is the space bar. For example, if you want to write a R(

), you have to press buttons [3], [2] and [1] with your left hand and button [5] with your right hand at the same time. A distinction is made between sheet-fed machines and steno machines. Both machine types have now largely been replaced by models that save the data on digital media - but precisely because of their reliability (no electricity, etc.), steno machines are still popular.

In addition to machines, writing boards are also in use. They are two panels that are connected by a hinge. The top board has rectangular recesses. which correspond to the size of six points in Braille. The lower board has dimple-shaped depressions at the distance of the six Braille dots.

Writing board for Braille with stylus

A suitable sheet of paper is inserted between the two panels and the required points are "pierced" into the paper with a metal pen.

Please note that in order to obtain legible characters, the reverse side of the paper is "engraved" in mirror writing and from right to left.

There are writing boards made of metal or plastic in different sizes (from about DIN A6 to DIN A4). They are used by non-sighted people for taking notes, but can also be used for additional "writing" on paper with "black print" (postcards, business cards, etc.).

Embossing devices are available on the market that emboss Braille characters into self-adhesive tapes. The embossing is mostly done from the back, so that you can work from left to right in the correct direction. The tapes produced in this way are well suited to mark a wide variety of objects in daily use. They are also used in public spaces, e.g. B. to mark handrails of banisters.

Code table for the German language

System of the structure of points

) is not used in Braille's native French , and was therefore only added later, based on the basic form of j(

). It therefore only appears in the fourth line of this overview.

In other black-written digraphs and other special characters, only point no. 6 is added to the bottom right and the bottom left (point 3) is not set.

The symbol for opening parenthesis also (stands for the closing parenthesis )and the equal sign =. Depending on the position of the character before or after letters or spaces, the intended meaning can be recognized. The symbol also ststands for the closing square bracket ]. In addition, the signs for plus +and the exclamation mark are !identical.

Special features of use and control characters

This $denotes the next character as a capital letter and stands z. B. before proper names.

This >is used when all subsequent characters should be treated as uppercase.

The '(apostrophe as a cancellation character) is used when the following characters should be lowercase again.

Ordinal numbers can be marked by writing the digits one row lower. This is possible because digits only need the top two rows of dots to represent them. The final point on the classic identification of ordinal numbers is then omitted.

Fractions are shown with numerator and denominator one after the other, but the denominator is shifted down by a row of points. Percent and per mille are shown as fractions 0/0 or 0/00, with the denominator 0 or 00 subscripted again. In addition to the comma, the point can also be used as a decimal separator.

In mathematical formulas, the arithmetic symbols can be indicated by an accent mark ( point no. 4

). In the simplified notation, the accent mark can be omitted if there is no risk of confusion with other characters.

) is also known as the point of resolution and is used e.g. B. to convert ssin ß.

Shortening of the font for the purpose of acceleration

Efforts to make the writing faster led to a shortening of the word images. In German Braille, there are basically four different degrees of abbreviation for literary braille .

The Braille shorthand is most often used for the creation of printed products in Braille (80 to 85%) and for transcripts by blind people with the braille machine .

A character in Braille is about 6 mm long and 4 mm wide, so that the sharpness of touch of trained people is not undershot. The point height (elevation) should not be less than 0.4 mm, so that the characters remain tactile . 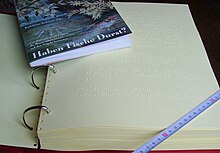 Braille for other scripts

In addition to additional assignments for characters with diacritics, there are also transfers of Braille to other writing systems than Latin . For the alphabets of the Russian or Greek language , the characters are transferred into the Latin writing system according to their transliteration , i.e. regardless of their order in the alphabet.

For differently structured fonts, such as B. Japanese , Korean or Tibetan , however, the characters have been completely reassigned. In Japanese Braille , for example, each syllable of the kana is assigned its own character.

In Unicode, the Braille character set has been expanded to 256 by adding two more dots below the block of six dots (with Braille lines , 8 dots are also usually shown). The characters with 8 points (U + 2840 to U + 28FF) are shown in the table in different colors.

Handrail lettering on a staircase in Hamburg Central Station . The lines are read from bottom right to top left in the image. The second and third lines are: KIR (CH) ENALLEE LINKS and CITY: MÖNCKEBERG (ST) RAẞE RE (CH) TS.

The content offered in Braille encompasses a wide range of different works. It ranges from classic and modern literature to specialist books and a wide variety of pornography . There are also magazines on a wide variety of topics. So published z. For example , between 1970 and 1985, Playboy also had its magazine in Braille.

In Germany there is an obligation to mark medicine packaging in Braille .

Documents prepared in Braille are sent free of charge by Deutsche Post as items for the blind .