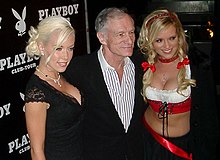 The first issue appeared in the United States in December 1953 and contained a centerfold sheet on which Marilyn Monroe posed quite freely , along with a Sherlock Holmes story, an article about the Dorsey brothers ( Jimmy and Tommy ), and another Report on the table design in the modern office. Of the initial 70,000 copies, 54,175 were sold at a price of $ 0.50 .

Originally the magazine was supposed to be called Stag Party (for example: "Bachelor Party"), which was not possible due to trademark law reasons. A friend of the publisher's Hugh Hefner then suggested the name Playboy .

During its heyday in 1975, the magazine for "Everything Men Enjoy" had a regular circulation of 5.6 million in the United States . The November 1972 issue even had a one-off circulation of 7 million issues. In the early 1970s, the magazine began with foreign language editions in European countries; the first appeared in Germany, Italy and France. Further international editions followed. Playboy is published in a total of 32 countries (as of July 1, 2012). In addition to the USA, these include Brazil, Bulgaria, Croatia, France, Germany, Greece, Hungary, Mexico, the Netherlands, Poland, Romania, Russia, Serbia, Slovakia, Slovenia and Spain. For 2012, the world edition was given as a total of 4.5 million copies. In early 2015, 800,000 copies were sold in the United States.

Since April 3, 2008 the magazine has also been published in the Philippines . In some countries in Asia there were significant protests because of the revealing pictures. Playboy was not allowed to be sold in China and Malaysia . In the Filipino version, no completely naked women were depicted - an emphasis was placed on high text quality.

In addition, there were and still are special editions that appear primarily in the USA (e.g. Voluptuous Vixens , College Girls , Book of Lingerie ). Today Playboy is also widespread on the Internet; articles and other multimedia content are published there. There is a membership account , the so-called Cyberclub .Y

In 2015 the publisher decided not to show complete nudity online anymore. This change is in response to the guidelines of companies like Facebook and Apple that are important as marketing or sales channels and that have conservative attitudes towards sexuality and nudity. The publisher stated that this had quadrupled its reach to 16 million 'Unique Monthly Users'; the average age has fallen from 47 to 30 years, making users a significantly more valuable target group for advertisers. In October 2015 it became known that from March 2016, completely naked women will no longer be shown in the magazine. According to the publisher, nudity is freely available everywhere on the Internet and no longer an incentive to buy the Playboy. They want to continue to have beautiful women portrayed as playmates by prominent photographers; In future, however, they will be suitable for minors and will be retouched less expensively. The decision was seen as an error after about a year and was reversed; Since the March / April 2017 issue, Playboy has again included nude photos.

From January 2017, Playboy appeared bimonthly in the US and quarterly from January 2019. In March 2020, it was announced that the magazine would be retired in the United States after the spring issue. The COVID-19 epidemic has accelerated this decision.

The Playboy-Bunny logo , the stylized rabbit's head with a bow tie, was created in 1953 by the designer Art Paul for the second edition and has since appeared on the cover of every US edition. It became known worldwide and varied several times over the years:

The first German edition of Playboy appeared under the direction of editor-in-chief Raimund le Viseur on August 1, 1972. At this point in time, the so-called “ sex wave ” had reached Germany.

The German edition of Playboy was published by the Bauer publishing group until December 2002, and from January 2003 it was published by Playboy Deutschland Publishing GmbH, a subsidiary of Hubert Burda Media . On December 1, 2019, Florian Boitin and Myriam Karsch took over the magazine as part of a management buyout with their Kouneli Media GmbH.

The German edition has lost a lot of circulation in recent years . The number of copies sold has fallen by 65.7 percent since 1998. It is currently 94,478 copies. This corresponds to a decrease of 181,277 units. The share of subscriptions in the circulation sold is 41.1 percent.

The first Austrian Playboy edition was published on March 15, 2012 and went on sale with a circulation of 60,000. Before sales of this first Austrian version began, around 15,000 copies of the German edition were sold monthly in Austria.

The Austrian edition is expressly not a regional version of the German playboy. There is a separate Austrian team of authors who focus on Austrian topics.

The first playmate was Anna Repnik from Graz, who was twenty at the time.

There are currently 35 international editions of Playboy magazine. Eight editions have now been discontinued (Georgia, Hong Kong, Indonesia, Japan, Norway, Sweden, Taiwan, Turkey). The youngest member of the Playboy community is Israel. After the Australian Playboy edition was discontinued in January 2000, the South African licensee is now producing its own Australian edition again. In South Africa, Playboy magazine appears both in English as Playboy South Africa and in Afrikaans as Playboy Suid Afrika , although both editions are independent in terms of content despite the same publisher. A Playboy magazine is distributed in Singapore under the name VIP . It has all the features of normal Playboy magazines, e.g. B. there is a Playmate of the month.

From 1970 to 1985 the publisher also published its magazine in Braille .

With the online shop PlayboyVapor.com, Playboy launched a new sales concept in January 2014 to sell Playboy products to end customers. On PlayboyVapor.com, the Playboy offers tobacco and nicotine products, including water pipes and electronic cigarettes. Free condoms are included with every order as a giveaway . Sales of Playboy's first official web store, PlayboyStore.com, have been on a decline for years.