Lifestyle is a redirect to this article. See also: Lebensart (magazine) , magazine. 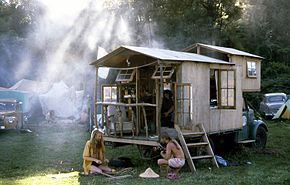 Lifestyle appears here as a term for specifically recognizable combinations of leisure preferences (e.g. what music one listens to), but also professionally or family-related for a style that reduces the social distance between the respective carers of this style (or trust in the Reactions of others increased) or increased towards others (the so-called "invisible barriers" erected). This relates to characteristics such as living style, clothing, speech gesture or whereabouts. An example of a pronounced lifestyle was e.g. B. the dandy . Today next to the black scene z. B. LOHAS ( Lifestyle of Health and Sustainability ) listed as a new lifestyle type.

The lifestyle is associated with attributes that set a person apart from others or connect them to others. A lifestyle can be part of a cultural movement, even an expression of political protest. But it can also embody enjoyment and joie de vivre and be apolitical at the same time.

Typical lifestyles can be assigned to subcultures , such as those of the hippies , punks , rockers or mods . A lifestyle less called subculture is that of the dandies and playboys . “ Simple life ” is also an example of a lifestyle.

Lifestyle is particularly addressed or even created by advertising. Lifestyle is a very important economic factor, namely in that it ensures consumption and thus growth. Lifestyle changes with fashion, for example (in the clothing sector as in many others) and therefore brings sustainable movement into the economy .

The term lifestyle , borrowed from Anglo-American, is used to describe lifestyles in the youth culture spectrum, as well as lifestyles that are strongly geared towards hedonism , luxury and consumption or that are associated with associations of “stylish”. The term lifestyle describes in a very comprehensive way the “stylish” appearance of a person and includes his behavior and leisure habits. It is a term that goes far beyond the styling of clothes and body ( body styling , make-up , tattoos , tanning, etc.). The term “lifestyle” differs in its shading of meaning from the term “lifestyle” in roughly the same way as “style” differs from “style”.

A general definition for the sociological use of the word lifestyle is provided by Stefan Hradil :

"A lifestyle is [...] the regularly recurring overall context of a person's behavior, interactions, opinions, knowledge and judgmental attitudes".

As an example of this group of theories, Pierre Bourdieu's theory of social inequality can be cited. There lifestyle is conditioned by a certain social situation ( social class ). This class situation creates a certain behavioral disposition ( habitus ) in humans , which is expressed in certain cultural practices . Building on such models, the advertising industry developed schemes to describe lifestyles, for example the AIO model .

Newer representatives of cultural studies can be named as an example of an orientation that is more oriented towards an individual choice of lifestyle . When for the modern person the whole of life becomes an individually responsible "experience project", the social situation and the freely selectable lifestyle seem to become decoupled. The prerequisite for this, however, is that the material resources of marginalized groups are still just sufficient to participate in the adventure market and to participate in the lifestyle group. Subjectively, this participation becomes all the more important, the more people are excluded from participating in the “work” experience. Examples of this are punk culture , the Gothic scene , rappers and many facets of pop culture .

Lifestyles in an intercultural comparison

The comparison of lifestyles in West and East Germany, the Czech Republic and Poland indicates the existence of four basic lifestyles that exist in these cultures. Lifestyles can be described as value patterns that symbolically represent a social group. These value patterns are interrelated, they are mutually dependent and represent in their entirety the culture (the range of values) of society. Both the studies by Annette Spellerberg for West and East Germany and Jan Komunikant for Poland confirm the existence of four basic types:

Type A represents a culturally interested, socially oriented, individualistic and rather traditional lifestyle that symbolizes high prosperity. The style of clothing is elegant and well-groomed, often expensive. In the free time, high cultural interests (theater, opera, classical music, literature) are in the foreground. Representatives of this type are sociable, spend their free time away from home, and are socially oriented. The majority of them are educated and mostly practice an academic profession. Quality of life and individual enjoyment are important values ​​as well as a lasting relationship and partnership.

Type B represents a traditional, domestic, and family lifestyle. Its representatives often live modestly and withdrawn in a village, a small town or in the country. This guy is comparatively passive and disinterested. If at all, simple sporting leisure activities are practiced, cultural activities hardly play a role. The focus is on life at home and in the family. Safety and security are central values. The style of clothing is inconspicuous and neat. The educational and professional level is relatively low. The modest to average prosperity of the (lower) middle class is symbolized.

Type C represents a success, experience and pleasure-oriented lifestyle. In addition to numerous leisure activities in both sport and culture, socializing, work and success at work are central to life. The clothing style is sporty, modern and sexy. Intensive experience and individual enjoyment are central values. People live at high speed, it's about fun, excitement, success and relaxation. This lifestyle is very individualistic, it represents the young generation. Its representatives are mostly (still) not tied to families, have an above-average education, occupy or strive for well-paid jobs. Money plays an important role for many.

Type D represents a leisure and adventure-oriented lifestyle that is simple and relatively traditional. For this type, family, life at home with a partner and children is of central importance. Security and security in the family are central values. The lifestyle is modest and relaxed, concentrating on one's own environment. The external appearance is modern, sporty, casual, the spectrum ranges from inconspicuous to attractive and sexy. This type pursues simple cultural leisure activities, is sporty and close to nature. In addition to being cozy at home, social activities outside the home are also important. Representatives of this type are well educated, have a secure job, and have an average income.

If one assumes that lifestyles are subcultural variants of the way of life of a culture as a whole, then the intercultural correspondence of the number and basic orientation of these four lifestyles means that the four cultures examined apparently have the same basic structure, which is a structural constant of the underlying cultural system acts. That does not mean that there are only these four styles of life, rather that they can also be further differentiated. Only the four lifestyles present in all four cultures seem to be symbolic basic forms that are formed according to the conditions of the next sub-system - the social system - that is, they represent the symbolic representation of at least four social groups or subcultures, into which a modern European society is necessarily structured.

Individual cultural peculiarities in the characteristics of the four basic lifestyles can accordingly be understood as adaptations to the conditions under which the given society or its subcultures exist. The basic form of a lifestyle is evidently modified according to these conditions and continuously adapted.

The social (and biological) causes which, according to Bourdieu, are decisive for the number, structure and arrangement of lifestyles are a) the age of the representatives of a lifestyle, b) education and occupation, the available economic capital or material Determine the basis of a lifestyle, c) the origin of the representatives of a lifestyle, which determines their social capital in the form of social class and social networks, and d) the degree of (general) education, which determines the available cultural capital. These basic conditions result in certain possible combinations that make a certain number and characteristics of lifestyles probable on the symbolic level of culture. Table 1 shows the social causes of the four basic lifestyles:

Accordingly, the formation of these four basic lifestyles is only possible and likely in those societies that have similar conditions in the next subsystem - the social. This means in societies in which there is a similar differentiation and distribution of economic (high - medium - low standard of living), social (upper, middle and lower class) and cultural (high - medium - low education) capital at the social level of society and subsequently a similar breakdown into subcultural groups. These are above all modern industrial and information societies with a western character. It can also be assumed that a society that is structured according to partly different social criteria, e.g. according to gender roles (Arab cultures), or in which there are only a few subcultural groups that have a group-specific capital that distinguishes them from others (Chinese culture) , will train correspondingly fewer or different lifestyles and thus also have a (completely) different overall cultural worldview.

The individual psychology , Alfred Adler's approach of depth psychology , the typical calls finality of an individual's lifestyle. In Adler's view, it is expressed in the entire behavior of people, as the steady, goal-oriented movement of the respective person in the most varied of life situations. Adler understands this lifestyle as an expression of the individual confrontation of people with their innate talents and the environmental demands of their lives from early childhood.

In medicine, factors such as diet, sleep behavior, possibly the use of soft drugs, stress, exercise and sexuality are summarized and examined under the term lifestyle. As part of a therapy or for prevention, the doctor may recommend a change in lifestyle. This is particularly the case with the so-called lifestyle diseases. Measures to influence the health-related lifestyle of the population are also taken within the framework of health policy (example: national action plan for healthy eating and exercise ).