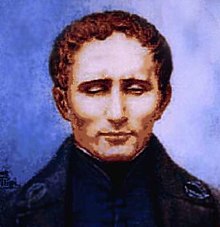 Louis Braille, detail of the miniature portrait of Lucienne Filippi, birthplace in Coupvraie

Bust of Brailles on the lake promenade in Bad Wiessee 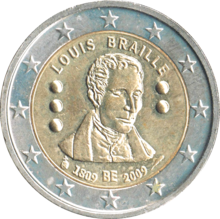 Louis Braille [ bʁaj ] (born January 4, 1809 in Coupvray , Île-de-France , † January 6, 1852 in Paris ) was a French teacher for the blind and inventor of the braille system named after him for the blind , Braille or Braille for short.

Invention in childhood and adolescence

At the age of three, Braille injured his eye with an awl from his father's saddlery . The injured eye became infected and the second, previously intact eye also became ill. This sympathetic ophthalmia led to the total blindness of the five-year-old Louis. Since the inquisitive boy did not want to resign himself to being able to experience literature only by reading aloud, he thought about a writing for the blind.

Louis Braille invented his Braille not alone. He also built on the considerations of others. In Valentin Haüy's school for the blind , which he attended from 1819, he got to know a system that Haüy had got to know at a concert followed by a conversation with the blind composer, pianist and music teacher Maria Theresia Paradis during her three-year European tour with a stay in Paris. A type case had been developed for her with which she could set her correspondence and grades, teach blind and sighted children together and thus also provide for a living. Haüy was so fascinated by it that he also developed these devices for himself, with which movable letters and notes could be embossed in paper, making them palpable.

Louis Braille was made aware of this system as a pupil of Haüy's and he experimented in his father's shoemaker's workshop with making triangles, squares and circles out of pieces of leather, which were supposed to make writing even easier. But the result did not satisfy him. At the age of 11, Braille got to know the "night script" invented for military purposes by an artillery captain named Charles Barbier , which was a complicated system of dots and syllables. Braille simplified this script by replacing the syllables with letters and reducing the number of dots from twelve to six per character. With this binary 6- bit coding, 64 different characters could be represented (2 6 = 64), which - also because the difference between uppercase and lowercase letters - are not used at all. Although this set of characters would have been large enough, Braille introduced a special character for “switching to digits” (e.g. the top 4 dots count as “g” and after switching as “7”). In 1825, the only 16-year-old Louis Braille had completed his Braille.

Although the characters were easy to learn and easy to write, they did not catch on for a long time. At the age of 27, Louis Braille transmitted a selection from the works of the blind English poet John Milton and tried to prove with a public lecture that he could write and read quickly. But his audience believed he had memorized the lyrics.

Louis Braille wrote to the French Minister of the Interior and received the bland reply: "This work seems to me to be excellent, and Mr Braille deserves to be encouraged." However, there was no official recognition. In addition to that, the new director of the school for the blind, the Braille banned. He believed that the blind would isolate themselves through scripture unknown to sighted people. In addition, the director had invented a handheld device with which the alphabet could be written. However, some students secretly continued to practice braille.

Development of a musical notation for the blind

1828 Louis Braille invented a based also on the six points of notation , first for the piano. He transferred entire organ scores into his new music script for the blind. It quickly caught on and is still the perfect way for blind people to read and write sheet music. In the meantime, this font has also been standardized internationally.

Braille also completed training as an organist , which he completed in 1833. He performed this activity on the organ of the Paris church of Saint Nicolas des Champs .

In 1839 Louis Braille published his raphigraphy to recreate the Latin letters with dots, on which he had worked for a long time. This script was intended for blind students who wanted to write to relatives or friends who could not read this braille. The upper and lower case letters and digits of the raphigraphy alphabet were up to ten points high and of different widths. With the onset of development of the mechanical typewriter , this font fell into oblivion again.

Braille's death and the international recognition of Braille

100 years after his death, Braille's body was exhumed and transferred to the Panthéon in Paris . His hands, which were so central to the invention, remained in Braille's grave at home.

On the occasion of the 200th birthday of Louis Braille, Belgium issued a 2 euro commemorative coin on September 25, 2009. Italy also issued a 2 euro commemorative coin on October 15, 2009 for this occasion. Another coin was issued in 2009 by the Republic of Palau (Pacific Islands) valued at 5 dollars. The special thing about this coin is the lettering "Louis Braille", which is neither in Braille nor in Latin letters, but in the 9-point script Fakoo, which was only invented in 2008 .

The DBSV holds every year with the Blista in Marburg , the Louis Braille Festival through.