This article deals primarily with the origin, representation and pronunciation of the letter K. The different meanings of this character can be found under K (disambiguation) . For technical reasons : K also forwards here; for the magazine see therefore K (magazine) .
Kk 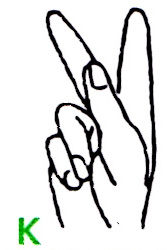 The letter K is in the finger alphabet

The finger alphabet for the deaf or hard of hearing represents the letter K by spreading the index finger , middle finger and thumb upwards and the remaining fingers on the palm.

The letter K denotes the German the voiceless velar plosive [⁠ k ⁠] . In Swedish it can also be for the voiceless fricative alveolopalatalen [⁠ ɕ ⁠] are.

In the Protosinaite script the letter represents the palm of the hand. In the Phoenician alphabet the letter was already strongly stylized. It had the name Kaph (palm) and stood for the sound value [k]. The Phoenician sign Yodh was partly written like a mirrored kapha, but must not be confused with it.

In the Greek alphabet , the kaph was adopted as kappa and also had the sound value [k]. At the beginning, the opening of the K still pointed to the left, after the Greeks switched the writing direction to left-to-right, the letter was mirrored.

The Romans adopted the K for the sound value [k] in their alphabet and later mirrored it analogously to the Greeks when the direction of writing changed. Ever since the development of the classic Latin but the letter eked out a shadowy existence - the sound [k] was especially by the letter C played. This is still the case today in the Romance languages , where K is only used in foreign words , apart from Sardinian . Over time, in the so-called Vulgar Latin , the basis of the Romance languages, the sound value of the C in front of the light vowels [e] and [i] via the intermediate level [t͡ɕ] (as in German whip ) from [k] to [t͡s] and then further developed to [s] or [θ] (as in English: thing ). This sound change, it is a question of a palatalization , took place in the first five to six centuries after Christ.
Also the result of the development of Latin [k] before a, o, u. is not represented with the letter K, but with C or Ch in the relevant languages. Examples: lat. C aput (main)> French. ch ef [ʃɛf], lat. c ulum (butt)> French. c ul [ky], span. c ulo [kulo], lat. c ollum (neck)> French. c ol [kɔl] (collar), c ou [ku] (neck), Italian c ollo , Spanish c uello ['ku̯eʎo].
Other languages ​​mainly use the K to clearly represent the sound [k].

District roads in Germany are marked with a prefixed K and a number.

The k is also used by young people as an abbreviation for the confirming okay , but mostly only while chatting in chat rooms such as WhatsApp or on Facebook . It is pronounced not as “K” but as “Kay”. An example sentence in the chat room:

In some Spanish-speaking countries, such as in the Andes region, the k is often used as a belittling variant of the equally pronounced qu or c , for example to express affection in a special way ( te kiero ). The Peruvian President Pedro Pablo Kuczynski used this principle for the name of his party: Peruanos Por el Kambio .

The Kelvin (unit symbol: K) is the SI base unit of thermodynamic temperature and at the same time the legal temperature unit.