Compared to Italian and the other Romance languages, Sardinian has retained a relatively large number of phonetic and grammatical elements from Latin . Many Catalan and Spanish influences can also be found in Sardinian.

The Romance language Sardinian is not to be confused with the pre-Roman, non- Indo-European Paleo-Sardinian.

A common written language valid for all Sardinian varieties, the Limba sarda comuna (LSC), was introduced experimentally in 2006; the first text in LSC is the Statute of the Autonomous Region of Sardinia, ratified on March 7, 2007.

Spread of the dialects of Sardinian

The main dialects of Sardinian are:

Particularly noticeable in Sardinian is the definite article : In contrast to the other Romance languages ​​with the exception of Mallorcan , this does not use the Latin demonstrative pronoun illegal, illa, illud (e.g. Italian il / lo, la, French le, la, Spanish el, la ) and the respective plural forms, but is derived from Latin ipse, ipsv (m), ipsa (m) etc.: In the singular, the Sardinian definite articles are su (masc. sing.), sa (fem. sing), in the plural sos (mask. pl.) and sas (fem. pl.) in Logudorese, in Campidanese is for both genera.

As in Spanish and Romanian , for example , the direct object is marked with a preposition (the so-called prepositional accusative ): deo bìdo a Maria (“I see Maria” (literally: I look to Maria )).

Characteristic is the extensive preservation of the vulgar Latin vowel system, v. a. in Logudorese and Nuorese (in Campidanese only in a stressed position, in an unstressed position a reduction to -a, -i, -u can be observed, similar to Sicilian )

Special features of Sardinian are also the metaphony ( umlaut ), the epithesis ("secondary vowel": if a word or sentence ends in a consonant, the previous vowel is repeated: e.g. sas domos - pronounced: / sar or sal domoso /) as well as the existence of the retroflex consonant [(] (which only occurs in the Geminate) , which is usually represented graphically with -dd- , -ḍḍ- or -ddh- .

Sound shifts from Latin to Sardinian

Because of the outcome of the War of the Spanish Succession , the former Spanish colony of Sardinia only belonged to Austria for a few years after the Peace of Utrecht and the Peace of Rastatt . However, the situation changed again when Spain sent a fleet to Cagliari (Casteddu) in 1717 to reoccupy the island. As a result, Sardinia fell under the rule of the House of Savoy , who received the island in exchange for Sicily .

Many intellectuals had written essays on the problem of the Sardinian language, such as the philologist Matteo Madau, who wanted to make Sardinian the national language of the island, and the professor and senator Giovanni Spano , who had chosen the Logudorese variant as the official and literary language, similar to the Florentine language Dialect recognized as the Italian language . However, the Piedmontese government decided in July 1760 to enforce Italian by law, as the Savoyards decided geopolitically to remove the island from Spanish influence and to adapt Sardinia culturally to Piedmont and the broader Italian culture. 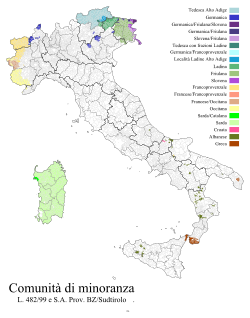 Ethno-linguistic groups recognized by Italy in 1999 as “historical linguistic minorities”.

Despite the policy of assimilation , the hymn of the Piedmontese Kingdom of Sardinia was the Hymnu Sardu (or Cunservet Deus su Re ), the text of which is in Sardinian. When the First World War broke out, the Italian army had founded the Sassari Infantry Brigade on March 1, 1915 ; In contrast to the other Italian brigades, only the island's population was recruited for these. It is also the only Italian infantry brigade that has its own anthem in a regional language: It is called Dimonios after the name "Red Devil" (the Sardinian Dimonios stands for the German "devil"), which the Austro-Hungarian soldiers denote Sardinians had given to show their worth in war.

During fascism , all non-Italian minority languages ​​were banned. In practice, Sardinian dominated, but the restrictions went so far that most of the Sardinian surnames were changed to sound more "Italian"; for example, the family names Lussu and Mannu became Lusso and Manno . During this period, singing the national anthem Cunservet Deus su Re was the only way to use a minority language without problems because the anthem was part of the tradition of the royal family and therefore could not be banned. For fear of political messages, the church had imposed a strict blockade on muttos , which are a form of improvised pastoral poetry. Salvatore Poddighe, a political poet, committed suicide as a result.

Frequency of use of regional and minority languages ​​in Italy (ISTAT, 2015).

In 1999, Sardinian was recognized by Law 482-1999 along with other minority languages ​​such as Albanian , Catalan , German , Greek , Slovenian , Croatian , French , Franco-Provencal , Friulian , Ladin and Occitan , but it is very difficult to actually recognize it in everyday life To achieve life: In many Italian libraries and universities z. B. Books about Sardinian can still be found under Linguistica italiana (Italian linguistics), Dialetti italiani (Italian dialects) or Dialettologia italiana (Italian dialectology), despite its recognition as a separate language on a scientific and legal level . The assumption is still widespread that Sardinian is just an Italian dialect (sometimes even at the institutional level despite the now valid law), as was common for all non-Italian minority languages ​​for ideological reasons, although Sardinian is already used by scientists outside of Italy was long considered a separate language. Because of this classification, Sardinian has suffered from the prejudices associated with Italian dialects, and it carries a great stigma because of it.

Although there have been various campaigns to equate Sardinian with Italian, and although there is a great emotional value associated with the Sardinian identity with regard to the Sardinian identity, the current sociolinguistic situation in Sardinia shows an ever decreasing language competence of children and young people. This development has various causes, mainly political and socio-economic (e.g. for reasons of the depopulation of the interior and the increasing rural-urban migration , the Italian policy of assimilation towards the minority languages, the immigration of people from the Italian peninsula , the heated debate about the standardization of the language . etc.). However, this process is not progressing homogeneously across the island. Many Sardinians (especially those who were born and live in cities that are far more densely populated than the villages) did not pass their language on to their children, which is why the younger generation often has little knowledge of Sardinian. The UNESCO has Sardinian "as endangered " (definitely endangered) classified because "many children learn the language, but they no longer speak, when they are of school age."

There is a sharp decline in language skills from one generation to the next. According to some reports, only 13 percent of children speak fluently and usually Sardinian; most of them live in the villages of Goceano , Barbagia and Baronìa , the only current strongholds of the Sardinian language. The rest of the island has been largely Italianized . In addition, Italian continues to dominate public life, e.g. B. Sardinian is not allowed to be used in schools , although there are bilingual school laws.Some linguists, taking into account the situation of some villages in Logudoro , where there are practically no bilingual children left, believe that Sardinian is a language that is dying out. They suspect that in a dozen years, when the older generation that makes up the majority of Sardinia's population has died, Sardinian will no longer exist.

A bill by the Monti government provided for the already almost non-existent level of protection of the language by a legally established differentiation between the languages ​​protected by international agreements (i.e. German, Slovenian, French and Ladin) and all other languages ​​that are not foreign State concern to lower it even further. This project did not materialize because Italy has not yet ratified the European Charter for Regional or Minority Languages . However, part of the island's intellectual and political scene reacted to this. In addition, some students wanted to take their final exams in Sardinian in 2013 , which raised the question of the language in Sardinian schools on a social and political level.

While the future of the Sardinian language is therefore uncertain, the younger ones are proficient in an Italian dialect that the Sardinian speakers call italiànu porcheddìnu with contempt : this is the variant of Italian that arose from Italian and Sardinian in a language contact situation on the island .

Sardinian is spoken exclusively on the Mediterranean island of Sardinia , which belongs to Italy, by around 1–1.3 million people, which corresponds to around 80% of the island's population. These are almost all bilingual Italian / Sardinian.

A regional law of 1997 and a law of the Italian Republic of 1999 recognized Sardinian as a minority language. Equality with Italian , as in the case of German in South Tyrol or French in Aosta Valley , has not yet been achieved.

There are other linguistic minorities in Sardinia: on the two islands in the southwest of Sardinia (especially Carloforte and Calasetta) a Ligurian dialect, the so-called tabarchìn, and in Alghero in the northwest (Catalan L'Alguer, Sardinian S'Alighera, Spanish Alguer ) a Catalan dialect spoken.