Leaflet of the squadrists from the time of forced Italianization, when singing and speaking in the " Slavic language " was forbidden in Vodnjan / Dignano .

As Italianisation (also Italianisation ) is generally the displacement of other languages through the Italian language and acculturation of ethnic minorities in Italy called.

In particular, the term refers to the attempt by the fascist government of the Kingdom of Italy , which ruled from 1922, to dominate the areas with non-Italian populations that were incorporated in the context of irredentism , linguistically and culturally, and to deprive them of their grown identity.

The ethnic composition in the areas formerly belonging to Austria-Hungary , which were assigned to Italy after the First World War until 1924, is clear from the following table. All figures are based on the Austro-Hungarian census of 1910, in which, on the other hand, the effects of the Germanization and Magyarization policy would have to be taken into account. The numbers for the Free State of Fiume refer to the city ​​of Fiume and its territory .

The following table is not adequately provided with supporting documents ( e.g. individual evidence ). Information without sufficient evidence could be removed soon. Please help Wikipedia by researching the information and including good evidence. 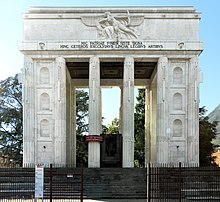 The Victory Monument ( Monumento alla Vittoria ) in Bolzano is a symbol of the assimilation policy practiced by the Italian fascists.

The spiritual father and driving force behind the Italianization of South Tyrol was the nationalist geographer and philologist Ettore Tolomei from Rovereto in Trentino . Early signs were noticeable even before the fascists came to power, for example during the Bolzano Blood Sunday or the march on Bolzano . Thereafter, the fascist government pursued the following strategies:

South Tyroleans who resisted these measures were persecuted and imprisoned or expelled. Here the school staff suffered the "most massive form of ethnic exclusion in South Tyrol". Some paid with their lives for their anti-Italian convictions, like Josef Noldin or Angela Nikoletti . However, all these measures did not lead to the desired result of assimilating the South Tyroleans.

Then an additional attempt was made to create an Italian majority in South Tyrol. In 1910 the Italian proportion of the population in South Tyrol was 2.9%, in 1961 it was 34.3%. Between 1921 and 1939 56,000 Italians immigrated to South Tyrol, so that at the end of this period the city of Bozen and the municipality of Laives south of Bozen had a predominantly Italian population and still have them today. A state-subsidized industrial zone in Bolzano created jobs. Companies that settled here were exempt from tax for ten years.

After the end of the Second World War, South Tyrol was granted autonomy rights in the Italian state association in a difficult, lengthy process; It was not until the 1970s that South Tyrol's autonomy made greater progress, thanks also to Austria's partisanship and the internationalization of the dispute before the UN . Today all place names are bilingual, in Ladin areas they are trilingual, although only the Italian place names are official. The German names are usually mentioned first on newer signs. All official documents are also issued in two languages.

The German-speaking ethnic group has been growing continuously since the 1960s. In the last census in 2011, 69.4% of the inhabitants of South Tyrol said German as their mother tongue, 26.1% Italian and 4.5% Ladin.

Language islands of the Cimbri and Fersentaler

The historic settlement area of ​​the Cimbri extends to numerous linguistic islands in Trentino ( Lusern , Folgaria and Lavarone ), in Veneto ( Sappada , Seven and Thirteen municipalities ) and in Friuli-Venezia Giulia ( Sauris , Timau ). The Fersentaler concentrate on the valley of the same name.

When the Italian fascists came to power, the Cimbrian or Fersentalerische , Bavarian dialects , were forbidden not only in the public, but even in the private and family sphere, with severe threats of punishment. In some cases it was possible to decimate the language islands of the Cimbri or even to wipe them out for good (especially Cansiglio in Veneto , Folgaria and Lavarone in Trentino ). The lawyer (international law) Eduard Reut-Nicolussi , who grew up in Luserna , represented South Tyrol in the Vienna National Assembly until 1919 and then in the Italian parliament until he was forced to flee by the fascist regime in 1927. With the option enforced by the dictators Hitler and Mussolini in 1939 in the Cimbrian and Heel Valley communities, as in South Tyrol, further linguistic islands were wiped out, others were severely oppressed and decimated. With the German occupation of Italy in 1943, the option became obsolete.

In contrast to the case of South Tyrol, after the Second World War hardly anyone stood up for the Zimbern and Fersentaler. The small linguistic islands have found it difficult to assert themselves over the past few decades and have often been subject to Italian pressure to assimilate.

The use of the language is still on the decline today, mainly due to the migration of young people to the economic centers, but recently it has been particularly popular in Lusern, but also in the Fersental and in the seven municipalities (Robaan, ital. Roana) and the thirteen communities dialect and tradition also supported by the regions of Trentino-South Tyrol and Veneto and the EU. In addition, many of the Cimbrian communities (especially Lusern and Sappada) have good economic prospects due to the expansion of tourism (among other things, they are now promoting their Cimbrian language and tradition), so that the emigration of young people can be stopped.

Therefore, the Cimbrian language is not yet extinct - a few thousand people still use it on a daily basis. The best preserved linguistic island is Lusern in Trentino: Over 90% of the inhabitants speak Cimbrian every day. Almost all Cimbri also speak Italian , many also speak standard German , some also speak Ladin or Furlan . 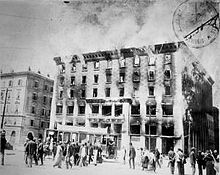 The burned out Narodni Cathedral . The Slovenian Volkshaus in Trieste was set on fire by Italian fascists in 1920.

The Croatian and Slovenian populations in Venezia Giulia were particularly exposed to a similar forced Italianization in the 1920s and 1930s . The entire peninsula of Istria including the city of Fiume ( Rijeka ) and a small part of Dalmatia (the city of Zara / Zadar , the islands of Cherso / Cres and Lussino / Lošinj in the Kvarner Bay and the islands of Cazza / Sušac , Lagosta / Lastovo , Pelagosa / Palagruža and Saseno / Sazan ) came to the Kingdom of Italy as so-called "new provinces" after the First World War . This happened within the framework of Italian irredentism . The Slovenian and Croatian languages were banned, and the Croatian and Slovenian populations were assimilated or expelled. There were repeated acts of nationalist violence: For example, on July 13, 1920, the Slovenian Narodni Cathedral in Trieste was burned down.

In the course of the “Istrian Italianization”, many Slovenes and Croats emigrated to the Yugoslav SHS state , while others got involved in the resistance organization TIGR , which was founded in 1924 and carried out numerous terrorist attacks. Conversely, Italian-speaking residents of Dalmatia were encouraged to emigrate to Italy in order to increase the Italian share of the population in Istria.

After the Second World War, Italy lost a large part of these areas again. A new spiral of violence set in: This time numerous Italians fell victim to the Foibe massacre , others, between 200,000 and 350,000, were expelled.

The Allies tried to build a multiethnic free state on part of the territory (see Free Territory of Trieste ). The experiment failed and was finally ended in 1954: the city of Trieste came to Italy, almost all of Istria to Yugoslavia (now Slovenia and Croatia ). The migratory movements in both directions, which then began again, left behind largely ethnically homogeneous areas with only small language minorities. Friuli Venezia Giulia was later given the status of an autonomous region, and the linguistic minorities are now fundamentally protected on both sides of the border. In parts of Friuli Venezia Giulia and Istria, bilingual place-name signs can be found today, occasionally even trilingual (with Furlanic inscriptions).

Under fascism, non-Italian schools in the French-speaking (more precisely, Franco-Provençal-speaking ) Aosta Valley were closed, teaching in French was prohibited, and Italian was allowed as the only court language. The francophone newspapers Duché d'Aoste, Le Pays d'Aoste, La Patrie valdôtaine were banned. In the Aosta Valley, too, all place names were Italianized (1939). Villeneuve became Villanova Baltea; Quart became Quarto Pretoria; Aymavilles was named Aimavilla; La Thuile even became Porta Littoria. However, the Aosta Valley was declared an independent province at that time and separated from the province of Turin.

Unlike in South Tyrol, the place names were restored in their original French version after the Second World War. The only place with an officially both Italian and French name is the capital Aosta / Aoste.

A survey by the Emile Chanoux Foundation regarding membership of the mother tongue (question “What is your mother tongue?”) Shows that the Italian language has largely prevailed (71.5% native speakers). Only 16.2% of the population gave the traditional vernacular, a Franco-Provencal dialect (Patois), as their mother tongue. French, on the other hand, was never used colloquially, and is not even 1% of the population's mother tongue. When asked: “What language skills do you have?”, 78.35% of Valdostans answered that they could speak French, 68.46% French-Provençal.

Since 1720 the island of Sardinia had become an overseas property of the House of Savoy , which at that time already ruled over a number of states in Italy, especially Piedmont ; because the Savoyans exercised direct rule over Sardinia, they enforced Italian as part of a broader cultural policy that would tie the island to the mainland, either to avoid possible attempts at political separation based on the native language of the islanders, or a renewed interest from To prevent Spain . However, it was only with the rise of fascism that Sardinian was actively banned and / or excluded from any cultural remnants in order to support a complete conversion to Italian, which became the island's main language at the end of World War II. Within a few generations, Sardinian, like the Catalan dialect of Alghero , has become a minority language learned by fewer and fewer Sardinian families, the majority of whom have finally chosen Italian as their everyday language. A 2012 study by the University of Cagliari and the University of Edinburgh found that those respondents who were most opposed to the use of Sardinian and who identified as predominantly Italian were also those who had the most negative views on regional autonomy.

Italianization as a linguistic phenomenon

The fascist dictatorship also endeavored to cleanse the Italian language of all foreign words, although these found common use in linguistic usage. The Italianization was mainly directed against English words. The word “bar” was forbidden and translated with “ mescita ” (about bar). Whiskey and brandy were renamed " Acquavite ". Instead of "Football", only " Calcio " was allowed, " Consociazione " became the new expression for "Club".

Prominent intellectuals also campaigned for the cleansing of the Italian language. Among them above all Gabriele D'Annunzio , who used the exclamation “ Eja, Eja, Eja, Alalà! ”Instead of“ hip, hip, hurray ”.

In addition, numerous sayings and slogans were drafted during fascism that can still be found in Italian today, albeit without political significance. This applies, for example, to the expression “ me ne frego ”, which means “I don't care”.

The attempt to use the “ Voi ” (your) instead of the “ Lei ” (you) as the pronoun of the polite address has failed. The fascists also tried unsuccessfully to establish the Roman greeting ( Saluto romano ) instead of the handshake as a greeting ritual , supposedly for hygienic reasons.