The official language is the bindingly regulated language of a country or state in language law , which applies to the government and all government agencies among themselves and towards the citizens . Administrative acts and standards are drawn up, information is given to citizens, negotiations are conducted and recorded in the official language . In it also must briefs in court and requests are submitted.

The official language is, in the narrower sense, the language in which authorities and governments communicate.

Comparable terms, which are not always synonymous with “official language”, are

Determination of an official language

The official languages ​​do not always reflect the actual mother tongues of the inhabitants of a country.

After the annexation of areas with a foreign-language population, the question of the official language arises. For example, after the Franco-Prussian War in 1870/71 , French-speaking parts of Alsace and Lorraine became part of the German Empire as the realm of Alsace-Lorraine . The language of the court became German due to the law of June 14, 1871. Since the Reichsland was largely German-speaking, but there was a strong French-speaking minority, a decree of December 17, 1874 set the court language for a number of French-speaking communities differently to French.

Sometimes countries or governments tried to assimilate an annexed area by imposing a single official language . 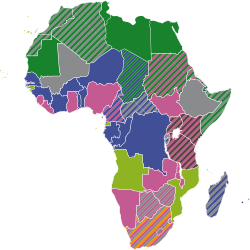 In multiethnic states it was not uncommon for conflicts to arise about the official language (s). In Cisleithanien , the western half of Austria-Hungary (1867–1918), there was a deep domestic political crisis in 1897/1898, triggered by the Baden language ordinance in Bohemia and Moravia . With this regulation, the equality of the Czech official language with the German should be ensured, which the Germans did not want to accept. Kk Prime Minister Gautsch failed in his attempt to find a pragmatic solution to the conflict by relaxing the regulation. His suggestion that every civil servant should speak the languages ​​required for duty left too many interpretations open. The language ordinances were finally repealed under the Clary-Aldringen government , and the conflict remained unsolved until 1918, when Czechoslovakia was founded.

In the case of states that do not or have not formed a single nation, the definition or change of an official language can lead to conflicts. This includes, for example, the successor states of the former European colonies in Africa, whose boundaries were often drawn arbitrarily without considering language and peoples boundaries (see ethnic minorities ). In Africa , colonial languages are usually the official language, for example French in the Democratic Republic of the Congo , in the Ivory Coast or Mali , English in Zambia , Kenya or South Africa , Portuguese in Mozambique or Angola . This language policy often favors the ruling elite, who, in contrast to the common people, speak the official language.

In the successor states of the former colonies in America , the situation is completely different. There, the Indian and Eskimo languages ​​of the indigenous people have been pushed into the background. Despite the different mother tongues of the European immigrants and the African slaves, the language of the respective colonial rulers has practically fully established itself. Spanish is the official language in large parts of South and Central America ; in Brazil the official language is Portuguese.

Individual differentiations to be made are important for Germany. This includes the distinction between the basic responsibility of the 16 individual states in Germany to determine their languages ​​and thus also, among other things, the official languages ​​on the basis of their original national cultural sovereignty and the regulatory competence of the federal government, which is limited to federal tasks (need for regulation in its own matters), which predominates in purely quantitative terms . In Germany (as in many other countries) it is also important to distinguish the term official language from terms such as legal language or court language , which are not identical.

Overall, there is a whole bundle of languages ​​in Germany that are wholly or at least regionally or factually partially official, legal, court or parliamentary languages. In addition to “German”, which is standardized at the federal level, especially according to Section 23 (1) VwVfG, as the official language in the narrow sense and according to Section 184 of the Courts Constitution Act as the court language, there are also Danish , Low German , Frisian , Sorbian , English and French . Under European law, if it applies, every official or court language of every member state of the European Union can even become a partial court language in a partial segment (applications and documents are also possible in these languages ​​before German courts). “German” is often legally interpreted (disputed in individual areas) as a generic term for High German , Low German and all dialects alike.

No state language is defined within Germany, neither at the federal level nor at the level of the 16 states. A corresponding amendment to the Basic Law has been discussed since the 2000s .

Information on the official languages ​​in individual countries can be found in the country articles (above in the info box and in the running text). If necessary, the topic is also dealt with in special articles on the languages ​​of the country, for example: