Map of the Sorbian dialects

The Sorbian language ( Sorbian for short , outdated Wendish, Lusatian Serbian , in both standard varieties serbšćina ) is the entirety of the Sorbian dialects. It belongs to the group of West Slavic languages and is spoken today mainly in Lusatia . A distinction is made between two written languages,

A number of transition dialects exist at the border between the two language areas .

Within West Slavonic, Sorbian forms a separate group and is somewhat more similar to the Lech group , especially the Polish , than the Czech-Slovak group. Upper Sorbian, however, has more similarities with Czech and Lower Sorbian with Polish. These similarities can be traced back to historical language contact; Especially between Lower Sorbian and Polish there was an area with transitional dialects until about the 17th century.

Historically, the term Wendish was used for Upper Sorbian and Lower Sorbian as well as for the neighboring Polabian languages to the northwest and Pomoran in the north. Wendish is therefore a non-differentiating term for Slavic languages ​​west of Polish and north of Czech.

While on the threshold of the 20th century there were still native Sorbian children and young people on the entire territory of today's Sorbian settlement area , this is now almost only the case in the Catholic area of ​​Upper Lusatia due to the assimilation efforts favored by Germanization efforts and economic developments.

The science for the research and documentation of the Sorbian language is called Sorabistik designated whose only university institute at the University of Leipzig is located. Outside the university, the Sorbian Institute in Bautzen and Cottbus is particularly concerned with Sorbian linguistics. 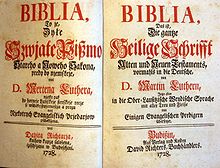 The history of the Sorbian language in what is now Germany begins with the migration of peoples around the 6th century.

Even when today's Lusatia came into the focus of medieval chroniclers , it was inhabited by two different Slavic peoples, the Milceni in the south and the Lusici in the north. Even after subjugation by states of the Holy Roman Empire , Upper and Lower Lusatia were always under different sovereignty for less than a hundred years.

Since the 12th century, with the massive influx of rural settlers from Flanders , Saxony , Thuringia and Franconia and the previous devastation of the country through wars, the gradual decline of the Sorbian language began. In addition, Sorbian was legally subordinate to German , including in the Sachsenspiegel . Language bans were added later: "Wendish" was banned as a court language in the area of the Nienburg monastery in 1293, in Altenburg , Zwickau and Leipzig in 1327 , in Meißen in 1424 (although the tradition is only traceable for 1293). Furthermore, in many guilds in the towns in the area there was a requirement to only accept German-speaking members.

The oldest written language monument of Upper Sorbian is the " Burger Eydt Wendisch ", a citizen's oath of the city of Bautzen from the year 1532. Sorbian literature only emerged in connection with the Reformation , which remained dependent on the Sorbian vernacular for its expansion. The oldest known Lower Sorbian note to date was discovered in a manuscript from 1510 that was kept in the parish library of Jauernick . It is a marginal note to a Latin-language work by Ovid . Experts from the Manuscript Center of the University of Leipzig presented the find on May 13, 2011 in the archives of the Diocese of Görlitz . The marginal note, which should therefore be considered the oldest Sorbian language evidence , reads: "Ach moyo luba lubka / bit weßola thy sy / my luba" (translated: "Oh my dear love, be happy, you are dear to me"). 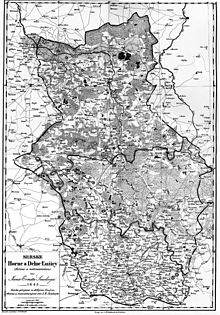 In the 13th to 16th centuries, language bans were issued in several cities and towns. The core area of ​​the Milzener and Lusitzer , two of the twenty or so Sorbian tribes that lived in what is now Lusatia , was only slightly affected by German-speaking new settlements and legal restrictions. The language therefore had a good hold there. The number of speakers there grew to over 300,000 by the 17th century.

In the Baroque era , a philological interest in the Sorbian language arose for the first time, which was reflected in the extensive grammatical and lexical works of Lower Sorbian Johannes Choinan and Upper Sorbs Jurij Hawštyn Swětlik and Xaver Jakub Ticin . Sorbian received a considerable boost at the beginning of the 18th century through the activities of the evangelical Wendish preacher colleges in Leipzig and Wittenberg . When the Wendish seminary , a convict for the next generation of Catholic priests, was established in Prague , an important connection to the Czech language and nationality was established. After the Seven Years' War the attention for the Sorbian language sank again.

Only the influence of Romanticism brought a new upswing in literary activity, and a specifically Sorbian national consciousness emerged. In the 19th century, especially in Prussia, the "Germanization policy" was very repressive, although the Sorbs received numerous privileges in 1848 for their allegiance to the king.

In the census of 1900, a total of 93,032 residents of the German Empire gave "Wendisch" as their mother tongue. The actual number of speakers is likely to have been a little higher. In 1904 the Wendish House (Serbski dom) was inaugurated on the Lauengraben in Bautzen with the participation of the official bodies as the seat of Maćica Serbska , the Smoler bookshop and other Sorbian institutions. On October 13, 1912, the Domowina Association for the preservation of the Sorbian language and culture was founded in Hoyerswerda .

Already in the Weimar Republic , but especially in the German Reich from 1933 to 1945 , the Sorbian language and culture was suppressed by court decisions, bans, Germanization and the like. During the Weimar Republic there was a specially established Wenden department to suppress the Sorbian language and culture . After the Nazi state had tried in vain to integrate the Sorbs into the new structures, the Domowina and then all other associations and Sorbian-language publications were banned and in some cases expropriated from 1937 . During the Second World War , v. a. Sorbian pastors and teachers were forcibly transferred from Lausitz as carriers and multipliers of Sorbian identity.

Domowina was re-established on May 10, 1945; as early as 1947, Sorbian newspapers appeared again. During the GDR era , the Sorbian language and culture - especially in the 1950s - received extensive state support for the first time, and the Sorbs were given the right to use their language in public. For the first time, Sorbian was given the status of a second official language, was introduced as the language of instruction in large parts of Lusatia and made visible to the public through bilingual signage. These rights were expressly anchored in the constitution of the GDR in Article 40, in the Unification Treaty for German Unity (Einheitsvertrag) of 1990 in Article 35 and explicitly in the constitutions of the federal states of Brandenburg and Saxony and the corresponding Sorbian laws. The German Courts Constitution Act (GVG) guarantees in § 184 sentence 2 the right “to speak Sorbian in court in the home districts of the Sorbian population”; The law does not determine which exact area is covered by this. Numerous Sorbian institutions were founded during this time, some of which still exist today. B. the Sorbian Institute for Teacher Education , the State Ensemble for Sorbian Folk Culture (today: Sorbian National Ensemble ), the Domowina-Verlag , the German-Sorbian People's Theater and the Institute for Sorbian Folk Research (successor: Sorbian Institute ) as well as the Institute for Sorbian Studies at the University of Leipzig (until 1968: Sorbian Institute ).

Nevertheless, the number of Sorbian speakers continued to decline, in particular due to industrialization, collectivization of agriculture and strong influx from outside. Since the mid-1960s, Sorbian lessons, which had been mandatory until then, were only optional, which led to a massive drop in the number of students. Only in a few rural areas was Sorbian able to survive as an everyday language beyond the 20th century. This is particularly true of the Catholic part of the settlement area along the Klosterwassers in Upper Lusatia, where the assimilation of Sorbian and thus the loss of language, in contrast to the larger Protestant area and Lower Lusatia, only occurred to a limited extent .

A total of around 60,000 Sorbs live in Germany today, around 40,000 of them in Saxony and 20,000 in Brandenburg . Since nationality is not officially recorded in Germany and the commitment to Sorbian nationality is free, there are only estimates of the exact number. The number of active speakers in Sorbian is likely to be lower. Unlike Upper Sorbian, Lower Sorbian is acutely threatened with extinction. According to projections, around 7,000 people actively speak Lower Sorbian, which could become extinct in 20 to 30 years, and around 13,000 people speak Upper Sorbian. According to language experts, Upper Sorbian will survive the 21st century. 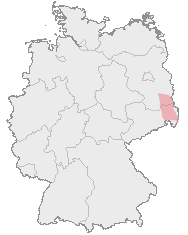 Today Sorbian is taught in 25 primary schools and several secondary schools. It is compulsory at the Lower Sorbian Gymnasium Cottbus and the Sorbian Gymnasium Bautzen . In many elementary schools and Sorbian schools, lessons are held in the Sorbian language . The daily Serbske Nowiny appears in Upper Sorbian and the Lower Sorbian weekly Nowy Casnik , as well as the religious weeklies Katolski Posoł and Pomhaj Bóh . The cultural magazine Rozhlad appears monthly, a children's magazine each in Upper and Lower Sorbian ( Płomjo and Płomje ) and the educational magazine Serbska šula . The Mitteldeutsche Rundfunk and the Rundfunk Berlin-Brandenburg broadcast monthly half-hourly TV magazines in Sorbian as well as several hours of radio programs every day, the Sorbian Radio . Wikipedia language versions exist in both written languages.

1 The form žona is literary in Lower Sorbian. The Lower Sorbian declination is adjectival because of the ending -ska.

In Lower Sorbian the vocative is only preserved in a few rigid forms.

It is noteworthy that in addition to the singular and plural , the number dual (the two number) has been preserved from Old Slavonic. Singular: ruka ("hand") Dual: ruce ("two hands") Plural: ruki ("more than two hands")

In contrast to other West Slavic languages ​​( Czech , Slovak , Polish , Kashubian ), the synthetic preterite ( aorist , imperfect ) has also been preserved in the Upper Sorbian written language and some of the dialects to this day . This form was also used in the written language of Lower Sorbian, but became increasingly rare in the course of the 20th century and is rarely used today.

In return, Lower Sorbian received the supinum (as a variant of the infinitive after verbs of movement ), e.g. B. “njok spaś” (I don't want to sleep) versus “źi spat” (go to sleep).

Not too demanding written texts of Sorbian can be understood by speakers of the West Slavic languages ​​in general.

Differences between the two written languages

There are some differences between the two written languages ​​Upper Sorbian and Lower Sorbian, especially with regard to the alphabet .

The two written languages ​​differ greatly in terms of consonants . The letter ć has been placed after č in Upper Sorbian since 2005.

Both Lower and Upper Sorbian have eight vowels .

For some words, the number of syllables is different because Upper Sorbian has shortened here, similar to Czech .

Entries for the Sorbian language in the World Loanword Database