Slovak is a redirect to this article. Further meanings are listed under Slovak (disambiguation) .

The Slovak language (Slovak slovenský jazyk ) belongs together with Czech , Polish , Kashubian and Sorbian to the West Slavic languages and thus to the Indo-European language family. Slovak is spoken by around five million Slovaks in Slovakia and around two million emigrants, around one million of them in North America ( USA , Canada ). Since May 1, 2004, when Slovakia joined the European Union , Slovak has been one of the EU's official languages.

→ Main article : Differences between the Czech and Slovak languages

Slovaks and Czechs understand each other quite easily. This was promoted by the common history in Czechoslovakia from 1918 to 1992. However, the younger Czech generation, who grew up after the separation of Slovakia and the Czech Republic, is having a much harder time. Official documents in the other national language are automatically recognized in the Czech Republic and Slovakia. The right to use the other language in official dealings is enshrined in the Slovak Minority Language Law and the Czech Administrative Code. Television programs in the other language are almost always broadcast in Slovakia and often untranslated in the Czech Republic. 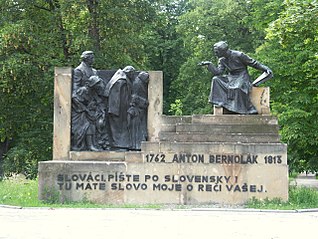 Slovak originated in the 10th century after the fall of the Great Moravian Empire from the language of the slověne (pronounced roughly [sloan] (open e) or [sloven] (middle e)), that is, the population of this empire (see under Slavs ), in the form of several dialects. From the 10th to the 19th century in the Kingdom of Hungary (of which Slovakia had become a part in the 11th century), Latin was predominantly used as the official and literary language. In addition, German and Hungarian were partly used. In addition, especially the bourgeoisie of Slovakia began in the 13th and 14th centuries to use their own language as a (parallel) official language, although soon (at the end of the 14th century) they switched to this function and later also as To use the Czech literary language . The reasons for this were initially mainly that it was a "ready-made" written language of a related country with a famous university in Prague , in the 15th century also the influence of Czech Hussites in Slovakia and later also the influence of Czech Protestant emigrants in Slovakia. Conversely, the four most important innovators of the Czech language in the 18th and 19th centuries were two Slovaks, Jan Kollár and Pavel Jozef Šafárik . The Czech texts were very often (consciously or unconsciously) provided with Slovak elements (so-called Slovakized Czech, see also Žilina ). The respective Slovak dialects were of course still used orally.

Although there were attempts to establish a common written Slovak language as early as the 16th century, the first correct uniform written language was only established in 1787 by Anton Bernolák on the basis of the West Slovak dialect from the Trnava area . Today's written Slovak language was determined by Ľudovít Štúr in the 1840s on the basis of a central Slovak dialect (see National Revival of the Slovaks ). The late codification of the language made it possible to keep essential areas of the Slovak formal system simpler than the Czech.

Slovak is a highly inflected language with six grammatical cases .

Before e and i, d / l / n / t are pronounced palatalized, i.e. articulated with an echo of a j after the consonant. The tongue goes to the front palate. There are a number of exceptions to this rule, especially in foreign words (for example, the word telefón is pronounced as it is in German), but also in a smaller group of native words such as teraz "now".

Most letters are pronounced like in German. Spoken differently (partly due to the basic rules mentioned above):

The rule known as "rhythmic shortening" is characteristic of Slovak. According to this rule, two long syllables cannot follow each other in Slovak. If two long syllables should follow one another, the second is usually shortened, for example:

There are, however, a number of exceptions, such as the possessive adjectives in -í (e.g. vtáčí / vtačí “belonging to the bird”), nouns with the suffix -ie (e.g. prútie “ sticks ”) and the like. a. m., in addition, the ending of the 3rd person plural is never shortened to -ia . However, the number of exceptions steadily decreases in everyday use and accordingly with each new codification of the language. So it was said z. B. up to the 1990s píšúci (writing), mliekáreň (dairy), kamzíčí (belonging to the chamois), but since about 1997 already píšuci, mliekareň, kamzičí etc.

Sometimes a fourth group is also given, the so-called lowland dialects (Slovak dolnozemské nárečia ), which are spoken in today's south-eastern Hungary (around Békéscsaba ), Vojvodina (Serbia), western Romania and Croatian Syrmia , i.e. outside the borders of today's Slovakia. In addition to local influences, the dialect shows similarities with the Novohrad dialect.

For a more detailed description of the regions see List of Traditional Regions of Slovakia .

The Slovak script and its diacritical marks

This is how you write it on the web:

(All human beings are born free and equal in dignity and rights. They are endowed with reason and conscience and should meet one another in a spirit of brotherhood.)

The Slovak language is regulated, standardized and codified by the Jazykovedný ústav Ľudovíta Štúra SAV (Linguistic Ľudovít-Štúr Institute of the Slovak Academy of Sciences ). The current editions of the following 4 works are absolutely mandatory by law for any official use of the language:

Ján Doruľa and others (later editions edited by J. Kačala J., M. Pisarčíková and others): Krátky slovník slovenského jazyka. [Short dictionary of the Slovak language] (abbr. KSSJ; this is an equivalent of the German Duden - German universal dictionary):

Various authors: Pravidlá slovenského pravopisu. [Rules of the Slovak spelling] (abbr. PSP; this is an equivalent of the German Duden spelling dictionary):

Ábel Kráľ: Pravidlá slovenskej výslovnosti. (Rules of Slovak pronunciation) (abbr.PSV; this is an equivalent of the German Duden pronunciation dictionary):

With the support of the EU , the e-learning project Slovake.eu was created , which enables free language learning over the Internet.