The title of this article is ambiguous. Further meanings are listed under Vojvodina (disambiguation) .

The Vojvodina [ vɔjvɔˌdina ] ( Serbian - Cyrillic Војводина , German  Vojvodina and Vojvodina , Hungarian Vajdaság ) is an autonomous province in the Republic of Serbia . It makes up the part of the country north of the Sava and Danube , whose administrative border from the west mainly runs along the Sava (at the Belgrade district with an arc to the north) and further east to the Romanian border almost constantly along the Danube. The administrative headquarters are in Novi Sad , the second largest city in Serbia.

Vojvodina is home to many different ethnic groups. In addition to Serbs , who make up the absolute majority of the population with around 66.76 percent (2011), Hungarians , Slovaks , Croats , Romanians , Bunjewatzen , Šokci , Russians (Ruthenians), Roma , Germans live in Vojvodina as recognized autochthonous minorities and Bulgarians . 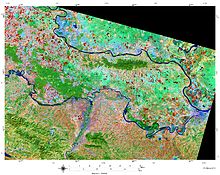 The land between the rivers Syrmia in a Landsat 8 ETM + image, March 12, 2014 (infrared false colors)

Most of the province is covered by the Pannonian Plain . In Syrmia the Fruška Gora, which rises to just over 500  m, runs through the province. Since 1960, the area around the mountain range is a national park , which also for the list of UNESCO - world natural and world heritage nominated. In the far east near Vršac the foothills of the Carpathian Mountains rise . The highest point in Vojvodina, the Gudurički vrh, is also located here with a height of 641  m . This makes Vojvodina an exception in landscape compared to the rest of Serbia, which is mostly mountainous.

The Vojvodina is crossed by three large rivers. The Danube initially forms the state border to the west and then flows through the province. The Tisza runs from the north and the Sava flows towards the Danube from the west, both of which ultimately flow into the Danube outside Vojvodina near Belgrade. Towards the east, the Danube divides Serbia into central Serbia and the province of Vojvodina.

The Vojvodina is divided into three historical regions by these rivers: Syrmia , Banat and Batschka . In the south-west, between the Danube and the Save, lies Syrmia (Serbian: Срем / Srem ). The Batschka (Serbian: Бачка / Bačka ) lies north of Syrmia . The Danube forms both the western and southern borders here, as the river here changes its course to the south and continues to flow in an easterly direction. The Tisza is the border between the Batschka and the Banat . The Banat lies east of the Tisza and north of the Danube. The Banat is divided into a Serbian and Romanian part by the state border in the east with Romania .

The administrative headquarters are in Novi Sad, the second largest city in Serbia. Other important cities are Ruma , Inđija , Sremski Karlovci and Sremska Mitrovica in Syrmia; Subotica , Sombor , Vrbas , Bačka Topola and Bačka Palanka in the Batschka and Zrenjanin , Kikinda , Pančevo and Vršac in the Banat. In the early days the Pannonian Sea (also Pannonian Sea or Lake Pannon ) was located here . The fertile soil of Vojvodina consists partly of deposits of marine fossils. Therefore, agriculture is very productive, which is why it is an important industry in Vojvodina.

Vojvodina in the Habsburg Empire 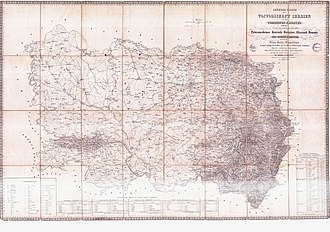 Voivodeship of Serbia and Timisoara Banat (1853)

The name Vojvodina is borrowed from the Serbian Vojvodstvo for military command or Vojvode for military leader. It is mentioned for the first time in May 1848 in the proclamation of the Voivodeship of Serbia and Temeser Banat for the areas of Syrmia , the Banat, the Batschka and Baranya in response to the Hungarian revolt against the Austrian imperial family.

Before 1848 the region was part of the Kingdom of Hungary , which in turn belonged to the Habsburg monarchy . Originally the Vojvodina consisted of the areas of Bačka and the West Banat, in which the Danube Swabians were settled in several so-called Swabian mountains in order to manage the arable land . The Austrian settlement policy (colonization patent from Empress Maria Theresa , settlement patent from Emperor Joseph II , policy from Prince Eugene of Savoy ), around the largely depopulated Pannonian plain after the Turkish Wars ( Danube Plain) to be populated with taxpayers. The historical and local assignment of the Danube Swabians for Vojvodina also overlaps with the Buchenland Germans and the Yugoslavia-Hungarians.

In 1850 the Crown Land Voivodeship of Serbia and Temeser Banat was established, but this was dissolved again in 1860 and the political order from before 1848/1850 was restored. Vojvođanska banka was founded in 1868 and is still one of the oldest companies in Serbia.

Until the end of the First World War in 1918, Vojvodina belonged to Austria-Hungary .

Interwar period and the Kingdom of Yugoslavia

After the victory of the Entente in World War I, to which Serbia also belonged, Vojvodina was added to the newly founded state of Serbs, Croats and Slovenes. With the dissolution of the Danube monarchy, the historic Banat region was divided into three parts by the Treaty of Trianon . Romania received the largest partial to Timisoara area. Serbia received the second largest part - located around Novi Sad, today's Vojvodina. Hungary received the smallest part - located around Szeged . The National Assembly of Vojvodina decided on November 25, 1918 to join Serbia.

Within the new state, which from 1929 called itself the Kingdom of Yugoslavia , Vojvodina together with Syrmia and part of the closer Serbia south of the Danube formed the Danube (Serbian: Dunavska banovina ) with Novi Sad as the capital. In the 1931 census, 342,853 inhabitants of Vojvodina identified themselves as "Germans" (i.e. as of German descent and German-speaking). Another 10,751 Danube Swabians had their residence in Belgrade. 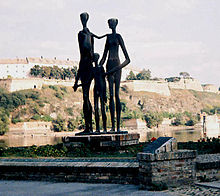 In 1941 German and Hungarian troops marched into Vojvodina. Germany and Hungary then divided them up: The Baranja and Bačka fell to Hungary, Syrmia to Croatia and the Banat was added to a Serbian state under German administration. In 1942 the notorious " raid " took place in Novi Sad. The Hungarian commander, General Ferenc Feketehalmy-Czeydner , had 1,246 civilians shot there from January 21 to 23, 1942, including 809 Jews, 375 Serbs, 8 Germans and 18 Hungarians. Several hundred civilians were thrown under the ice of the frozen Danube and drowned. Today a sculpture cast in bronze, on which a man, a woman and a child can be seen, commemorates the deed. Behind it are panels on which the names of the identified victims are engraved in Serbian and Hebrew script. During the entire war 50,000 people were killed and 280,000 were taken prisoner. One of the fiercest battles on the territory of the former Yugoslavia was fought by Josip Broz Tito's partisans and the German and Croatian fascists in the Srem ( Sremski Front ). In April 1945 Vojvodina was finally taken by the Red Army and immediately afterwards by the partisans. Most of the Danube Swabians resident there were expropriated and driven out. Thousands of people who stayed behind were interned in camps in Jarek , Gakowo, Novi Sad, Rudolfsgnad and other places and died there, 6,500 in the Jarek camp alone. Serious attacks on the Hungarian minority had already occurred in 1944 after Serb partisans drove out the Hungarian troops allied with Germany.

In 1945 a new political entity was created called Vojvodina, the Autonomous Province of Vojvodina. In this year Vojvodina was attached to the Yugoslav republic of Serbia as an autonomous province with Novi Sad as the administrative headquarters within its current borders (i.e. without the Baranja, but with most of Syrmia) . In 1974 Josip Broz Tito's constitutional amendment extended the autonomy status . After months of protests by the Serbs from Kosovo, supported by the Central Committee of the Union of Communists of Serbia and Slobodan Milošević, in the summer of 1988 against the provincial party leadership, it was forced to resign on October 6, 1988 and was replaced by cadres loyal to the Central Committee. As part of the constitutional amendments from that year, Slobodan Milošević effectively lifted the autonomy of Vojvodina at the beginning of 1989 . According to the Constitution of the Republic of Serbia of 1990, the province's autonomy status comprised far fewer powers than was the case in all previous socialist constitutions. Only after its fall did Vojvodina regain part of its old competences through the Omnibus Act in 2002, although still within the framework of the 1990 constitution. With the new Serbian constitution in 2006, Vojvodina's autonomy was expanded to include financial independence. In October 2008, the Vojvodina Parliament passed a draft constitution that is intended to tie in with the far-reaching autonomy status prior to the Milošević era. The opposition sees this as a separatist policy. The entry into force of the new constitution depends on the approval of the central parliament in Belgrade.

The DS ( Democratic Party ), LSV ( League of Social Democrats of Vojvodina ) and NDS ( New Democratic Party ) voted for a constitutional amendment on September 23, 2014. The status for the whole of Serbia is to be newly established and declared, where Vojvodina is to be granted more autonomy and independence. The SNS ( Serbian Progressive Party ), the SPS ( Socialist Party of Serbia ) and other small parties voted against it .

Chair of the Executive Board (since 1991)

Ethnic groups according to the 2002 census 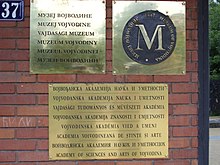 Blackboard with inscriptions in Serbian-Cyrillic, Serbian-Latin, Hungarian, Croatian, Slovak, Romanian, Russian and English at the Museum of Vojvodina in Novi Sad

The Vojvodina scored 2011 1.931.809 inhabitants, which follows distributed among the seven counties:

According to the census of 2011 (1991), the national affiliation is composed of

In the course of the disintegration of Yugoslavia and the wars and expulsions associated with it, many Serbs from Croatia, Bosnia and Herzegovina and Kosovo came to Vojvodina.

Six official languages ​​and their respective scripts are used in Vojvodina:

The Vojvodin Landtag is the founder and publisher of the following magazines, which appear in the respective official languages: