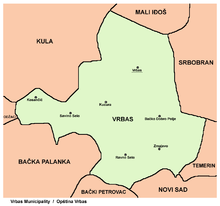 Vrbas ( Serbian - Cyrillic Врбас , Hungarian Verbász , Russian Verbas , German  Werbass ) is a town in the Južna Bačka district of the Serbian autonomous province of Vojvodina with 24,112 inhabitants; it is the seat of the municipality of the same name with 42,092 inhabitants. The place is on the Great Batschka Canal .

The current name goes back to the ancient Slavic word "vrba" = willow tree . This is a locative of the plural. A connection with the Bosnian place Vrbas, which goes back to the Latin basic word “urb” and is called Urbate, Verbate or Vrbate in several documents, can be ruled out according to the Slavic expert Franz von Miklosich .

The first written mention of Vrbas was in 1387. However, Vrbas dates back many centuries. Neolithic settlements were found during archaeological excavations . These were partly buried in the forest and wickerwork was found on the walls of the houses . Domestic and farm animals were also documented. Bronze Age settlements have also been found. With the arrival of the Celts began in the second half of the 4th century BC. The extensive use of ceramics , as well as the mass production of iron tools and weapons from the forge . In the area of ​​Vrbas there was also a Celtic oppidum , a fortified settlement with market and defense functions. From the 1st century BC The region around Vrbas belonged to the Barbaricum , which was adjacent to the Roman Empire and, according to the Roman conception, was inhabited by " barbarians ". During the Migration Period , the Sarmatians and Franks , but above all the Avars , Slavs and Bulgarians , advanced into the region and settled in the area around Vrbas. They were followed by Finno-Ugric tribes . Despite the first written mention of the city in 1387, the year 1213 is regarded as the year of foundation.

Mostly Slavs settled in the area of ​​Vrbas. Between the 16th century and the beginning of the 18th century it was mainly Serbs, some of whom had to leave their homes due to wars , floods and diseases . In addition, there were major changes in the ethical composition from 1720 onwards, as numerous Serbs moved to Russia or the neighboring Banat . On the other hand, Russians , Germans and later Hungarians moved to the region. The Russians first colonized Vrbas in 1745, and the Germans followed them 40 years later.

Today's Vrbas is located on the area of ​​the former mostly Serbian-settled Stari Vrbas (Old Werbass) and Neu-Werbass, which was founded in 1785 after Joseph II 's Edict of Tolerance, mainly by German Protestants .

The settlement of the Germans and the foundation of Neu-Werbaß

On December 21, 1781 the tolerance patent for Hungary was announced. The initiative came from Joseph II himself. Unlike Empress Maria Theresa , this edict also promised non-Catholics the granting of “settlement”, here the right to settle as well as civil liberty and equal rights.

According to the instructions of the Sombor administration on April 30, 1785, it was determined that three new villages ( Tscherwenka , Palanka and Neu-Werbass) should be founded for Protestant colonists during the so-called Josephinian settlement period . Sessional grounds had become free in and around Alt-Werbass because Serbs (Raizian camera inmates) had given up the fields that they could no longer or did not want to work on. As a result, 280 families with immigrants from the Reich could be given half a session each. A session usually comprised 32 yokes of 1100 square fathoms (corresponds to 18.5 hectares). Craftsmen and day laborers (14.3%) were settled in Kleinhäuslergasse. An administrative separation between the two communities Alt-Werbass and Neu-Werbass took place after geometrical measurements by the geodesist Köröskényi by means of newly created heaps of earth. In 1824 the Protestant church was completed. Before that, the services took place in provisionally erected prayer houses . The Protestant school was founded in 1798. Around 1830 there were around 200 German Catholics in Alt-Werbass. They initially belonged to the parish of Kula . There is evidence of a Catholic school in Alt-Werbass since 1830.

From the 19th century the Great Batschka Canal was built, which runs next to Vrbas and served on the one hand for irrigation of the fertile arable land and on the other hand as an inland waterway between the Danube and Tisza .

In March 1883 the Budapest - Semlin railway and the Neu-Werbaß station were opened. The newly built station was built as a transfer station of supraregional importance, because the Sombor - Senta line was to cross here in Neu-Werbass .

After the Yugoslav People's Liberation Army and partisans marched in at the end of 1944, the two communities were united to form the city of Vrbas, and the city's newly formed administration was called "Mesni odbor".

With the beginning of the Second World War , all men of the village capable of military service were drafted into military service by the Yugoslav Army and fought against the Axis powers. After the surrender of the Yugoslav army, Vrbas became part of the Kingdom of Hungary again. The Danube Swabian and Hungarian residents of Neu Werbaß (now part of Werbaß) were quickly released from captivity. These men became Hungarian citizens and became conscripted in Hungary and after the beginning of the Russian campaign they were also drafted into the Hungarian army. In the later course of the war, due to an agreement between Hungary and the German Reich, the residents of the town of German origin were forced to join the Waffen SS . Most of the older generation reported to the "Hipo" (auxiliary police) in order to avoid military service.

On October 8, 1944, the Wehrmacht gave the order to evacuate . However, this order caused confusion. It came too late and was not clear, so that a large part of the German population stayed in their homes. The Red Army moved in on October 19, 1944 , and on November 6, 1944, the partisans took command in both places.

In March 1945 the non-fled population of Vrbas was selected by the partisans into those who were able to work and those who were unable to work (elderly people, children, etc.). The Danube Swabians able to work were deported to various forced labor camps (mostly located in former villages inhabited by Germans) or to the Soviet Union . The group selected as unable to work was sent to the Jarek , Gakovo and Kruševlje extermination camps , where a significant part of this group either starved to death or died of disease. It was not until 1948 that the camps were closed under pressure from the Red Cross. The surviving Danube Swabians were initially not allowed to leave Yugoslavia and were only allowed to leave for Germany from 1950 after paying a bounty of around 5 gross monthly wages. All German-speaking residents of Werbass were expropriated and expatriated without compensation due to their ethnicity with the help of the Avnoj decrees in 1944. Among the 745 fatalities in the place, those who perished in the deportation of civilians from the Banat and the Batschka to the Soviet Union carried out by the Tito regime in 1944/45 are also taken into account.

Under communist rule, Vrbans was renamed Titov Vrbas (Titos Vrbas) in honor of Josip Broz Tito . At the beginning of the 1990s, this addition to the name was deleted again.

The handball club RK Vrbas , founded in 1954, currently plays in the 1st Serbian handball league. A former well-known player for the club is Milan Torbica .

Census of the Kingdom of Yugoslavia 1931

The census of the Kingdom of Yugoslavia in 1931 gave the following results for the two communities Stari Vrbas and Neu Werbass:

Note: “Other Christians” are Old Catholics and Orthodox from Ukraine and Bulgaria. Danube Swabians, Croats and Hungarians are among the “Roman Catholics”. There were Jews in both communities too.

2011 Census of the Republic of Serbia

Also of great cultural value is the chapel of St. Prophet Elias , built in 1793 , also known as Kapela Vodica . It is built in the typical chapel style of Vojvodina and Slavonia and was initially dedicated to St. Venerable Mother Petka Paraskeva.

It stands on the outskirts of Vrbas in the direction of the village of Bačko Dobro Polje and the capital of Vojvodina Novi Sad .

There are also two Greek Catholic churches (Uniate churches) in the city. The Church of the Protection and Intercession of the Virgin Mary, built from 1938 to 1944, is a mixture of the traditional architectural styles of Vojvodina and Ukraine . It is dedicated to the Solemnity of the Virgin Mary Protection and Intercession . In front of today's church there was an older Greek Catholic church built in 1892.

The Evangelical Lutheran Church , built around 1824, is located in the city center . In the nave there is a striking fresco depicting Martin Luther in front of the Worms court.

The Calvinist Church was built around the same time as that of the Lutherans (1820s), but is smaller than the latter due to the lower number of believers at the time. A striking feature and distinctive feature of the Calvinist Church is the star instead of the cross on the steeple.

In 1872 the first Roman Catholic school was opened in Vrbas. And in 1884 the Roman Catholic St. Mary's church was built, dedicated to the patron saint of the Immaculate Conception of the Mother of God Saints Maria .

Between the turn of the century of the 19th century to the 20th century one began Methodist Church work in Backa . The construction of the church began before the outbreak of the First World War , but it was not finished until 1921. Today the church has been completely renovated.

Churches of the city of Vrbas (gallery)