Slavonia (also Slavonia ; Croatian Slavonija , Latin Slavonia , Hungarian Szlavónia ; the " Slavonic Land ") is a historical region in eastern Croatia and is considered its granary . It extends in an east-west direction about 150 km between southern Hungary and Bosnia. A large part of the area of ​​Slavonia is taken up by the plains between the great Danube tributaries Sava and Drava . In the east it extends to the Danube and the Serbian border. 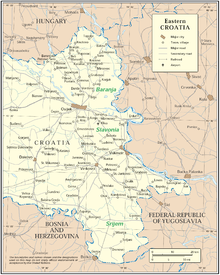 In the north, south and east of Slavonia, Slavonia consists mainly of the flatlands of the Pannonian Plain ; in the west and the middle there is an isolated low mountain range with the peaks Papuk (953 m), Dilj (461 m) and Psunj (984 m). The region extends east-west between the Drava (northern border with Hungary ) and the Save (southern border with Bosnia-Herzegovina ) and extends in the east to the Danube , the border with Serbia . The western border of Slavonia is not clearly defined geographically.

The vast majority of the population of Slavonia are ethnic Croats . The largest national minority are Serbs . There are also a large number of smaller nationalities, including a German-speaking minority of around 3,000 people in Eastern Slavonia .

2011 census data for the counties in Slavonia:

The largest cities in Slavonia are (population according to the 2001 census):

The area of ​​Slavonia is today administratively divided into five counties (Croatian županije ). These are:

In Slavonia the first known inhabitants were the Skordiskers , later the Pannonians , who were conquered by Emperor Augustus . The land then belonged to " Pannonia inferior " , but also had the name "Pannonia Savia" . At the end of the great migration, Slavic tribes under Avar sovereignty filled the land between the Drava and Sava (see for this the conquest of the Slavs in the Balkans ) and, as Pannonian Slavs mixed with Croats , came under Frankish rule, of which later the subsequent Sirmia , the former Gau the Roman city of Sirmium , which was called "Frankochorion" by the Byzantines.

The interstate of the Drava and Sava came under their rule since the rise of the Croatian princes and was called in Hungarian "Tótország" , "Slavonia" in Latin, "windy" land in German, in contrast to the adjoining South of Old Croatia (Hungarian "Horvátország" ) . Only after repeated battles with the Byzantine Empire did the area finally remain in Hungarian possession from 1165. It was not until Vladislav II. 1491-1516 that Beisatz et Slavoniae joined the Hungarian royal title rex Dalmatiae et Croatiae ( Dalmatia and Upper Croatia) .

The boundaries of the historical territory to which the name Slavonia refers have shifted significantly over time. In the Middle Ages , the entire part of the then kingdom of Dalmatia, Croatia and Slavonia , located in the Danube and Savo Plains , was called Slavonia (Latin Regnum Slavoniae ). The political center of medieval Slavonia was today's Croatian capital, Zagreb .

After most of the kingdom of Dalmatia, Croatia and Slavonia, with the exception of the area around Zagreb , had been conquered by the Ottoman Empire as a result of the Turkish conquests in the 16th century , Croatia was distinguished from Slavonia in the narrower sense ( Virovitica , Požega and Sirmia ). As a result, Zagreb became the political center of the rest of the area, i.e. the western part of medieval Slavonia. Since then the name Slavonia only refers to the eastern part of this area.

Under Emperor Leopold I all of Slavonia was recaptured and ceded to Austria in the Karlowitz Peace of 1699 , and the Kingdom of S (c) Lawonia was formed. While the south of Slavonia was established as a military border with the Ottoman Empire, the north came largely as a reward into the possession of generals and nobles who had participated in the Turkish wars .

In order to stabilize the fertile, but largely depopulated land in the border area to the Ottoman Empire, fortified farmers and settlers from the entire Habsburg Monarchy , but also from southwest Germany ( Danube Swabia ) and parts of southeast Europe controlled by the Ottomans were brought into the country. As a result, Slavonia has had a very mixed ethnic makeup for centuries.

After the First World War , the Yugoslav state emerged from the previously independent kingdoms of Serbia and Montenegro as well as the Kingdom of Croatia and from Slavonia and Dalmatia. The eastern part of Srijem was separated from Slavonia and is now part of Vojvodina .

The east and west of Slavonia, which had been assigned to the Yugoslav state of Croatia, were fought over during the Croatian war and were reintegrated into Croatia as part of the UNTAES mission (United Nations Transitional Administration for Eastern Slavonia, Baranya and Western Sirmium).

Čigoć was declared a European stork village in 1994.

Famous specialties of Slavonia are the kulen (a spicy hard sausage) and the white wines from Kutjevo , Ilok and Đakovo .

In the Kopački rit Nature Park there are floodplain and oak forests. The Slavonian oak , which is exported worldwide, is also known.

The wide plains, the floodplains of the Save and the wooded slopes of the Papuk and the Bilogora provide a habitat for large and small game and are visited by numerous hunting tourists.

Monument in front of the hospital in Vukovar

Historical regions of the Republic of Croatia