Slavonski Brod [ ˈslaʋɔːnskiː ˈbrɔːd ] is a city in eastern Croatia . It is located on the north bank of the Save , which forms the state border with Bosnia and Herzegovina here. On the south side of the Sava lies the neighboring town (Bosanski) Brod, which belongs to Bosnia, in a loop of the river .

The city is the seat of the regional self-government unit , the County of Brod-Posavina ( Brodsko-posavska županija ). According to the results of the last census from 2011, 59,141 people live in the city. It is the sixth largest city in Croatia and the second largest city in the Slavonia region after Osijek . The population consists mainly of Catholic Croats . Mayor is Mirko Duspara .

The hilly urban areas in the north (Brodsko Vinogorje and Podvinje) are largely loosely built up and are considered more affluent and quieter areas. On the eastern edge of the city, mainly industrial companies and shopping centers characterize the cityscape. The topography in the west and east is generally very flat. There are no natural elevations to speak of.

In the city center, in addition to the historic old town, there are also spacious residential complexes, which are loosened up by extensive green areas. In addition to the Save , the rivers Glogovica , Mrsunja and many other small streams in the north divide the city. Slavonski Brod extends in west-east direction for 9.5 km, in north-south direction for 9 km. The city boundary in the south corresponds to the course of the Sava and at the same time the state border. A few kilometers west of the city is the Ribnjak , a 10 km² lake area. 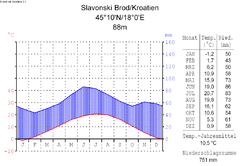 View of the Save with the bridge to Bosnia

There are a total of 18 districts, the exact boundaries of which, however, cannot always be clearly determined.

Slavonski Brod was first mentioned on July 20, 1224 under the Hungarian King Bela IV . However, a fortress named Marsonia already existed here in Roman times . Slavs settled there by the 7th century at the latest. Due to its strategic location on the border between the Habsburg and Ottoman spheres of influence, the city has repeatedly suffered from the military conflicts in the region over the years. Between 1715 and 1720, under the reign of Eugene of Savoy, the great imperial and royal frontier fortress Brod was built in the city as part of the military border . At that time the city was called Brod na Savi (German Brod / Broth an der Save ).

The economic and urban development of the small town, which at that time only had about 4,000 inhabitants, began around 1870. The city walls were torn down as early as 1871. In the following year 1872 the customs office, the district court and the tax authority were established. The municipal school was built in 1874. The first industrial areas, the brewery, the brick factory and the bridge over the Save were built in 1880. The bridge was also usable for the railroad from the beginning. In 1882 the railway line to Sarajevo was opened. This dynamic development of the infrastructure led to a significant boom in the economy and trade. After the sawmill was built in 1899, more and more companies were founded, especially in the years after 1904. On July 6, 1900, the fire station was built on the Save. In 1921 the Sparkasse Palace was finally built. Due to this development, the city already had 10,000 inhabitants at that time.

In 1923, the wood and furniture manufacturer Aleksandar Ehrman founded the wagon, machine and bridge factory in Slawonski Brod with the help of outside capital , which was named after the former leader of the Communist Party of Yugoslavia in Đuro Đaković Industrija šinskih vozila, industrijskih i energetskih postročnija i čniavons i Brod was renamed. Đuro Đaković and Crotram (locomotive construction) are now among the largest employers in the city. On May 29, 1934, the city was renamed Slavonski Brod (literally Slavonian ford ).

Even if the Second World War destroyed a large part of the building fabric of the city, it was able to recover quickly. In the years after 1960, many new residential complexes were built in the city, especially in the residential areas Slavonija I and II. From the second half of the 20th century, the city expanded mainly along the two settlement axes Zagrebacka Ulica (arterial road to the north-west) and Osijecka Ulica (Arterial road to the northeast). Some settlement areas on the outskirts were built entirely on the "green meadow".

Another important construction project in the 1980s was the Andrija Hebrang residential area , a residential complex consisting of five closed residential buildings with space for almost 10,000 people. The last block of flats was completed in 2005.

In connection with the military clashes in the Croatian War , the city was frequently attacked and suffered severe damage. 182 people died, including 27 children. There were also 591 civilians injured. Around 500 soldiers died in the fighting in the area. During the Bosnian War , the city was hit particularly hard by the influx of numerous refugees from northern Bosnia who fled the fighting there over the bridge. Some of these refugees, who were mainly Bosnian Croats, subsequently settled in Slavonski Brod or in the surrounding villages. The several times during the disputes, u. a. The bridge over the Sava, which was attacked by aircraft, was blown up on both sides during the Bosnian War and was only rebuilt in April 2000 by Croatian and Hungarian companies. The provisional pontoon bridge for the international military units stationed in Bosnia and Herzegovina to the west of the destroyed bridge was then dismantled. In connection with the reconstruction of the bridge, an international border crossing was also opened.

Since the winter of 2017, work has been carried out on the expansion of the 1.1 kilometer long Ulica Petra Svacica . This west-east axis north-west of the city center used to be a normal thoroughfare with one lane in each direction. With the completion of the construction work in spring 2019, the road received an additional lane and was thereby widened at the same time. Thanks to these structural measures, two lanes are now available for each direction of travel. The entire street has been upgraded and its appearance is similar to a boulevard. With these and similar traffic measures, the city administration hopes to reduce through traffic within the city center.

Slavonski Brod is one of the fastest growing cities in Croatia in the last 50 years, with the exact population of Slavonski Brod being disputed. Often one comes across outdated or inaccurate numbers. In 2001 the city had about 65,000 inhabitants. Slavonski Brod reached its peak in 1998 with 75,853 inhabitants. For 2008 one often finds information of 80,000 in the city and up to 120,000 inhabitants in the metropolitan area. The current figures are all based on estimates.

Slavonski Brod is located on the Zagreb - Lipovac - Belgrade motorway ( European route 70 / A3 motorway ) and the Zagreb - Vinkovci - Belgrade railway line . There are two motorway exits into the city: Slavonski Brod zapad (West, opened 1989) and Slavonski Brod istok (East, opened 1991). Both are 11.40 km apart. The western motorway exit from Slavonski Brod leads directly to the Jelas district or the city center and, since summer 2006, also to the border crossing to Bosnia and Herzegovina . This is mainly used for international road traffic, but is also used by pedestrians and cyclists in small border traffic to Bosanski Brod . The Croatian part of the border crossing was initially located directly on the northern bridgehead. However, the supply through the city center caused considerable inner-city traffic problems. A bypass road (3.1 km) built between 2004 and 2006 now leads through traffic from the western motorway exit via the comparatively loosely built-up district of Jelas directly to the state border. With the construction of the expressway, the border crossing was relocated around 300 meters further north. In connection with the construction of the new control point, the embankment for the railway crossing the Sava was also torn down. This branched off as a 1.5 km long siding from the city's train station to the border crossing in the south of the city until 2006.

Substantial efforts are continuously being made to improve urban infrastructure. New gas pipelines were laid across the board, the main town square (Korso) redesigned, a pedestrian zone set up, the riverside path on the Sava redesigned, etc. a. m. There are many public squares and 5 parks in the city, of which the city park in the center is the largest. 31 playgrounds and 6 stadiums are available. There are also larger residential complexes (Naselje Slavonija I & II) and bathing beaches on the Save. The length of the water pipeline network is 387 km. There are 14,730 water connections. The sewer system is 123 km long. The annual water consumption is around 4 million m³. The road network is 223 km long. There are 298 streets in total. The city has a bus station. There are four urban bus routes that connect the city center with the suburbs and run every 30 minutes from 6 a.m. to 11 p.m. In the south-west of Slavonski Brod there is an airfield with a 1200 m long taxiway that is not asphalted and is mainly used by small and sport aircraft. 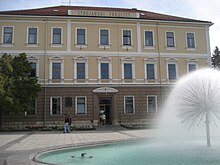 The Mechanical Engineering Faculty of the University of Osijek is located in Slavonski Brod .

The city was an important military fortress and, through its Franciscan monastery with a large library, formed an intellectual and cultural center. The most famous cultural event is the annual U svijetu bajki Ivane Brlic-Mazuranic children's festival (In the fairy tale world of Ivana Brlic-Mazuranic) , which takes place in May and June . The annual folklore show of folk art Broder Volksreigen takes place in mid-June and the festival of patriotic tamburical songs in May. The Sava artists' colony maintains the tradition of watercolor painting.

The Katharinen Fair ( Katarinski sajam ) is a traditional fair for handicrafts, wholesaling and retailing, at which traditional local products are primarily offered. It takes place every year from November 24th to 28th. This fair was held for the first time in 1769. It then took place annually until the beginning of World War II. This tradition was successfully revived in 1996.

The industry mainly consists of agribusiness and engineering companies. In the north of the city there is the area of ​​Đuro Đaković and the Crotram consortium. The industrial area Slavonija DI can be found on the eastern outskirts in the Bjelis district . 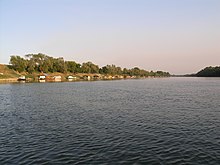 Houseboats on the Save

Sights are the old large fortress (Croatian: Tvrđava Brod ) from the Austro-Hungarian period; as well as archaeological sites that suggest that the area was settled 8,000 years ago , as well as from Roman times (Marsonija settlement). The main square in the center of Slavonski Brod is one of the largest in Croatia. It is named after Ivana Brlić-Mažuranić , a well-known Croatian children's book writer. The main square is often used for many events and celebrations. There are many galleries, shopping centers, cafes and bars on it. In the immediate vicinity of the city the visitor will find interesting hunting areas (Migalovci), fish ponds (Jelas polje), a lake (Petnja), beautiful orchards and vineyards, the Diljer massif, baths, etc. Many sports fields in the city and its surroundings are available to visitors to disposal. There are many bars, clubs and cafes and a large parade in the center.

The football stadium Kraj Save with a capacity of 8000 spectators is the home of NK Marsonia Slavonski Brod .
In the city there is also a women's football club, the ŽNK Viktorija Slavonski Brod.

Due to the large price difference between Croatia and Bosnia and Herzegovina, there is a lively shopping tourism from Slavonski Brod to Bosanski Brod on the Bosnian side of the Save. However, the regulations for so-called small border traffic have been tightened. By classifying the city as a municipality close to the border, the usual quantity limits, e.g. B. for cigarettes, significantly reduced for their residents.

The city is in the mystery novel Murder on the Orient Express by Agatha Christie , the next stop of the train when he gets stuck in a snowdrift and the murder occurs.

Towns and municipalities of the Brod-Posavina County