Vladimir the Great, engraving from 1889

Vladimir was a son of Grand Duke Svyatoslav I of Kiev and Malusha , a servant of Princess Olga . His year of birth is unknown, probably around 960. After his father's death in 971, Vladimir became prince of Novgorod , the second most important center of Russia, despite his unsuitable origins. His uncle Dobrynja supported him as a voivode. In 972, Olav Tryggvason , the future King of Norway, came to Novgorod with his mother. Their brother Sigurd served there as a Varangian .

977 a dispute broke out between his half-brothers Oleg and Jaropolk I. from. Yaropolk conquered Novgorod, where Oleg was killed. Vladimir fled to Norway to Håkon Jarl . He returned with a Varangian army and took back Novgorod. Then he conquered Polotsk , killed the local Prince Rogwolod and took his daughter Rogneda as his wife.

The capital Kiev fell into his hands without a fight . He then invited his half-brother Jaropolk to negotiations and had him killed, making him the sole ruler of the Kievan Rus.

The recruited Varangians, who had to be paid, presented a huge problem. He sent some of them to Byzantium , where they formed the core of the Varangian Guard . He used other Varangians, however, as administrators in the castles of his empire.

Vladimir consolidated his power through further campaigns. In 981 he conquered Tscherwen Castle and the Tscherwen Burgenland . On the southern borders of his country he settled "auxiliary peoples" who protected the empire (for example the Turkic Torki and Berendei). He led further campaigns against Vyatiches , Radimitschen , the Baltic Yatwingers and Aestians , the Volga Bulgarians and the Pechenegs .

Overall, he enlarged the Rus by subjugating the various neighboring peoples so that it already stretched under him from the Dnieper to Lake Ladoga and the Daugava .

Christianization of the Rus

The most important event of the reign of Vladimir was the Christianization of the Kievan Rus in 988 on the occasion of his marriage to Princess Anna of Byzantium , daughter of the Byzantine emperor Romanos II. For this he was nicknamed the saint and after his death became a saint of the Orthodox Church raised. Before his baptism , the legend of the saint describes him as a libertine with seven main wives and 800 mistresses. He had idols set up everywhere and was an avid follower of paganism . According to tradition, reason brought him to the Christian faith. Allegedly he sent scholars from all religions and chose the best. (Reply to the Muslim envoy: "Rus is the friend of the drink, we cannot be without it".) 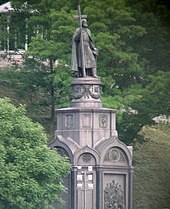 Statue of Vladimir in Kiev on the bank of the Dnieper , where, according to legend, the baptism of the Rus took place

In fact, Vladimir's baptism was a diplomatic move: the goal was to establish ties with the Byzantine imperial family. Emperor Basil II needed help against the Bulgarians , the common enemies of Vladimir and the Eastern Roman emperor. Vladimir sent an army of 6000 Rus to Constantinople . He also exerted pressure on the emperor by attacking the Byzantine Chersonese in the Crimea . Eventually he agreed: If Vladimir were baptized, Basil II would give him his sister Anna as his wife for military support . So it happened, and Vladimir I was the first European ruler to have a purple-born wife. The baptism of the Knjasen was celebrated in Kiev as a big act: after the pagan images of gods had been torn down, a mass baptism took place in the Dnepr . There does not seem to have been any open resistance to Christianization, although paganism was able to persist for a long time, especially in rural areas. Nonetheless, the church quickly began to build a network of churches and monasteries, which contributed significantly to the consolidation of the Kiev Empire. In addition, the region also developed culturally through the new faith. The orthodoxy had thus finally achieved a dominant position in the Rus. At the same time, Vladimir had become a figure of diplomatic importance through the acceptance of Christianity and the marriage connection with the Byzantine imperial family.

In connection with Christianization, the Old Bulgarian and Old Church Slavonic written language was adopted, not only in everyday church life , which led to the first southern Slavic influence .

The end of the rule

Secured in this way, he advanced the internal expansion of his territory. In new castle towns along the Dnieper tributaries, he settled Ilmenslawen (Slovenes), Kriviches , Vyatiches and Tschuden who were supposed to repel attacks by the Pechenegs . He entrusted the administration of the individual regions of the Kievan Rus to his twelve sons. However, this de facto division weakened the empire. A first serious conflict broke out during Vladimir's lifetime over the rich trading city of Novgorod. The heir to the throne Yaroslav , who was designated heir to the throne (after the death of his older brother Vysheslav), received this most important city after Kiev. In 1014 Yaroslav refused to pay tribute to his father. There was no more campaign against his son because Vladimir died on July 15, 1015.

Vladimir had numerous wives and concubines, such as Rogneda of Polotsk and Anna of Byzantium . His descendants were among others:

The Order of Vladimir was established in honor of Vladimir . In 1853 an imposing monument was erected in Kiev on the high Dnieper in his memory .

Another, iconographically similar monument was erected on the Kremlin wall in Moscow in 2016 . The bronze sculpture, which shows Vladimir with the sword on his belt and the cross in his raised right hand, is twelve meters high (with the cross 16 meters) and was created by the sculptor Salavat Scherbakow.

The main outer belt asteroid (2967) Vladisvyat is named after him.

Commons : Vladimir I of Kiev  - collection of pictures, videos and audio files