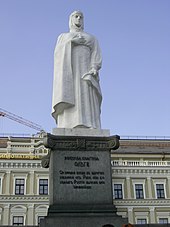 Monument to Princess Olga in Kiev

She is venerated in the Russian Orthodox Church as an apostle-like saint . Remembrance day is July 11th .

Olga was born in the Pskov area. Her parents were Varangians whose names have not been passed down. Your name Olga was probably derived from the Scandinavian Helga . According to the chronicle, in 903 at the age of thirteen she married Igor , who became Prince of Kiev in 912 . According to this information, she must have given birth to her son Svyatoslav I in 942 at the age of 52, which is unbelievable. That is why historians assume that she was born around the year 920.

In 944, Olga was mentioned again for the first time in a contract between the Kievan Rus and Byzantium .

In 945 Igor was killed by the Drewlyans . Olga took over the reign of her three-year-old son Svyatoslav I. On the Drewlyans, she retaliated with several campaigns. According to tradition, she had 5000 Drewlyans murdered at Igor's burial mound ( Kurgan ) and a Drewlyan delegation burned alive in a bathhouse. The capital of the Drewlyan Iskorosten is said to have burned down.

After the subjugation of the Drewlyans, they set up a system of fortified squares, tax collectors and hospitality rights in the newly conquered area, which represented a modernization of the dominant structure in the Kievan Rus , which until then had been based on the Druzhina . This system gradually spread to the remaining parts of the principality and led to extensive territorial rule.

The baptism of Olga. Painting by Sergei Kirillov , 1993

In 955 Olga was baptized in Constantinople .

In 957 she was received again lavishly by Emperor Constantine VII Porphyrogennetus in Constantinople.

In 959, Olga asked the German King Otto I to appoint a bishop and help with the Christianization of the Kievan Rus. The embassy represented an effort for more independence from Byzantium, Olga tried to build strong connections to the western empire.

Then the monk Adalbert came to the east as a mission bishop. In 962 he returned:

“That year, Adalbert, who had been appointed bishop of Russia, returned because he had failed to accomplish what he had been sent to do and saw his efforts in vain. On the way back some of his companions were killed, he was able to save himself with great difficulty. "

In Kiev, however, remains of a rotunda from the 10th century were discovered during archaeological excavations.

Svyatoslav ruled Kiev since 964 at the latest. He is not known to have been baptized.

The renewed Christianization took place in 987-988 under the Byzantine Orthodox auspices and from then on shaped the religious affiliation of Russia .

She is mentioned as the wife of Igor in the Nestor Chronicle .

In 1911 a monument was erected in her honor in Kiev, which was overthrown by the Bolsheviks in 1919 and rebuilt in 1996.

The Order of Princess Olga has been awarded by the Ukrainian President since 1997 .