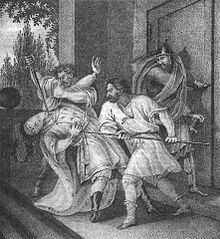 He was the son of Svyatoslav I , from whom he took control of Kiev when he embarked on his second campaign against Bulgaria . His brother Oleg received the recently conquered land of the Drewlyans and his brother Vladimir Novgorod . After the death of his father Svyatoslav in 972, fighting broke out between Jaropolk and Oleg, in the course of which the latter was killed. Vladimir then fled to Scandinavia and Jaropolk thus gained sole rule over the Rus.

However, three years after his escape, Vladimir returned from Scandinavia with the Varangian warriors and advanced with his troops against Jaropolk. Jaropolk initially fled Kiev and was later killed by his warriors when he wanted to negotiate with Vladimir.

During his reign, Jaropolk probably made contact with the Roman-German Emperor Otto II . According to the controversial Joachimschronik , Jaropolk may have tried to resume the Christianization that had begun under his grandmother Olga and has since been pushed back.