The title of this article is ambiguous. Further meanings are listed under Rostow (disambiguation) .

Rostov ( Russian Ростов ) is a Russian town in the Yaroslavl Oblast with 31 792 inhabitants (as of October 14, 2010), approximately 225 km north-east of Moscow on the railway line Moscow-Yaroslavl , who also trains the since the 1930 Trans-Siberian Railway sail becomes. Rostov is located on Lake Nero and is therefore also called Rostow Jaroslawski or Rostow am Nero , in contrast to Rostov-on-Don . It belongs to the Golden Ring of Russia and is an important tourist center. Up to the 18th century the city of Rostov was called Veliky (in today's Russian spelling Росто́в Вели́кий ), which means something like "Greater Rostov".

Rostov is one of the oldest Russian cities. In the Nestor Chronicle Rostov is mentioned for the first time for the year 862nd Around 988 it became the seat of an independent sub-principality under Yaroslav the Wise . In 991 one of the first eparchies (diocese) of the Kievan Rus was built here. Prince Boris was murdered in 1015 . He became the first saint of the Russian Orthodox Church .

1113 Rostov was again the seat of a principality under Yuri Dolgoruki . In 1125 he moved the prince's seat to Suzdal in order to evade the influence of the city's boyars . From 1207 to 1219 the city was once again the center of a principality under Konstantin Vsevolodowitsch . At that time it was a densely populated city with a royal court, boyar seats and vigilante groups. Merchants and artisans made up the majority of the population. In 1238 the city was destroyed in the course of the Mongol invasion.

1474 acquired Grand Duke Ivan III. Rostov for the Grand Duchy of Moscow and Rostov lost its political relevance. In cultural, architectural and religious terms, however, its importance grew in the following centuries. Annual fairs since the 18th century and the establishment of textile manufacturers in the 19th century determined the economic development of the city. 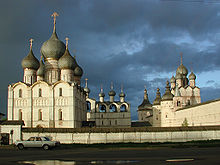 The city has a variety of architectural attractions, including the Kremlin with the Uspensky Cathedral and many other churches, as well as the Prince's Palace, an outstanding example of secular architecture. The world-famous Big Bells in the Kremlin, which Hector Berlioz visited in 1869, deserves special attention in order to experience with his own ears the various melodies of the bell for which the Rostov bell ringer were world famous.

Furthermore, the arcades in the old town and the Redeemer Jacob Monastery in front of the city should be emphasized, which has old Russian and very splendid classical architecture. There are also several monasteries around the city such as the Abraham Monastery and the famous Boris and Gleb Monastery .

Wall painting of the temple in Rostov the Great