Chaim Weizmann ( Hebrew חיים ווייצמן; also Chaijim Weizmann or Haim Weizmann ; born on November 27, 1874 in Motal near Pinsk , today Belarus ; died on November 9, 1952 in Rechovot , Israel ) was a chemist , President of the World Zionist Organization , Israeli politician and Zionist leader and between 1949 and 1952 the first Israeli President .

Chaim Weizmann was born as the son of the timber merchant Oizer Weizmann. After Cheder and high school , Weizmann studied in Darmstadt from 1892 at the Technical University . He also taught at the Jewish school in Pfungstadt until 1893 . From 1894 he studied chemistry at the Royal Technical University in Berlin . In 1897 Weizmann went to Freiburg , Switzerland , where he received his doctorate in 1899 with the grade summa cum laude . In Switzerland he promoted Zionism among Jewish students from the Russian Empire and founded Zionist associations in Bern , Lausanne and Geneva as well as the Jewish publishing house . As early as 1901 he taught as a lecturer in biochemistry at the University of Geneva and from 1904 as a professor at the University of Manchester .

In 1906 he married the doctor Vera Chazmann . The couple had two sons. The younger son Michael served as a pilot in the Royal Air Force during the Second World War and was shot down over the Bay of Biscay .

University of Geneva , first academic home as a lecturer in biochemistry

In 1910 Chaim Weizmann became a British citizen and during the First World War he was director of the ammunition laboratories of the Royal British Admiralty from 1916 to 1919. He became famous for developing a new enzymatic synthesis for acetone , acetone-butanol fermentation by the bacterium Clostridium acetobutylicum . The availability of acetone, which is necessary for the manufacture of the smokeless gunpowder cordite , was critical to the success of the Allies. He held several important patents for this work. In 1919 he left the British civil service.

In addition to his studies, Weizmann took an early interest in the idea of ​​Zionism developed primarily by Theodor Herzl in his book Der Judenstaat . Even if he missed the first Zionist congress in Basel in 1897 , he now increasingly advocated the idea of ​​a separate Jewish state. Accompanied by Yehoshua Hankin , Weizmann traveled for three weeks through Palestine in September 1907 and visited Jewish settlements. Until 1908, Weizmann was primarily committed to uniting the two varieties of Zionism: Against the Uganda plan and similar considerations relating to Argentina or South Africa , Weizmann advocated Palestine as the area in which the Jewish state would be realized should. Weizmann's second demand was that a state and not just a cultural community should emerge in this area. The synthesis of Political Zionism , which preferred the idea of ​​the state, and Practical Zionism , which preferred the settlement of Palestine, united the movement for the first time and thus became one of Weizmann's greatest successes, to which came the success of the Balfour Declaration of 1917 in terms of foreign policy . Also Nahum Sokolow had part in it. Weizmann also supported the construction of Jewish settlements in Palestine.

On April 3, 1918, Weizmann and a delegation visited Edmund Allenby at his headquarters in Bir Salem to demand Palestine as a state for the Jewish people after three days of antichambration . Allenby replied quietly that his job was warfare and conquest, and that London was responsible for politics and affairs of state.

At the Paris Peace Conference on January 3, 1919, as head of the Zionist delegation, he signed the Faisal-Weizmann Agreement together with the Emir Faisal , in which the strengthening of Jewish immigration to Palestine and Muslim control over the Muslim holy places was agreed. However, due to further developments in Palestine, it did not come into force.

In 1921 Weizmann became President of the World Zionist Organization (WZO), which he remained with interruptions between 1931 and 1935 until 1946. Weizmann got help with the organization from the Prague publicist and close Kafka friend Felix Weltsch , who for years helped design the newspaper of the Zionist congresses. 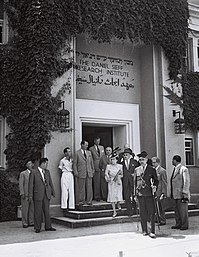 “I wish to make the most emphatic declaration that we Jews will stand on the side of Great Britain and fight for democracy. It is for this reason that we place ourselves under the overall guidance of the British Government on the smallest and greatest. The Jewish mission is ready to enter into immediate agreements in order to use all human-Jewish strength, their technology, their aids and all their skills in a useful way. "

- published in the London Times on September 5, 1939, three days later in the Jewish Chronicle on September 8, 1939

In 1929 Weizmann was temporarily elected President of the Jewish Agency . Two years later he was also given the office of the Zionist Federation of Great Britain. Between 1931 and 1935 he devoted himself more sustainably to his research. After Weizmann had been reluctant to accept the Churchill White Paper on the geopolitical regulation of the Middle East in 1922 and resigned in 1930 because of the Passfield White Paper , he now fought the MacDonald White Paper from 1939 , which almost completely withdrew the promises made in the Balfour Declaration. In the following years Weizmann found himself in the service of the Zionist cause, especially in Great Britain and the USA, diplomatically active. He met with the later US President Harry S. Truman to win him over to support the planned state of Israel. Two days before the German attack on Poland , on August 29, 1939, another offer was made to the Foreign Office in London. Chaim Weizmann wrote to Arthur Neville Chamberlain , then British Prime Minister :

“I wish to make the most emphatic declaration that we Jews will stand on the side of Great Britain and fight for democracy. It is for this reason that we place ourselves under the overall guidance of the British Government on the smallest and greatest. The Jewish mission is ready to enter into immediate agreements in order to use all human-Jewish strength, their technology, their aids and all their skills in a useful way. "

- published in the London Times on September 5, 1939, three days later in the Jewish Chronicle on September 8, 1939

During the Second World War Weizmann was an advisor to the British Ministry of Supply. He carried out research in the fields of artificial rubber and high-density gasoline, since the Allied raw material sources for rubber had largely dried up during the Japanese occupation.

When the British Labor Party came to power in 1945 and failed to implement the prozionist policy it had announced before the election victory, Weizmann's dialogue with the British government was also questioned. In 1946, the 22nd Congress of the WZO did not re-elect him.

The Nakam men Joseph Harmatz and Abba Kovner (Nakam was a Jewish organization that had set itself the goal of taking revenge for the Holocaust in Germany since 1945) claimed in interviews that Weizmann had supported them in their plan to get around 22,500 in German prisoner of war camps to poison interned SS members with arsenic. The action was carried out, but did not have the desired effect. Only about 2300 SS men showed symptoms of intoxication; whether there were fatalities is still controversial today.

After the Second World War , Weizmann initially campaigned for the division of Palestine into a Jewish and an Arab state, as provided for in Resolution 181 of the UN General Assembly . In 1948 the British left Palestine. The Israeli declaration of independence was proclaimed on May 14th against the massive resistance of the Arab population of Palestine and the neighboring states . On May 17, 1948, Weizmann became President of the Provisional Council of State. On February 16, 1949, the constituent assembly elected Weizmann as the first president of the state. David Ben Gurion became Prime Minister and Minister of Defense . In 1949 Weizmann was elected to the American Academy of Arts and Sciences . In November 1951, Weizmann, who was already seriously ill with heart disease, was re-elected.

Weizmann, who together with the physicist Albert Einstein and others had been a co-founder of the Hebrew University of Jerusalem together with Hugo Bergman in 1918 and whose president he was between 1932 and 1952, founded and headed a research institute in his place of residence, Rechowot , called Weizmann -Institute became known.

Chaim Weizmann died on November 9, 1952 and was buried in the garden of his house - today part of the Weizmann Institute.

His nephew Ezer Weizman (1924-2005) was Israel's seventh President from 1993 to 2000. He was first a member of the Likud , but later switched to the Social Democratic Labor Party .