Monument to Romulus and Remus

It «is one of the few universities in Europe that offers a complete range of courses in more than one language of instruction, [...] is the only one where two languages ​​are consistently used in both teaching and administration».

The mission statement of the university includes quality (establishment of competence centers, mediation of first-class academic education and quality promotion), responsibility (ethical principles and requirements of social justice, climate of intellectual openness, the possibility to deepen the values ​​of Christian humanism) and willingness to enter into dialogue (openness to the world, with in- and foreign universities and colleges, participate in multicultural understanding - especially between the four national cultures - bilingual studies and degrees in German and French, external relations with the canton and city).

Students at the University of Freiburg: 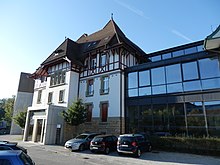 The university was established in 1889 when, on October 4th of the same year, the Grand Council (Parliament) of the canton of Friborg gave the green light for the establishment of the first university in “Catholic Switzerland”. The State Councilor Georges Python had fought tenaciously for this university . He managed to raise the necessary financial resources and convince politicians of the need for a university.

The college of St. Michael, founded in 1582, and in particular its theological faculty, are seen as the first nucleus of the university. The Dominican order sent from 1890 brothers from different provinces as professors of philosophy and theology. They bought a previous hotel, where they set up a convent and a student convict (Albertinum).

Another forerunner of the university was a law academy ("legal school") in Freiburg in 1763, which was located in the Albertinum and which was affiliated with the newly founded university in 1889 as a law faculty. The foundation of a university in a relatively small town was based on the wish of the Swiss Catholics that a university should also exist in a Catholic canton, and according to Python it should educate elites who protect the people from the dangers of modernity. Even so, the university was never officially a "Catholic university".

In 1941 the main building Miséricorde (Mercy), which is now a listed building and designed by Le Corbusier student Denis Honegger , was inaugurated on the Avenue de l'Europe in Freiburg .

In 2005, a new Pérolles 2 building complex was inaugurated, tailored to 3,500 students and taking into account the increase in student numbers. 11 large lecture halls (including the Auditorium Joseph Deiss, the second largest after the Aula Magna), a cinema and numerous seminar rooms as well as a third cafeteria have significantly increased the space available at the university. Organizational units distributed over many rental properties in Freiburg could be centralized, more remote locations (Portes de Friborg in Granges-Paccot ) were abandoned. In the immediate vicinity of Pérolles 2 were Academy of Sciences of Freiburg , the University of Freiburg economy and the vocational school Freiburg newly built so that a Campus Freiburg has emerged.

There are 5 faculties that offer a wide range of courses. All the following numbers for students and professors refer to the end of 2018:

Seven faculty and seven inter-faculty institutes as well as one inter-institutional institute are also included. The guiding principles of the training are multilingualism (German-French) and the study of contacts and relationships between the cultures of then and now.

Six institutes (Institute for Federalism, Institute for European Law, Institute for Religious Law, Institute for Building Law, Institute for Law & Economics, Institute of International Business Law) also belong to it. The faculty is involved in the inter-faculty institutes for ethics and human rights, for family research and counseling, as well as the Swiss Center for Islam and Society. The curriculum includes national and international law; these areas can be studied bilingually. As a special feature, the faculty enables linguistically gifted students to take part in the “bilingual plus ” training program, which imparts profound knowledge of the German and French language and culture.

The theological faculty is the largest and most international in Switzerland and, besides Lucerne, the only Catholic theological faculty at a state university in Switzerland. 386 students (295 men, 91 women) are supervised by 21 professors (18 students per professor). The 5 departments are Biblical Studies, Patristic & Church History, Faith and Religious Studies, Moral Theology and Ethics and Practical Theology. The faculty is also represented in six interdisciplinary areas: Institute for Ethics and Human Rights, Institute for Antiquity and Byzantium, Swiss Center for Islam and Society, Institute for Family Research and Family Counseling, Center for European Studies; Environmental Science Coordination Office.

Faculty of Economics and Social Sciences

At the Faculty of Economics and Social Sciences , 1,487 students (760 men, 727 women) are supervised by 35 professors (42 students per professor). You are enrolled in one of five bachelor's or master's degrees. The faculty consists of the following four departments: Business Administration , Economics , Informatics and Media and Communication Sciences . The International Institute of Management in Technology (iimt) and the Association Management Institute (VMI) are also affiliated to the faculty .

2'034 students (1'031 men, 1'003 women) are supervised by 77 professors (26 students per professor). 360 people (124 men and 236 women) study in the medicine department. Since autumn 2019, the university has also been offering a master’s degree in human medicine, after the first year of medicine was completed in 1896 and the second year of study in Freiburg since 1938. Since 2009, the bachelor's degree (3 years) has been offered entirely in Freiburg. The Faculty of Mathematics and Natural Sciences was founded in 1896 and comprises seven departments in two departments: Mathematics and natural sciences with biology, chemistry, geosciences (areas of geography and earth sciences), computer science (inter-faculty in cooperation with the economics and social sciences faculty), mathematics, physics and Medicine with the fields of pharmacy, biochemistry, human medicine (formerly also dentistry), biomedical sciences and sports and movement sciences.

Other academic institutions and inter-faculty institutes

A central cantonal and university library (KUB) and several decentralized libraries (faculty, inter-faculty and institute libraries ) at various locations are also available. The responsible librarians are organized in the “Constellation” working and coordination group.

The university offers study levels according to the Bologna Process :

A numerus clausus is used in medical studies; the aptitude test for medical studies must be completed. Certain educational qualifications or degree certificates are required for admission to the bachelor's degree. Certain equivalences must be present for foreign school-leaving certificates. Country-specific minimum average grades or minimum scores for the Abitur may also be required (for admission 2019 Germany e.g. 2.5).

Management of the university

The Senate is the university's highest decision-making body. The Senate consists of twelve members, half of which are selected by the state and the other half by the university community. The President is Philippe Savoy as a member appointed by the Grand Council .

The rectorate is the governing and executive body of the university. Members of the rectorate are the rector Astrid Epiney and four vice rectors : Rolf Ingold for research, IT and innovation; Chantal Martin Sölch for teaching, further education and equality; Franz Mali for promoting young talent; Bernard Ries for alumni and libraries, international relations, digitization and interdisciplinarity.

The extended management includes Fabian Amschwand as General Secretary, Lukas Bucher as Academic Director, Monique Bersier as Administrative Director and Alexandre Gachet as Director for IT.

The plenary assembly elects the rector. The date is usually set 15 months before the end of the term of office. The general assemblies of the four bodies of the university (professors, research assistants, students and administrative & technical staff) elect the delegates.

The conference of deans is convened at least once per semester by the rector. In preparation for the decisions of the responsible bodies, important topics relating to the university's strategy and development are discussed there.

The University Council is an advisory body to the State Council. 13 people sit on the University Council, four are appointed by the Swiss Bishops' Conference , the rest by the cantonal Education Directorate. The president is Sabine Premand Sperandio. The council goes back to an agreement between the State Council and the Swiss bishops, who committed themselves to financial support for the university in 1949.

Alumni and Friends UniFR is an independent alumni association and aims to bring together the graduates of the University of Freiburg and people close to them, as well as maintaining ties with the institution and contributing to its development. The president is Mireille Kurmann-Carrel from Lucerne. Regional groups exist in Zurich and the surrounding area, Ticino, Lucerne and Central Switzerland as well as Eastern Switzerland and Liechtenstein. We work closely with four faculty and departmental associations:

The central president of the Swiss Student Union, Anton Augustin , and six of his predecessors took the initiative in July 1890 to found the University Association (la Société académique fribourgeoise). The constituent assembly took place on January 19, 1891. The aim was to contribute to the moral and financial development of the University of Freiburg and the associated academic institutions.

Personalities from the University of Freiburg