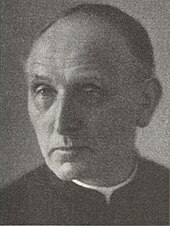 Wilhelm Schmidt SVD (born February 16, 1868 in Hörde (now Dortmund), † February 10, 1954 in Freiburg im Üechtland ) was a German-Austrian Roman Catholic priest , religious scholar , linguist and ethnologist . He was the founder of the “Vienna School” of culture circle teaching , which tried to create a universal history of culture, and at the same time the most important worldwide comparative linguist of the first half of the 20th century.

Wilhelm Schmidt was the son of a steelworker. The pastor of his home parish persuaded him to join the school of the Missionaries of the Divine Word (Societas Verbi Divini) in Steyl (Netherlands) founded in 1875 after finishing primary school. There Schmidt made his Abitur in 1888 and then entered the order. He was ordained a priest on May 22, 1892 in Steyl.

From 1893 to 1895 he studied Oriental languages ​​and Islamic theology with Martin Hartmann at the Department of Oriental Languages ​​at the University of Berlin . Schmidt's superior appointed him for a professorship at the Austrian training house of the order, the Missionshaus St. Gabriel in Mödling . It was from here that Schmidt developed his activities in the following years and shaped the Vienna School of Ethnology.

In St. Gabriel, Schmidt first taught Greek from 1895, later also Hebrew and rhetoric. In 1896 the Order began its missionary activity in Papua New Guinea . The correspondence with missionaries in New Guinea and Togo aroused his interest in the language and culture of indigenous peoples . At the same time he made contact with Viennese orientalists and ethnologists, so that his autodidactic knowledge extended to wide areas of Asia, Africa, Polynesia and Melanesia . His comparative language studies soon found recognition in the academic circles of Vienna. Like other of his confreres, Schmidt took Austrian citizenship in 1902.

In 1906 he founded the journal Anthropos , an international journal for ethnology and linguistics, at the St. Gabriel Mission House . On September 27, 1906, at the annual meeting of the Görres Society in Bonn, he gave a lecture on The Thought of Development in Religious Studies . The lecture became the starting point for his work, which was interrupted by war and ended in twelve volumes, The Origin of the Idea of ​​God . During the First World War he was field chaplain of Emperor Karl I.

Since 1921 Schmidt was a lecturer at the chair for anthropology and ethnography at the University of Vienna . From 1924 to 1927 Otto Reche headed this institute under the primacy of race research. After Reches moved to Leipzig, the research fields of ethnography and physical anthropology were separated in Vienna. In 1929 Schmidt initiated the Institute for Ethnology, which was headed by his brother Wilhelm Koppers . The Viennese culture circle theory was the predominant doctrine at this institute.

In 1925 Schmidt was commissioned to view and document the holdings of the Vatican Mission Museum at that time, which was assigned to the Congregatio de Propaganda Fide , and to build up the permanent exhibition of a new museum corresponding to the state of the art of ethnological research. His brother Martin Gusinde supported him in this . The Pontificio Museo Missionario-Etnologico Lateranense opened in December 1927. Schmidt was director until 1939. At the end of 1931 he also became director of the new Anthropos Institute in Mödling. In connection with the founding of universities in Asia, Schmidt was able to undertake his only major trip abroad in 1935, which took him via the USA to Japan and China.

After the annexation of Austria , Schmidt was briefly arrested by the National Socialists and placed under house arrest. He was released again through intervention by the Vatican and emigrated to Rome in April 1938 and finally to Switzerland in November 1938. In the same year, the Anthropos Institute was relocated from Mödling to Château Froideville, a patrician house in Hauterive .

In 1941 Schmidt was offered a position at the University of Friborg (Switzerland) . He worked here until 1948, surrounded by members of his order such as Paul Schebesta , Georg Höltker , Wilhelm Koppers and Joseph Henninger . Wilhelm Schmidt died on February 10, 1954 in Freiburg im Üechtland at the age of 85. He was buried in St. Gabriel in Mödling.

Schmidt published, among other things, in the Catholic magazine Schönere Zukunft . He supported the later mayor of Vienna, Karl Lueger , and his Christian Social Party . Schmidt was an avowed opponent of the French religious historian Salomon Reinach (1858-1932), of materialism and communism. Schmidt was a declared anti-Semite. At Christmas 1933 he called for people not to buy in Jewish shops. Hans Waldenfels , on the other hand, refers to Schmidt's decision to relocate to neutral Switzerland after the annexation of Austria.

Schmidt's method consisted of the combination of constructive-synthetic theory formation with the endeavor to their historical-empirical verification. He endeavored to justify the Christian faith and to substantiate it scientifically with the help of his research. He tried to prove that there is an original unity between the different cultures and their religions.

In contrast to Leo Frobenius, Schmidt was not only a representative of diffusionism , but also of the concept of culture . Convinced of the existence of an "original monotheism ", he went in search of the "origin of the idea of ​​God". So he commissioned his friars to gather empirical material during their missionary trips to support the theory of an ideal primordial state of mankind, which is said to have ruled in earlier times. In this way he was able to process extensive material that numerous missionaries and co-workers from all over the world brought together.

Schmidt's thesis of a primordial monotheism was not shared by all scholars because it contradicts the paradigm of a higher development (see also: Dead ends in ethnological research on religion ) . The “Viennese School” he founded initiated an ethnographic research program carried out by Martin Gusinde (SVD) and other fathers in Tierra del Fuego and Africa, among others. It no longer plays a role in research today. Last but not least, the problem turned out to be that the original culture, original religion and original revelation reconstructed by Schmidt remain in an assumed prehistoric stage that cannot be further localized .

Schmidt also achieved significant achievements as a linguist. He was the first to present a scientific classification of the Australian languages ​​and, with his work on language typology, especially word order typology , was an important pioneer of Joseph Greenberg (cf. Schmidt 1926). In accordance with his ethnological and religious studies intentions, Schmidt tried to use related language areas to penetrate the primary languages ​​and through these to a common original language. Although linguistics subsequently paid greater attention to the languages ​​of the primitive peoples, which were only accessible orally, it did not convince Schmidt's basic linguistic thesis.