The CVP Switzerland - Christian Democratic People's Party (Fr .: Parti démocrate-chrétien (PDC), Ital .: Partito Popolare democratico svizzero (PPD), rätorom .: Partida cristiandemocratica Svizra PCD) - is one of the four Swiss government parties and since 1891 Federal represent . In the early days of the Swiss federal state, with its predecessor movements, it was the basin of the Catholic conservative forces and the main opposition to the liberal spirit that dominated the state . However, it is now in the middle of the political spectrum and represents Christian Democratic positions. 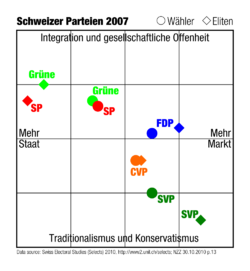 The CVP describes itself in its party program as liberal-social, whereby it wants to combine liberal principles with the guarantee of basic social rights in the sense of the so-called social market economy . The CVP sees itself as a representative for families and small and medium-sized companies. It also wants to strengthen medium-sized businesses.

The expansion of the party into the reformed cantons, in which the CVP pursues what it sees as a social and liberal policy, contrasts with the traditional role of the CVP as a state-supporting party in the Catholic home countries ( Central Switzerland , Valais , Ticino ); there the voter base is still made up of rather conservative citizens. Another reason is the dominance of the party in its home countries - in the canton of Lucerne it had three out of five members of the government until 2005, in Valais it is still the case - which forces a consensus course.

As a state-sponsoring party, the CVP sees itself as the central bridge-builder in Switzerland's federal system, which is based on compromise and concordance. Politics should be solution-oriented and future-oriented. The CVP's ​​policy covers all topics relevant to state policy (education and research, family, agriculture, public services and transport, security and state policy and law), but in the 2019 election year it will focus on the following areas:

Representation in government and parliaments

Associations of the CVP

The CVP has the following associations:

Catholics in the Kulturkampf

The Gasthaus Rossli in Ruswil , representatives of conservative Popular Movement 1840 peasant leader Josef Leu of Ebersol , the Ruswiler declaration that opposed the liberal zeitgeist. A little later, the " Ruswiler Verein " was founded in the same tavern , which later became the Catholic Conservative Party, which throughout the 19th century took a church-friendly and a federalist stance in the cultural struggle . The Catholic Conservatives were defeated in the Sonderbund War of 1847 and subsequently found themselves in clear opposition to the liberal majority in the federal state founded in 1848.

In contrast to the situation in the state as a whole dominated Catholic - Conservative politics in the rural Catholic cantons of central Switzerland , in Valais and Friborg , while in the Ticino gave a lengthy power struggle with the liberals. Like the Liberals, the Catholic Conservatives had neither a formal organizational statute nor a program. In 1882 the parliamentary group was officially founded. Attempts to found a national party (1874 “ Association conservatrice suisse ” by Abbé Joseph Schorderet and Theodor Scherer-Boccard , 1881 “ Conservative Union ” by Josef Zemp and Julius Schnyder von Wartensee , 1894 “ Catholic People's Party ” by Anton Augustin and Ernst Feigenwinter ) failed For decades on the federal structure of Switzerland and the differences in the Catholic-conservative camp.

The process of integrating the Catholic Conservatives into the liberal federal state began at the end of the 19th century. After several victories by the Catholic Conservatives, which they had won in various alliances, the liberals and radicals realized that their policy of isolation could no longer be maintained. In addition, with the rise of social democracy, they preferred a solidarity between the bourgeoisie . On December 17, 1891, Josef Zemp, a Catholic conservative, was elected to the Federal Council for the first time . Another important development at the turn of the century was that in addition to the traditional rural Catholic wing, a Christian social workers wing emerged, which found particularly strong support from Catholics who had emigrated to Protestant cantons, where the party was able to establish itself for the first time.

Catholic Conservatives in the interwar period

In 1912, the " Swiss Conservative People's Party " (KVP) was founded in the Hôtel Union in Lucerne , the Catholic Conservatives were thus linked for the first time in a formal Swiss organization, which in 1919 received a second seat in the Federal Council with Jean-Marie Musy . With the founding of the Christian Social Workers' Union in 1919, the Christian Social Workers' and White-collar Workers' Movement gained in importance in the party, which had previously been peasant, industrial and small-town. In the interwar period, models of an “authoritarian democracy” and even corporate state ideas found a certain support within the Conservative People's Party . The climax of this tendency was the so-called revision initiative , which was launched by parts of the Catholic conservatives together with the right-wing extremist fronts . After the clear rejection of this request in the referendum in 1935, the corporatist movement subsided again.

In the mid-1930s, the class struggle between the bourgeoisie and the social democrats took a back seat under the pressure of fascism and led to a political normality between the ruling bourgeois parties - FDP, KVP and BGB - and the social democrats. In 1943 the Liberals lost the government majority in the Federal Council. In the same year, the CIP received the post of Federal Chancellor for the first time .

Bloom in the 1950s and renewal

Supported by the political climate of the post-war period, the conservatives experienced a high point in the 1950s: They provided the largest parliamentary delegation in their history, and from 1954 to 1958 the party occupied a third seat in the Federal Council, which they did, however, as part of the integration of the Social Democrats in 1959 The Swiss system of government gave up again and was guided by the magic formula . With 23.4 percent in the Swiss parliamentary elections in 1963 , the party achieved the best result in its party history.

In 1957, the Conservative People's Party was renamed “ Conservative-Christian Social People's Party ” (KCV), as the state party comprised conservative or Christian social cantonal parties depending on the canton. After the Second Vatican Council from 1962 to 1965, the party called for adjustment to the changed society and the KCV implemented a programmatic opening that led to the party reforms of 1970/1971. The new center party often formed a coalition with the Social Democrats in social policy and with the Liberals in economic and financial policy , while it represented Christian conservative positions in cultural and church policy . A new name for the party was also sought during the reforms: some suggested the “ Christian Democratic Union ”, while other forces wanted to break out of the “ Catholic ghetto ” and suggested the name “ Swiss People's Party ”. (Today's Swiss People's Party was only founded a year later). In 1970 the decision was finally made to use the current name « Christian Democratic People's Party ». In the following decades the CVP was able to maintain its share of the vote, but the dissolution of the Catholic milieu , once the unifying bracket of the party, caused increasing problems.

Although the CVP assumed a dominant position in its home countries, the former Sonderbund cantons of Lucerne , Friborg , Wallis , Uri , Schwyz , Obwalden , Nidwalden and Zug and (since the beginning of the 20th century) in the canton of St. Gallen , it came from the 1980s Years of erosion caused by secularization, social mobility, the affluent society and the dissolution of the Catholic milieu. From 1980 onwards, the decline in the number of regular voters led to a steady decline in the results achieved in the federal elections. In the 1990s and early 2000s in particular, many conservative voters from their rural homeland were lured away by the national-conservative SVP . 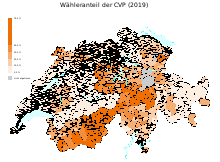 Party strength of the CVP in the 2019 National Council elections

Under the leadership of its President and later Federal Councilor Doris Leuthard , the CVP was able to temporarily halt its decline in the mid-2000s. Swiss media spoke of the Leuthard Effect . In the Swiss parliamentary elections in 2007 , the CVP was able to slightly improve its share of the vote. The CVP then formed a joint parliamentary group with the glp and the EPP for the 48th legislative period of the National Council (after the glp itself reached parliamentary strength in 2011, it became the CVP / EPP parliamentary group of the Federal Assembly ). A strengthening of the political center, combined with a claim to leadership in this, was cited as the basis for this. As a result, the CVP also worked in various cantons and municipalities with the EPP and glp as well as with the BDP , which was founded in 2008 as an SVP spin-off .

The following persons were or are as General Secretary of the CVP.

The following politicians were or are members of the CVP as Federal Councilors .

Current and former Federal Council parties of the Swiss Confederation