The Green Liberal Party Switzerland (glp; French Parti vert'libéral Suisse, pvl; Italian Partito Verde Liberale svizzero, pvl; Romansh Partida Verda-Liberala ? / I , pvl ) is a political party in Switzerland . It wants to combine a liberal economic and social policy with a sustainable environmental policy. The party has had 16 seats in the National Council since the Swiss parliamentary elections in 2019 and has seats in 15 cantonal parliaments. 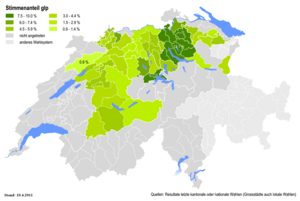 Green Liberal Party of the Canton of Zurich

The Green Liberal Party of Canton Zurich was formed in 2004 as a split from the Green Canton of Zurich , when Balthasar Glättli was elected President of the Zurich Green Party in place of Martin Bäumle . Almost 300 members joined the new party within a year.

The Green Liberals were initially represented by Martin Bäumle in the National Council and until May 2007 with Verena Diener in the Zurich Government Council. Both were originally not elected as members of the Green Liberal Party, but have converted from the Greens.

At the beginning of 2006, the green liberals ran for the first time in some municipalities with their own lists for the elections. In the cities of Winterthur , Uster and Opfikon , the green liberals were able to move into the municipal parliament with two seats each, but in the city of Zurich they failed due to the 5 percent hurdle (the rule that a party in at least one constituency has at least 5% of the votes must receive; see results of the municipal elections in Zurich ).

In the cantonal elections on April 15, 2007 , the glp was able to achieve electoral success and immediately won ten seats (out of a total of 180). As a result, the establishment of a green liberal party was sought in other cantons as well.

After the founding of the national party, the Green Liberals were able to record further electoral victories in the canton of Zurich. In the municipal council elections on March 7, 2010, they were able to move into the Zurich city parliament and were significantly strengthened in the other municipal parliaments. In the Zurich Cantonal Council elections on April 3, 2011, they achieved 10.3% of the vote and 19 seats (+9); in the cantonal elections on April 12, 2015, a 7.64% share of the vote and 14 seats were achieved. In 2018, Andreas Hauri, the first green-liberal city council of Zurich, was elected.

The green liberals of the cantons of Zurich and St. Gallen officially founded a national party on July 20, 2007. The two cantonal sections took part in the 2007 Swiss parliamentary elections . In the National Council elections, the glp won 1.4% of the vote and three National Council seats in the Canton of Zurich. The former Zurich government councilor Verena Diener was also elected to the Council of States in the second ballot .

For the 48th legislative period , the glp merged with the CVP and EPP of the National Council in a joint parliamentary group.

After the founding of the national party, sections were founded in most of the German-speaking cantons in the following two years ; in 2010 also in the French-speaking cantons of Geneva and Vaud. The Green Liberals competed in various cantonal elections in German-speaking Switzerland between 2007 and 2008 and were able to win between one and six seats in the cantonal parliaments . The glp won additional cantonal parliamentarians through transfers from other parties.

After Markus Stadler, the former non-party member of the Uri government , had been elected to the Council of States on May 20, 2010, he decided to join the glp, which has no cantonal section in Uri. The glp thus had two councilors.

The Green Liberal Party emerged stronger from the Swiss parliamentary elections in 2011 . She received 5.4% of the vote and 12 seats in the National Council elections, adding nine seats. For the first time, the Federal Assembly was able to form its own green liberal parliamentary group . The two Councils of States were re-elected. In contrast, the 2015 Swiss parliamentary elections resulted in a decrease to 4.6% of the votes in the National Council elections and - not least because of the lack of list connections  - only 7 seats. The two seats in the Council of States could no longer be occupied by the GLP after Verena Diener and Markus Stadler resigned. In the 2019 elections , the green liberals gained again: They won 16 seats in the National Council with a share of 7.8% of the vote , but they still remain without a Council of States.

The Green Liberals see themselves as the party of the political center and are therefore not left-wing like the Swiss Green Party . You want to consistently combine a liberal economic and social policy with a sustainable environmental policy. Differences to the Green Party exist especially in economic, social and financial issues. The Green Liberal Party tries to reconcile the economy with the environment.

The highest body of the Green Liberal Party of Switzerland is the Assembly of Delegates. It is composed of the delegates from the cantonal parties, with each cantonal party being entitled to four delegates. There are also other delegates depending on the electoral success of the respective section. In addition, the party's national, state and government councils and the members of the national executive committee are delegates with voting rights. Former members of the parliamentary group are also delegates. As a rule, there are four delegate meetings per year.

The board of directors is the party's strategic organ. The president of a cantonal party is an ex officio member of the board. The networks (women, GayLP, Young Green Liberals) are each entitled to one seat on the board. A deputy can be elected for each board member. The board members are elected by the delegates' assembly for two years. Also and ex officio members of the board are the party and parliamentary group presidium as well as the general secretary for advice.

The management represents the party externally and conducts day-to-day business. It consists of the party and parliamentary group presidium and (with an advisory vote) the general secretary.

In 2016, GLP members around Kathrin Bertschy founded the think tank glp lab , which sees itself as a “political laboratory for green, liberal and progressive” ideas. The glp lab is based in Zurich and is headed by the Zurich National Councilor Corina Gredig .

Member parties of the  Alliance of Liberals and Democrats for Europe