The Swiss Green Party ( GPS , Green Switzerland for short ; Parti écologiste suisse in French , Partito ecologista svizzero in Italian , Partida ecologica svizra in Romansh ) is an ecological Swiss party . She is a member of the European Green Party and Global Greens . The Young Greens form the nationwide Young Party.

The cantonal parties have great weight among the Greens. Accordingly, there are in some cases several parties in the cantons, all of which belong to the Swiss Green Party.

In the canton of Appenzell Innerrhoden - where there are generally hardly any parties or parliamentary groups - there is no separate Green Party. The Green Obwalden section founded on December 5, 2008 was dissolved at the end of 2009. 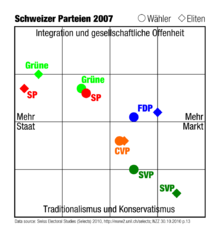 The traditional focus of green politics is environmental and transport policy, but the Greens are also active in all other areas of Swiss politics. In foreign and security policy, the Greens pursue a cosmopolitan and pacifist course; in social and economic policy, based on a basic social stance, they represent a relatively broad spectrum left of center.

A majority of the Greens support joining the European Union without being enthusiastic about the EU. However, a large minority also rejects accession. In matters of foreigners, the Greens are calling for an offensive integration policy and easier naturalization, especially for young foreigners. The Greens are in favor of increasing energy prices. The resulting income is to be used to finance social security.

A study conducted as part of the Swiss electoral studies at the University of Lausanne showed that the green candidates strongly advocated “more state” (against “more market”) and for “integration and social openness” (against “tradition and conservatism”). According to an evaluation by the Geographical Institute of the University of Zurich , the voting behavior of the Green Members of Parliament in the 2007-2011 legislature was conservative and left-wing . At smartvote , the green candidates are generally clearly left-wing and moderately liberal on the liberal-conservative axis.

In the course of the parliamentary elections in Switzerland in 2019 , the Greens called for a CO 2 law to be passed with the aim of reducing CO 2 emissions in Switzerland by 60 percent by 2030. By 2050, CO 2 emissions should drop to zero. Further demands were a binding plan to phase out nuclear energy , a strengthening of the social safety nets and a better work-life balance.

The Greens advocate the introduction of same-sex marriage .

Representation in parliaments and executive bodies

The Green Group after the 2019 parliamentary elections 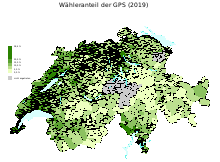 National and Council of States

The Swiss Green Party is by far the strongest party that is not represented in the Federal Council . In the 2015 parliamentary elections , the Greens had 7.1% of the vote . The Green parliamentary group thus secured 11 out of 200 seats in the National Council , which means a loss of four seats compared to 2011, as well as 1 out of 46 in the Council of States (Canton of Geneva ). Since 1999 the Greens have repeatedly called for a seat in the Federal Council in a center-left coalition excluding the SVP , but so far without success.

After the parliamentary elections in 2019 - with the Greens making up 13.2% of the vote - the Green parliamentary group decided that it would send the Green President Regula Rytz into the running for a single candidate in the 2019 Federal Council election .

In the cantons of Solothurn , Basel-Stadt , Basel-Landschaft , Bern , Waadt , Geneva and Zurich , the Greens are represented by one member each in the government. In various cities, the Greens are members of the community index executive , in Basel , Bern and Liestal the Greens are the city council.

The first Green Party in Switzerland was founded in Neuchâtel in 1971 by opponents of a motorway project who had therefore withdrawn from established parties. Its name was Mouvement populaire pour l'environnement (MPE) (People's Movement for Environmental Protection). In the following decade, similar parties emerged in different parts of Switzerland. In the 1979 elections , Daniel Brélaz from Vaud , who later became mayor of Lausanne , was the first Green member of the National Council.

There was a real wave of founding local green, ecological and alternative parties in the 1980s, in which the two groups mentioned above were perceived for the first time as part of a unified "green" movement. The differences between “cucumbers” (ecology is the main program, social issues more in the background) and “melons” (green outside, red inside: more socio-political and less ecological commitment) were still considerable. These two directions were also reflected in the two national umbrella organizations founded in 1983, the Federation of Swiss Green Parties (later the Green Party of Switzerland, GPS) and the Green Alternative Switzerland (GRAS, later the Green Alliance of Switzerland, GBS). These two groups competed in the 1980s before GPS prevailed in the early 1990s, which was also followed by most of the remaining green alternatives. This genesis, which ran from the bottom up, from local formations to the national party, also explains the sometimes different names of the Green Cantonal parties.

In the Swiss parliamentary elections in 1991 , the Greens achieved their best result up to that point with 6.1% of the vote and 14 seats in the National Council. This success was followed by a longer crisis that began in 1992 with the vote on the EEA , which split Switzerland and the Green Party. As was the case later in the referendum, a röstigraben formed within the party : The majority of the German-speaking Greens feared negative ecological consequences and fewer participation rights for the people, while the Greens in French-speaking Switzerland accepted the shortcomings (from a Green point of view) because they were closer to each other was more important to the EU . In the discussions that followed the EEA vote, the majority of the Greens were in favor of Switzerland joining the EU .

With the EEA vote, a shift in the focus in the political debates became apparent: ecological issues went out of fashion, but the European question and social problems (caused by the recession at the time) dominated the picture. The consequence of this development was the electoral defeat in 1995 (5.0% votes or 8 seats), after which the party was declared dead by many observers, including the then SP President Peter Bodenmann (whose party was one of the election winners). At the end of the 1990s, the Greens' share of the vote stabilized, in the 1999 National Council elections their share of the vote remained stable, and they were even able to win one seat.

In the Swiss parliamentary elections in 2003 , the Greens made strong gains and achieved 7.6 percent; With 13 seats, they were only one seat less than in the record year 1991. The previous hot summer was often blamed for this success in the media .

The four years between 2003 and 2007 were marked by strong wins by the Greens in cantonal and communal elections, during which the Greens were able to more than double their seats in cantonal governments. The split of the green liberals into two cantons initially clouded this picture only a little.

This development reached its peak for the time being in the Swiss parliamentary elections in 2007 . The Greens increased their share of the vote to 9.6% and achieved the best result in their history; they increased their number of seats in the National Council to 20. This result, to which the particularly intense climate discussion at the time had contributed, represents the best result of a “small” party (not part of the current Federal Council parties) since the introduction of proportional representation in 1919 In these elections, the Greens also succeeded in entering the Council of States for the first time , with two seats in the cantons of Vaud and Geneva.

Despite the Fukushima disaster in March 2011, the Greens failed to keep their seats in the Swiss parliamentary elections of 2011 . The share of the vote fell to 8.4 percent, the number of seats decreased to 15 seats in the National Council. The two Councilors of States Robert Cramer and Luc Recordon defended their seats.

In the 2015 elections , the Greens remained the fifth largest party, now with 7.1 percent of the vote . They lost their Vaudois seat in the Council of States and were only represented with one seat. The Green parliamentary group took on Denis de la Reussille, a representative of the Neuchâtel party . Thus the group of the Greens has 13 members. With Lisa Mazzone , a Green moved into the National Council as the youngest member of parliament. With Sibel Arslan from Basel , a Swiss woman of Kurdish origin is represented in parliament for the first time . Daniel Brélaz was elected to the National Council for the third time.

On April 16, 2016, Adèle Thorens resigned as Co-President. Regula Rytz presides from now on the party alone. On May 5, 2018, the green delegates confirmed Regula Rytz as president and elected a new vice-presidency.

In the federal elections in 2019 , the Greens won massively. They increased their share of the vote by 6.1% to 13.2% and gained 17 seats in the National Council, so that they will be represented by a total of 28 National Councilors in the 51st legislative period of the Swiss Federal Assembly . The Greens thus became the fourth largest party for the first time in terms of the national share of the vote. Five Greens were elected in the Council of States, with which the party achieved a historic breakthrough in the small chamber.

The Greens continue to support many referenda and popular initiatives and are often represented in the initiative committees. Some examples are the referendum against the procurement of the Gripen , the Correction Initiative , the Glacier Initiative as well as the Corporate Responsibility Initiative and the Transparency Initiative.

In spring 2020, the Greens demanded the impeachment of Federal Prosecutor Michael Lauber .