Basel-Landschaft ( abbreviation BL ; unofficially mostly called Baselland or the Basel area , French Bâle-Campagne , Italian Basilea Campagna , Romansh Basilea-Champagna ? / I ) is a canton in German-speaking Switzerland . It is part of the economic area of northwestern Switzerland and the cross-border metropolitan region of Basel . The main town is Liestal , while the most populous town is Allschwil near Basel .

The canton borders France in the west, Basel and Germany in the north . In the southwest to the cantonal border follows the canton of Jura of the French-German language border of Switzerland. The canton's area ranges from a few suburban communities near Basel in the north to small-town structures around the canton's capital Liestal to large forest and mountain areas around the Jura valleys in the south.

The canton is located in the north-west of Switzerland . With the exception of a few localities, it includes all the municipalities of the Laufental along the Birs, the Birseck and the lower Leimental ( Lower Basel region) as well as the municipalities along the Ergolz and its tributaries (Upper Basel region). The geographical shape of the canton is very irregular, especially because of the location of the neighboring Solothurnian Schwarzbubenland , the canton border also crosses several urban agglomerations .

In terms of area, it is one of the smaller cantons in Switzerland (18th place out of 26). Due to its dense population, however, it ranks 10th in the population. The division of Basel into the two half-cantons of Basel-Stadt and Basel-Landschaft took place in 1833 (see history below ).

In the south it borders on the motherland of the canton of Solothurn , of which some exclaves border on the canton of Basel-Landschaft to the west. The border with the canton of Jura runs in the extreme southwest .

The expansion of the canton is addressed in his unofficial but well-known hymn, the Baselbieterlied .

→ Main article : Coat of arms of the canton of Basel-Landschaft

The coat of arms comes from the city arms of Liestal . In order to better distinguish the two coats of arms, the red border was removed.

As of December 31, 2018, the population of the canton of Basel-Landschaft was 288,132. The population density of 556 inhabitants per square kilometer is almost three times the Swiss average (207 inhabitants per square kilometer). The proportion of foreigners (registered residents without Swiss citizenship ) was 22.9 percent on December 31, 2015, while 24.6 percent were registered nationwide. As of December 31, 2015, the unemployment rate was 3.1 percent compared to 3.7 percent at the federal level.

The official language of the canton and its municipalities is German . However, all cantonal and communal authorities are obliged to accept submissions in another official federal language .

As a result of modern migration and the formation of agglomerations, these boundaries are now very blurred, especially near the city of Basel. Some communities in the lower part of the canton now have a Reformed majority, while the area around Liestal now has a strong Catholic minority.

→ Main article : Direct democracy in the canton of Basel-Landschaft

The current cantonal constitution is dated May 17, 1984 (with changes since then).

From a political point of view, the Upper Basel area is more conservative than the lower part of the canton.

The people are also directly involved in legislation: 1,500 voters can apply for the enactment, amendment or repeal of a law or the constitution, which leads to a referendum ( popular initiative ). Constitutional amendments as well as legislative enactments that the district administrator enacts with fewer than four fifths of the members present are subject to a referendum ( mandatory referendum ). Decrees that have been adopted more clearly as well as resolutions on new one-off expenses of more than 500,000 francs or on new annually recurring expenses of more than 50,000 francs are subject to a referendum if it is requested by 1,500 eligible voters ( optional referendum ).

See also : List of cantonal referendums in the Canton of Basel-Landschaft

As a historic half- canton, the canton of Basel-Landschaft sends one representative to the Council of States and seven members of the National Council , the two chambers of parliament at federal level.

In the elections on March 27, 2011, Isaac Reber ousted the previous SVP representative Jörg Krähenbühl from the government. It was the first non-re-election of a previous person since 1950. Reber took office on July 1, 2011.

On December 13, 2012, Adrian Ballmer announced his resignation in mid-2013. In the election for his successor, Thomas Weber (SVP) was finally able to prevail on April 21, 2013 in the second ballot, after Eric Nussbaumber (SP) was still in the lead in the first ballot on March 3, 2013, but missed the required number of absolute votes.

The death of Peter Zwick on February 23, 2013 required a second government council by-election. This was canceled on June 9, 2013. Anton Lauber (CVP) was able to prevail clearly against Thomas Jourdan (EVP) in the first ballot.

See also : List of Government Councilors of the Canton of Basel-Landschaft

The highest cantonal court is the cantonal court , which was formed in 2001 from the previous higher court, constitutional court, administrative court and insurance court.

The courts of first instance are the two civil district courts for civil processes and the criminal court and the juvenile court for criminal proceedings.

At the communal level, the judges of the peace act as the arbitrating lower instance.

The canton of Basel-Landschaft intends to achieve a balanced state budget by 2016 and 100% self-financing by 2018. Because of this, among other things, all communities are to be strengthened and the five districts are to be converted into six so-called regional conferences.

The canton of Basel-Landschaft is divided into five districts: 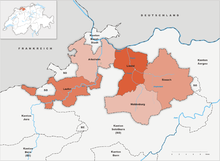 Districts of the canton of Basel-Landschaft

The Basel area is known for its picturesque Jura landscape in the Upper Basel area, and the cherry trees in bloom in spring are a frequent postcard subject. Numerous hiking trails connect mountain and valley. The Wasserfallen region at over 1000  m above sea level is particularly popular . M. , on which the Wasserfallenbahn (the only gondola lift in the region) leads from Reigoldswil . 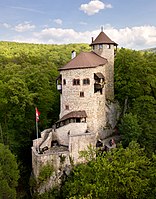 The Burg Reichenstein in Arlesheim

The Basel area is located on two main traffic axes.

The Upper Basel area lies on the main north-south traffic axis Germany / Benelux - Gotthard / Lötschberg - Simplon - Italy . The Autobahn 2 and the transit railway line run through the Basel area. From the canton capital Liestal , intercity and interregional rail connections lead to all of Switzerland.

Before the Napoleonic upheavals, parts of the Duchy of Basel and the subject area of ​​the city of Basel , which had joined the Swiss Confederation in 1501, were located on the territory of today's Canton of Basel-Landschaft . It was not until 1815 that nine parishes of the dissolved Principality of Basel came to the city of Basel through a decree of the Congress of Vienna , while the rest of the Principality was added to the Canton of Bern .

In 1832 the rural communities fought against the dominance of the still aristocratic city of Basel. The municipalities on the left bank of the Rhine constituted themselves as an independent half-canton of Basel-Landschaft and adopted a liberal, representative constitution. The new canton was recognized by the Swiss Confederation's daily statute in 1833 (see: Basler canton separation ).

The last execution in the canton was carried out on October 15, 1851, of Hyazinth Bayer, convicted of robbery and murder.

As a result of internal tensions, the canton gave itself several new constitutions in the 19th century: Limitation of disputes over jurisdiction in 1838 and 1850, breakthrough of the democratic movement in 1863, expansion of democracy, basis for promoting welfare and for collecting state taxes in 1892. Today's sixth constitution of 1984 brought another expansion of popular rights (including the first ombudsman of Switzerland) and, moreover, represents a formal new version of the constitution of 1892, which was amended more than two dozen times over the course of almost a hundred years.

In 1994, following a referendum, the former Bernese Laufental joined the canton of Basel-Landschaft.

Attempts at reunification with Basel-Stadt were made in 1936, 1969 and 2014, but failed each time. At the end of September 2014, the cantons of Basel-Stadt and Basellandschaft voted on a merger initiative aimed at establishing a joint constitutional council. It was accepted by 55 percent in the city canton, but rejected by over 68 percent in the rural canton and is therefore not pursued any further. In Basel-Landschaft, there has been a constitutional requirement for state independence since 1988, while the constitution of Basel-Stadt contained a reunification requirement until its total revision in 2006. 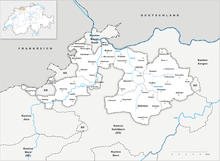 The following lists the political communities with more than 10,000 inhabitants as of December 31, 2018:

Districts of the canton of Basel-Landschaft

With the inclusion of the former Bernese Laufental, the original four became five districts (population as of December 31, 2018):