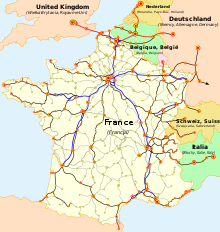 “All roads lead to Paris”, the TGV network (orange): A city as the capital and capital of an entire state

From the point of view of the administrative structure and spatial planning - with slightly different meanings - a main town or central place is the locality that represents the economic, intellectual or administrative center of a geographical area .

Differentiation between the main town and the central town

Central locations are places in which administrative , service , transport, cultural, educational and economic functions for a surrounding area are concentrated. Due to this concentration, such a place occupies an important position for its surrounding area (“excess of meaning”). Central locations, in turn, often form a hierarchy among themselves or build up a scheme of the division of functions of centrality. One such scheme is, for example, the system of central locations , which goes back to spatial studies in the 1930s. In addition, further scientific approaches and models for explaining the origin and function of centrality and central places have emerged.

In general, the bigger and more important a city is, the larger its potential catchment area. This applies not only to business and trade , but also to migrations to a city or between cities (spatial mobility). Various sciences deal with the patterns and probabilities of these processes.

With regard to the relationship between the spatial mobility or the area of ​​migration of city dwellers and the centrality level of their city, the following generally applies: the greater the property or the higher the level of education of a person, the wider the potential area of ​​migration and marriage circle . The wealthy and educated bourgeoisie of Leipzig , for example , had connections to Dresden, Wittenberg, Berlin, Erfurt and other cities of comparable centrality, but not to small towns like Wildenfels and Hartenstein near Zwickau .

The social mobility in Leipzig is mostly immigrants from cities with somewhat less centralized as Chemnitz , Schneeberg and Zwickau reserved, in turn, their newly promoted among immigrants from the smaller towns of the Erzgebirge have. Immigrants with little possessions usually come from the immediate rural area. During the Industrial Revolution , this influx also increased to the villages close to the city , which were then incorporated into the cities after 1890, which led to the development of large cities in Central Europe . Arise out of class and strata belonging to a person and the centrality degree of settlement specific probabilities of migration and marriage contacts in other cities, where the probability of physical distance and social distance always decreases as the rural population (see also social mobility ). Long-distance migration of the lower- class population, for example from Anatolia to Berlin-Kreuzberg , apparently invalidates these general principles, but they still apply overall. B. for the social advancement of these new lower classes.

Differentiation between main town and capital

A capital is the capital of a region , a district , country, state or historical territory ( residential city ). It is usually the administrative seat and does not necessarily have to be the seat of government . The capital does not have to be the largest or most populous place, or the capital as the economic and cultural center of the area, and does not even have to be part of the region in administrative terms, and vice versa, the spatial capital of the region is not the administrative capital. An example of a strong concentration of political and spatial aspects ("centralized capital") is Paris in France, an example of a decentralized concept is the European Union , which, due to the many capital cities in Europe considered to be of equal importance, has no or three capitals in the sense of Term ( Brussels , Strasbourg and Luxembourg ).

A capital does not have to be geographically central. Not every city is also the capital of a region, but it can apply to the people of the surrounding regions and to spatial planning and development as such if certain parts of the infrastructure are only available in this city. In poorly developed areas, the main locations are typically outside the region, which leads to migration and strengthening of the main location.

In the case of territorial consolidation, the place with the administrative seat is usually the new capital, as is the case in sparsely populated and scattered regions without a general center. Political-administrative and intellectual-economic aspects influence each other so that one aspect leads to the other in the course of urban development ( urbanization ) - examples are the establishment of historical settlements around monasteries and castles, which take on their function as the main town, and vice versa, new foundations or relocation from capital cities for economic policy reasons (such as Brasília or Ankara ). A prime example of a major urban development is Hong Kong , installed in a village region in 1842 as a trading port and colonial administration, today the central location of the whole of South East Asia and a hub of world trade.

The administrative seat of a (rural) district does not necessarily have to be located in a city, the seat can also be in a municipality without city rights. In this case, the name is not district town , but district capital . Several years ago there were district administrations in Kreishauptorten, especially in Bavaria and Lower Saxony, for example Wegscheid and Mallersdorf and, until 1952, Roding in Bavaria or Westerstede and Wittlage in Lower Saxony. The smallest district main town was the municipality Ort until it was incorporated into the city of Freyung on April 1, 1954 as the seat of the Wolfstein district . With the dissolution of districts as part of district area reforms (e.g. dissolution of the districts of Wittlage , Mallersdorf and Wegscheid in 1972) and the granting of city rights, e.g. B. to Westerstede on May 28, 1977, these special cases have largely been eliminated. The only exception in Germany is the Garmisch-Partenkirchen market .

In Austria, the term does not play a role under administrative law, but it does play a role in official statistics . This is how the term community capital is defined in the official directory of Statistics Austria :

“The main town is to be seen as that locality which, as a result of its enrichment with shops, commercial and service companies, ecclesiastical, cultural and administrative institutions, functions as the center of the community. This is not always the largest place or where the ward office or church is located. For formal reasons, each municipality has a main town, although there are some municipalities that have no main town. "

The locality itself is an administrative area, to which usually an eponymous capital (originally the seat of the local post office as the address area) belongs.

In addition, the spatial planning of the federal states works on a larger scale with this term, mostly with the gradations regional center, subregional center (limited central location function, e.g. only economic, but not political), partly subregional supply centers (often together with other places) and local center. The municipal capital follows as one of the lowest levels, then there are also inner-municipal secondary centers (main locations of the localities , etc.).

In German-speaking Switzerland , a village can also be the capital, as not all cantons have cities. The capital of the canton of Appenzell Innerrhoden is the village of Appenzell with 5751 inhabitants (2006). In the case of cantons whose administrative center is a city, the main town is also colloquially the capital, such as Zurich . This also applies to the Liechtenstein capital Vaduz with a little more than 5000 inhabitants.

In Switzerland, all places with more than 10,000 inhabitants are statistically considered to be cities. Many historical cities (towns with medieval town rights ) have significantly fewer inhabitants. The historical cities include, for example, Stein am Rhein , Diessenhofen and Maienfeld or, as extreme, Fürstenau with fewer than 1000 and Werdenberg with fewer than 100 inhabitants. On the other hand, Schwyz , the capital of the central Swiss canton of Schwyz , is still proud of being a town and not a town despite its 14,000 inhabitants .

In France , chef-lieu , the French equivalent of “main town”, is used for the administrative headquarters of all types of regional authorities and administrative units as well as constituencies ( cantons ) below the central state ( regions , departments , arrondissements and municipalities ).

In some cases, the number of inhabitants hardly plays a role: The canton of Craonne z. B. was named after its main town, a village with only 65 inhabitants (2005), until its dissolution in 2015, while the largest town in the canton ( Corbeny ) has ten times as many inhabitants (693 in 2006); however, Craonne had 630 inhabitants in 1906.

In Italy , the corresponding Italian term capoluogo is used in the same way for the administrative offices of the regions , provinces and municipalities.

In Sweden , each of the 290 municipalities has a capital ( Swedish centralort ), which often has the same name as the municipality.