In Germany, locality denotes both the organizational and legal status of a settlement .

In Austria , the locality is the basic unit of the settlement structure system.

In Switzerland , a locality is understood to be a delimited settlement area within the Postleit structure.

In communities that have been enlarged through the incorporation of neighboring communities, official localities have often been and are set up - mostly in the delimitation of the former communities. In this case, it is a legal term that results from the respective municipal constitution or municipal code of the state. In particular, the formation of localities in the municipalities belonging to the district in Baden-Württemberg , Lower Saxony , North Rhine-Westphalia , Saxony , Saxony-Anhalt and Thuringia is planned. Localities can consist of one or more villages or districts. The most by the main statute established a community villages have their own village representative, the Ortsrat (or Ortschaftsrat ), who is elected directly by most of the population in each municipal election. The chairman is the mayor or mayor . The local councils are to be heard on important matters affecting the locality, but they are usually not responsible for making a final decision. With the establishment of local councils one wants to alleviate the loss of independence of a community when it is integrated into a neighboring community.

In (larger) cities, the city ​​district is comparable to a locality , which usually also has its own representative body and can in turn be divided into districts and localities .

"A village is understood to be a set of houses that were originally held together by a common conscription numbering."

In many cases, the origin of the localities as a numbering section is hardly recognizable any more, since the original conscription numbers have long been replaced by other numbering systems and street names , often street by street . Sometimes named streets, along which the houses are numbered today, even extend through several villages. In the middle of the 19th century, the political communities were created, and according to the municipal ordinances issued by the federal states, at least one municipal council resolution is required to amend the population of localities. Therefore, localities often remain even if they no longer have their own house numbering. Thus, the localization made by municipalities today is sometimes based solely on tradition or on other characteristics applied differently from municipality to municipality, for example on spatial separation or on the subdivision according to formerly independent political municipalities that was retained in the management of separate localities.

The assignment of orientation numbers (such as conscription number, house number) and the allocation of each inhabitable building to a locality is the task of the political communities. The resulting system of the central official settlement structure according to localities is integrated into the system of the Austrian administrative structure in such a way that it represents a subdivision of the municipalities.

"A municipality can consist of several localities or is identical to one locality."

The locality in this statistical and administrative sense is therefore a subdivision of the populated area within the political municipality boundaries, with each municipality comprising at least one locality. If an original conscription location from the 18th century was cut up by the borders of political communities created from the middle of the 19th century, which happened particularly in Upper Austria and Carinthia, since then several localities have been kept for this place, separated by municipalities, mostly with the same name ( but with its own local code ), possibly with different exact spelling depending on the municipality. Although such localities were and are counted separately, they were provided with the note "locality share " in the local registers published by the Austrian Central Statistical Office until 1971 .

The term locality as a statistical and administrative unit says nothing about the structure of the settlement; in particular, it does not assume a closed settlement. It is not uncommon for a village to include both a closed settlement and the surrounding scattered settlement area. No uniform objective standards were applied to the establishment of localities. The degree of subdivision into localities varies both according to the national or municipal formulations as well as according to the landscape structure of the settlement: In some areas every smallest closed settlement is an independent village; A village can only consist of a single house and has no residents; sometimes even after the last house of a village has been abandoned, the locality still exists legally for the time being. In other areas, localities comprise large areas and numerous small settlements with their own settlement names .

From the definition of the locality as a set of houses it follows that localities only have clear boundaries in the immediate populated area. On the other hand, it is not possible to separate the village into fields, forests and wastelands. The term locality does not coincide with the term local area used in the road traffic regulations .

Previously, near the junction of the most important streets in a town, legible town signs had to be placed on the street, on which the name of the town, the municipality, the judicial district and the political district had to be given. Such town signs were in use from the early 19th century to the second half of the 20th century. They are not to be confused with the traffic sign place-name sign .

Linking rights to the status as a locality

In Tyrol - and only there - the establishment of a local committee and the appointment of a local chief is only possible for (remote) settlements that have the status of a locality. In the other federal states, municipalities are not bound to conform to the designated localities when setting up local parts in the sense of subdivisions under local law ( local parts , local administrative parts ).

In rural areas , the place names still form the address range in the vast majority of cases , so that there the place also represents the smallest postal unit.

The town in the official statistics

The localities in the official statistics of Statistics Austria (STAT) are used as the ordering principle, which assigns a locality code to each locality.

Occasionally, the statistical breakdown by locality does not match the localities determined by the individual municipalities. The law on the census in Austria-Hungary of 1869 stipulated that districts and suburbs, if they had their own settlement name , could be identified as separate localities in the course of the census regardless of their existence as a conscription site, which then not only in connection with Cities, but in individual cases even with parts of the market. Conversely, the Central Statistical Office for Linz , for example , combined several conscription locations managed by the municipality into one location in the statistical sense over many decades. Vienna, on the other hand, was listed as a locality for a long time by the Central Statistical Office; In the meantime, Statistics Austria - unlike the municipality of Vienna - has 23 localities for Vienna, corresponding to the 23 municipal districts .

Territorially delimited group or individual settlements, which have topographically fixed names, but only represent parts of localities, were identified in the publications of the census results as localities ( OB ; plural OBB ) with the number of inhabitants and houses and with a topographical number until the 1990s Provide settlement identification . Since 2001, data has only been given for the entire town in the local directory ; the names of the former parts of the village are listed together with other settlement names (mainly house names) as settlement names following the data on the village

The most populous places were accordingly

Disadvantages of the settlement structure according to localities; Creation of other statistical breakdowns

Both localities and municipalities in Austria comprise an extreme range of inhabitants (localities: 0 to> 100,000 inhabitants; municipalities <100 to> 1 million inhabitants), so that meaningful statistical comparisons are difficult to make. The size of localities is also constantly changing as a result of population movements, whereas municipalities often keep the number of localities stable for as long as possible. In particular, due to the urban sprawl since the second half of the 20th century, the official subdivision of localities in some places only depicts historical terms of now merged residential areas. In addition, the actual size of settlement is not reflected in the statistical data on localities if localities are broken down into individual localities by taking into account political municipal boundaries. For these reasons, more modern statistical units were created that are independent of the settlement structure according to locality:

Different use of the term locality

A locality as a geographical term means settlement , a "coherent complex of settlements", "the entirety of the residential areas gravitating towards a common center." A locality in this sense can extend across municipal boundaries and in such a case is not separated into in the official maps Providing communities with names. Therefore, the Austrian CSB sided in the gazetteers and 1971 which lie in different political communities statistical places, the parts of such geographical localities represent, in each case with the suffix " Ortschafts portion", although they are counted as separate places.

See also : List of places in Austria that are in several municipalities

In some laws the term locality was and is used in the sense of the closed locality . For example, not every statistical-administrative location is also a location within the meaning of the Pharmacy Act (ApG). 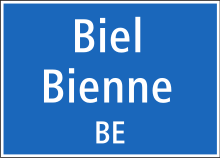 There is also a somewhat more extensive inventory of traditionally more important localities, which are also referred to as localities .

The most important official source is the list of localities in Switzerland according to the Ordinance on Geographical Names  (GeoNV). It was derived from the two locality registers of the Federal Office for Topography (swisstopo), which recorded the perimeter (delimitation) of the localities (approx. 4,100 localities), and the Federal Statistical Office (BfS), which primarily represented the names (2006 approx. 6,000 localities), and is now managed centrally by swisstopo .