This article deals with the hamlet type of settlement. For further meanings, see Weiler (disambiguation) . 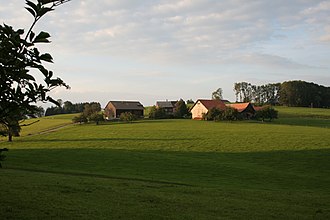 A hamlet is a housing estate that consists of a few buildings. A hamlet is smaller than a village , but more compact than a group and larger than a single settlement .

Weiler is the name of a settlement consisting of a few buildings. The word is present in Middle High German in the form wīler and is the Germanized form of the Middle Latin word villare ("homestead"), which goes back to the adjective villaris ("belonging to the estate, country estate-"), which in turn comes from the noun villa ("country house of a noble, estate, manor ") is derived. The name hamlet for small settlements goes back to the fact that the accommodation for the staff built next to the noble country houses were also included in the villa and the word ultimately named the entire building ensemble.

The forms -weiler and -wil, which are common in the south and west of the German-speaking area, as basic words for place names, are already present in Old High German as wīlāri and wīlar and also go back to the Latin villaris and villa . This designation arose from the fact that Roman country estates ( villae ) were still referred to by the later Germanic owners with the Latin word and the word was thus Germanized in post-Roman or Old High German times (approx. 750-1050).

The hamlet as a form of settlement 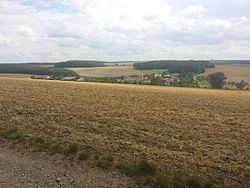 Overlooking the hamlet Hof Steinbach in Baden-Württemberg, in the Middle Ages as a clearing settlement was

In contrast to a village, a hamlet usually has no closed development and no building with a central function such as a church or an inn. This type of settlement can be found particularly in western and southern Germany, in Switzerland and in Austria.

However, if - with the same type of settlement - the church forms the center of the settlement, one speaks of a church hamlet , in the case of a castle of a castle hamlet .

In human geographic map interpretation, up to 15 recognizable buildings are referred to as a hamlet. If aerial photographs are interpreted, stables, sheds and annexes should be disregarded when counting.

In Austria, differentiating from Weiler (three to nine buildings in close proximity) and Rotte (buildings in a loose arrangement regardless of the number), there is the topographical designation Scattered Houses : “Buildings that are scattered over a large area, regardless of the number ". Closed places with more than nine buildings are here as a village . In the case of only one or two buildings without settlement context, i.e. in the case of individual settlements, one speaks of solitude , single courtyard , single house , single layer , where the term single layer , in Bavarian as well as Austrian, means desolation, loneliness .

As a rule, there are no street names in hamlets because of their small size. In these cases, the place name - then as a district - or the house name takes the place of the street name. The house numbers should still correspond to the spatial arrangement of the building, but can also run without any recognizable order. Sometimes there is also a common house numbering for several such smaller places, possibly also over the whole municipality area or larger parts of it. It can also be the case that the streets in a municipality are named, but the house numbering in such smaller places is based on this street name.

Regulation of the StVO

As far as settlements do not represent closed localities within the meaning of the Road Traffic Regulations (StVO), such places cannot be marked with a place-name sign on German roads and therefore have no speed limit. In order to still specify the place name, one can place information board can be used. The illustration of the single-line version in the catalog of traffic signs of the StVO is labeled with Weiler and the sign is usually and unofficially referred to as a hamlet sign .

In Austria, the term Weiler (short: W) is a topographical settlement designation by Statistics Austria for “3 to 9 buildings in closer proximity”, typically with a structure that has evolved over time. Larger collections are then a group  (R) or already a village  (D).

In the states of New York and Oregon , the name Hamlet exists for small settlements that do not form a community of their own . Hamlets can either be part of a larger community (New York), or they can be administered directly by the respective county (Oregon).