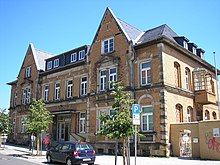 The postal system is the totality of the commercial transport writing and distributing messages addressed economic agents .

The change post ( Latin mutatio posita ) was the fixed place where the horse change took place in the horse mail . The first Roman emperor Augustus was probably the first to set up these post stations, which were a day's journey away from each other on fixed routes ( Latin cursus publicus ). It was not until 1521 that the word post appeared in Germany.

The post office becomes necessary if the sender and recipient are not present in the same place at the same time, but a written message is to be exchanged between the two. The post is thus a means of communication . It represents an asynchronous telecommunication in which the messages are recorded or written down before they are transported to the recipient with a time delay and only then (perhaps) received by him ( letter , postcard , parcel ). First, these messages must be collected by the postal company and then sorted before they can be forwarded to the recipients.

The traditional postal companies transport messages and small goods , mail and sometimes also people (for example in Austria , Switzerland and Germany with postal buses ). In Europe they were mostly state-run, but in the meantime the state-owned logistics companies have often been privatized or are on the way there, e.g. B. in Germany. Often money transactions and document transactions (e.g. proof of identity ) are also carried out. Also, fax , e-mail and other services are often offered by the post office.

Message in a bottle , on the other hand, is not a delivery by definition because the recipient is unknown.

The term post is also used for all types of transport. So a distinction can be made between

In the age of electronic data processing , the term was transferred to electronic mail ( e-mail , in English mail 'post').

The word post was also used for newspapers of the 17th century , as the example of the Leipziger Post- und Ordinar-Zeitung shows. This is still the case today: for example Washington Post , Rheinische Post .