This article deals with the content of information. For news in journalism, see news (journalism) .

Traditional form of communication: the messenger.

In everyday language, a message describes the content of information . The notification of a message is the notification. In information theory , a message is information that can be described quantitatively as a signal and qualitatively as a meaningful sign or sequence of characters. In the process of communication, it is transmitted from a sender to a recipient according to a code . It is newsworthy for the recipient and evokes an interpretive response in addition to the stimulation .

Messages are the basic element of communication and thus subject of consideration by various sciences , including the semiotics , information theory, the Communications , the communications technology and behavioral research . 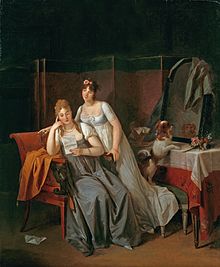 According to the German dictionary , the message is a "message to Darnachrichten". Message has stood for a message since around 1600. In the sixteenth to eighteenth centuries, news is evidence of instructions for something to be followed, which is gradually being suppressed. Since the 20th century, news (broadcast via radio, television) has been used to denote current, particularly political reports in the plural . The latest definition of news comes from Dietz Schwiesau and Josef Ohler: "The news is a direct, essential and as objective message as possible about a new event that is important and / or interesting for the public."

In semiotics , signs develop their meaning on the semantic level .

News is often synonymous with news and information about events . In common parlance, the plural news stands for reports on current events in the mass media , such as television , radio or newspapers and magazines . There is a distinction between "good news", such as the rescue or recovery of people and "bad news" as reports of disasters , deaths or accidents .

In Christian religions , “Good News” or “Good News” is synonymous with the gospel accounts of the Bible about the life and work of Jesus of Nazareth .