A signal ( Latin signalis 'intended', signum 'a sign') is a sign with a certain meaning that the signal receives by appointment or regulation. An information can be transported by a signal. To do this, you need a transmitter and a receiver (see the radio signal in communications engineering ). Direct human communication does not require technical aids , where (often non-verbal) signals can mean different requests. 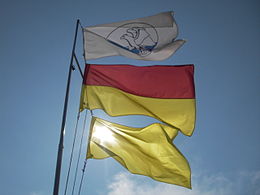 A signal generally contains a meaning and can be used to transmit a message . It is only useful if the recipient recognizes a defined meaning in it, has a suitable sensor and can evaluate the information content accordingly. A device or object for signal generation is a signal device (signaling means).

The distinction between technical and non-technical signals cannot be established completely clearly in every case. A non-technical signal from the field of transport is a police officer who controls traffic with a hand signal. And a technical signal from the field of communication is the signal in the telephone line. The light signal and sound signal can be clearly distinguished from one another according to the various sources. A well-known source of a light signal is the lighting for emergency exits ( pictogram ).

In general, a signal is a real, time-variable quantity whose essence is information. In the technical-physical context, it is an effect that emanates from a physical object and can be described mathematically as a function (for example an electrical voltage curve over time).

One subject that deals particularly with the term signal is communications engineering , an area of electrical engineering . We speak of a signal if we have a measurable physical quantity such as B. an electrical voltage , a sound pressure or a field strength assigns information. This information can come from the measurement of a physical process, such as the measurement of a temperature. The information can also be impressed on a signal by a technical modulation method in order to transmit any information to a suitable receiving device by a signal. In general, signals change their magnitude as a function of time and another information-carrying variable. Furthermore, signals in a general representation are dimensionless, i.e. they have no specific unit of measurement . The assignment of the information to a signal is initially arbitrary, so that the information can generally only be meaningfully evaluated if the properties of the source of the signal are known.

Signals that do not have a continuous time course are called time-discrete . If time runs continuously in physical systems, only the state variables (values ​​of the signal at certain points in time) observed by a measuring system are time-discrete. If the measurable quantity can only have a finite number of values, in extreme cases only two such as {on, off}, {light, dark} or {0, 1}, one speaks of a value discrete or n-nary (in the case of two values ​​binary ) Signal. A signal that is discrete in time and discrete in value at the same time is referred to as a digital signal . In contrast to this, an analog signal is a signal whose information- carrying variable can assume continuously changing values.

Examples of signals in communications technology are the time signal or in television and video technology the television signal .

A signal is also used to describe electrical AC voltages that originate from signal generators . They show a characteristic time course and can be used not only for modulation but also for control, test and measurement purposes.

The model of a signal is the real function that assigns a real value to each point on the real axis as a time line. If one also wants to include spatial aspects or variations in further parameters in the signal concept, as is done in digital image processing , then the signal is modeled as a function with the linear space ℝ d or a subset of it as the domain of definition . The case d  = 1 is associated with time-dependent signals, the case d  = 2 with position-dependent signals.

The target set does not have to be restricted to one dimension either. If we trace the development of several variables simultaneously, forming N -tuples of the measured values a point in a linear space ℝ N .

If the domain is discrete , i.e. if it consists of isolated points, then the signal is also called discrete . For signal theory, finite sets and regular lattices in ℝ d are relevant , such as B. the set ℤ d or scaled variants thereof. (Every regular grid in ℝ d is given by a reference point O, usually the zero point, and a basis , usually a scaled instance of the canonical basis.)

If, in addition to the discrete domain of definition, the range of values ​​is a finite set, e.g. B. a finite subset of ℝ N , so the signal is called digital , because the finitely many elements can be enumerated by bit sequences from {0,1} M for a sufficiently large M. An elementary digital signal is a function on a grid that maps into the set {0,1} or the set of truth values ​​{true, false} or the states {on, off}. About tuples, i.e. H. Bit sequences of elementary digital signals can be encoded in any form of digital data .

A form signal for entering the Fridingen train station

In the transport sector , the signal is a sign set up for the road user on the route that defines rules for using the traffic route, e.g. B. makes statements about the passability and maximum speed of a certain route section. A distinction is made between the following signals:

For the transmission of (electric) audio signal in terms of the sound equipment has speakers found worldwide distribution. Several tone signals can be perceived as a chord (different signals simultaneously) or as a melody (sequence of signals). Sources for audio signals are: microphone with amplifier , musical instrument , audio playback devices (e.g. CD player , record player , etc.), synthesizer (e.g. sound card ).

Example: If the frequency of an acoustic oscillation is to be measured, the measurement signal will be an electrical alternating voltage .

Known to be at airports Marshaller (Einwinker) used aircraft to its designated parking position ( English parking spots ) to steer. Verbal communication between the marshaler and the pilot, however, is usually not possible. Therefore, communication with the pilots must be carried out using standardized signaling signs ( glow sticks ).

In the early 19th century, optical telegraphing was used . H. the information was transmitted through the placement of telegraph arms.

Signal vests are worn in various professional areas in order to make pedestrians clearly visible in special situations: at the airport or port , in construction sites or in the event of a breakdown in the vehicle.

Signals for perception by living beings

Signals for human perception are such that one of the human senses can perceive them, for example as a signal color or ring tone . They can have a specific purpose, e.g. B. as a warning signal or contain information such. B. via the "free ride" at a green traffic light .

In this sense, the traffic signs in Switzerland are called road signals.

Signals for human perception can be generated electronically , chemically or by body language . z. B. with a gesture .

Signals are also common when dealing with humans and animals (see dressage ), for example with dogs or horses . The steps of signal recognition, signal evaluation and an appropriately trained reaction must be practiced beforehand.

A political signal is an action whose role model and other effects or whose culturally implied meanings are expected to influence the actors of a political system .

In living beings, signals are mainly transmitted through messenger substances and electrical charges ( nerve cells ). The phenomenon of mimicry is based on "signal forgery" .