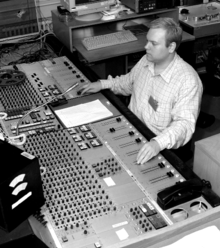 Sound engineer in a recording studio

Sound engineering or electroacoustics is the generic term for technical devices that are used to convert, edit, record (store) and reproduce acoustic events ( sound ).

Sound itself and the information and acoustic processes it contains cannot be edited or saved without technical tools. With mechanical devices, sound can only be reduced by means of sound insulation or soundproofing , as well as being deflected by means of diffusion . Electronics are used to process or even save sound information in more extensive form :

Usually, the sound is first converted with a sound transducer , e.g. B. with a microphone that serves as a sensor and converts sound waves into electrical signals. The resulting electrical sound signals, which represent the air pressure fluctuations of the sound, can be processed and / or recorded or stored and duplicated with other sound engineering devices in any number of steps . These are then output as sound waves through loudspeakers .

The digital or analog mixer is used, among other things, for signal adjustment, mixing, acoustic control and mastering , and for converting into a target format such as stereo or 5.1-channel surround sound . In addition to controls for level adjustment (faders), it also contains tone controls and direction mixers (panorama controls). Additional devices such as dynamic processors can be integrated via transmission and reception paths.

Special measuring instruments such as level meters or correlation meters and stereo viewing devices are used for the technical control of the audio signal .

For decades, magnetic tapes were used to store the recordings (see also the history of video and audio systems ). With tape recorders and cassette recorders , sound was recorded in an analog manner. Analogue tapes and compact cassettes were later largely replaced by digital storage on magnetic tapes ( U-matic , DAT , DCC ), magneto-optical digital storage ( Magneto Optical Disk ), hard drives and memory cards . Due to the digital storage, the respective storage medium lost its influence on the recording quality.

Some functions of the recording studio technology can now also be realized on a standard PC. This is the most widely used tool for sound engineering today, as the so-called Digital Audio Workstations (DAWs) offer recording, playback and flexible editing options with the help of software plug-ins . Such virtual studios can realize many of the individual devices mentioned above, possibly also in combination with sound generation. DAWs can work but of course only with digitized audio signals, so you need to PC with DAW software always another A / D - and D / A converter in the form of a built-in sound card or external, often over USB or FireWire tailed audio Interface as well as microphones or other primary sound sources.