The volume is a slang term for the strength of the sound at a specific location. Physically it can be measured as sound pressure or as sound pressure level . The volume is perceived by people as loudness . The psychoacoustics is concerned with the relationship between human emotion and the physical quantities of the volume.

Sizes to describe the volume

Physical quantities to describe the volume are

The sound perception of humans is taken into account for the following quantities:

See also the corresponding → main article that is linked to. 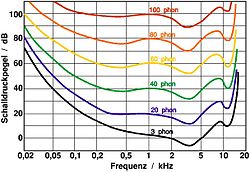 Relationship between Sone and Phon

Loudness does not say anything about how “pleasant” and / or “uncomfortable” a sound event is perceived by a person individually. Additional psychoacoustic parameters such as sharpness and roughness etc. are necessary for this.

In music , volume is one of the musical parameters of a single note; a more precise term would be "psychoacoustic tone strength ".

Different types of level meters are used in the field of sound technology. Fast-reacting peak meters (QPPM, Quasi Peak Program Meter) with a defined integration time in accordance with DIN 45406 (IEC 268-10, ARD Pf 3/6) are usually used as level meters in production . They represent a compromise between a quick response (≈ 10 ms) to protect the electrical system and an approximately hearing-related level measurement. To control the loudness, loudness meters standardized according to ITU BS.1770 with LKFS display (loudness, K-weighted, based on Digital full-scale). Occasionally there are also VU meters (VU, Volume Units) with an integration time of around 300 ms (according to ANSI C 16.5 or IEC 268-17).

Sound level meters with A or C weighting are used for sound level measurement in the field of sound engineering, for example for measuring studio monitors or for monitoring public address systems ; see evaluation curves .

This article or section needs to be revised: The Sone data are only very roughly correct, as they were calculated here in the table from the unweighted sound pressure level, but in reality they refer to the volume level in Phon, which is numerically around 10-20 dB or phon can deviate from the unweighted sound pressure level.
Please help to improve it , and then remove this flag.