Under the rms value is used in the electrical engineering of the root mean square value of a time-varying physical quantity understood. The term is preferably applied to alternating quantities, generally to quantities in stationary processes.

The rms value depends on both the peak value and the shape of the curve. In the English language, the effective value is called RMS (abbreviation for R oot M ean S quare , quadratic mean). 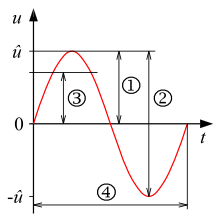 Since many devices that are operated on the network contain non-linear elements such as diodes or electronic components such as switched-mode power supplies , their current consumption is not sinusoidal even with an ideal, sinusoidal input voltage. The electricity contains components that distort the course but do not contribute anything to the energy transfer. These proportions increase the effective value of the current. Since the effective value is decisive for the current heat losses in the conductor, the current in the form of its maximum effective value must be taken into account when dimensioning conductor cross-sections. The simple relationship between amplitude and rms value known from purely sinusoidal quantities no longer applies in such cases.

Representation of the definition

The effective value of a variable that changes over time is defined as the constant value that transfers the same power (heat per time period) to an ohmic resistor on average over time.

In the case of the notation with real-valued quantities, the power is equivalent to the instantaneous values ​​of the power

AC voltage , current strength and power as sinusoidal quantities on an ohmic resistor

Where and are the instantaneous values ​​of voltage and current. In the case of periodic processes, the size is the period duration or, in the case of statistical processes, a sufficiently long time (mathematically strict for ). The starting time is not included in the result for periodic processes; it can be chosen for the calculation as appropriate and is often set to zero.

A power is associated with a direct voltage and the associated direct current . Then result with Ohm's law as well

After equating , reducing the constants and extracting the root, the effective value is obtained in the form of an equation

The last notation clarifies the rule of thumb that is contained in the English term "root mean square": root of the mean value of the square.

Corresponding equations apply for the effective value of the current strength and in general for every other variable, but stationary quantity.

If the course of the signal cannot be specified as a function, an approximation method with sampled instantaneous values ​​can be used to calculate the effective value. With values recorded in the period so that is obtained

where are samples or instantaneous values read at the intervals during a period .

At constant intervals this simplifies to and

In the case of a linear consumer , the voltage results in a current that has the same time profile in terms of shape and frequency and with ohmic consumers no phase shift over time .

According to the addition theorems ,

Applied to the square of a sinusoidal voltage with

determine. Thus, the root mean square results from its root:

from which the mean value after the onset of the limits

follows. Inserted into the defining equation yields that

The opposite is true for sinusoidal shapes

With mains voltage with an effective value of 230 V, the amplitude is 325 V.

Periodically switched on / off size

If the current consumption from a voltage source is to be throttled, a tried and tested method for this is pulse duration modulation , since the switches have almost no losses and the control can be digital. If during a fixed period of time the voltage only for a part of the period is switched on, the average current is reduced relative to the current flowing in the switch-on current proportional to the duty cycle on

The effective value is given by

The fact that it is leads to the fact that both cables due to the copper resistance and voltage sources due to their internal resistance heat up more than with the same average power consumption with continuous current. See also ripple current . To measure this pulsed current, it should be noted that it is a mixed quantity; see further below.

For triangular and square wave signals, see the table under form factor .

Digital handheld multimeters, which actually determine the rms value according to its definition, are marked to differentiate that they measure the "true" rms value (label e.g. English true RMS ).

Digital processes are often used for medium frequencies (up to a few 100 MHz). The signal is sampled at a frequency that is as high as possible in order to capture the curve shape as well as possible. The effective value is then calculated using the square root of the mean value of the squares (RMS) of the individual measurements as described above. Most digital oscilloscopes can also display the RMS value of the recorded signal curve directly. You calculate it this way too.

Moving iron measuring mechanisms show the effective value due to their principle. This makes use of the fact that the force of attraction on a magnetically soft iron part in a coil depends on the square of the coil current. This iron part moves the pointer, both together form an inert mass, which creates the mean value. Often the instruments also have air damping. Depending on the design of the coil, they can be used to measure voltage or current. In both cases, they have a lower resistance than corresponding electronic measuring instruments, which is a great advantage when measuring current, but is often disadvantageous when measuring voltage. Moving iron instruments (especially voltmeters) are only suitable for a limited low frequency range, often for example only for 50 Hz mains frequency.

The measurement by means of a thermal transducer is closest to the definition. The current to be measured flows through a resistor, which in principle heats up proportionally to the square of the rms value of the current or voltage ( current heat ) and the increase in temperature is measured. This measuring arrangement can be calibrated by setting a direct current that causes the same temperature change. This thermal measurement method can be used to correctly measure frequencies of up to a few gigahertz. Hot wire instruments therefore also show the rms value.

In measuring devices for lower frequencies (up to about 1 MHz), integrated RMS converters are usually used, which achieve error limits of less than 0.2%. You work with analog electronics (see also analog computer ).

There are several electronic circuits for rms formation. One of them has proven particularly successful and is offered as an integrated circuit by several manufacturers . The input signal or may contain DC and AC components. The output current is proportional to the rms value of the input signal, with the necessary equivalent value resulting from the low-pass filter formed by and . The circuit works as follows (see picture):

In the input stage a current is generated with  . The combined squarer and divider produces a  . This intermediate result is smoothed and controls two current sources by means of current mirroring . One feeds the signal back to the dividing input; the other provides the output signal  . This results in the following calculation:

The rms value of the mixed voltage results from

If the direct component is to be measured alone, an effective value measuring device is not required at all - the multimeter can be used in the direct voltage range as long as it creates the mean value, which is often not the case at low frequencies.

The same applies to the mixed current and to current measuring devices that generate effective values .

Textbooks on measurement technology or electrical engineering, for example