A voltage measuring device (also known as strain gauges or colloquially as voltmeter hereinafter) is used for the measurement of electrical voltages .

There are displayless measuring devices for industrial applications .

Circuit symbol of a voltmeter. The letter V inside the circle is based on the unit of voltage volts. 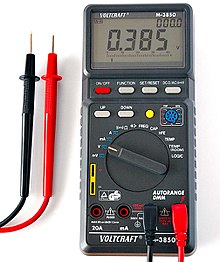 With today's digital voltage measuring devices, the voltage is displayed directly in numeric form . The analog voltage to be measured is tapped at high resistance (parallel connection) and converted into a digital signal by means of an analog-digital converter , which controls the numerical display.

The disadvantage of numerically indicating measuring devices is that chronological progressions cannot be followed so well. For this reason, some digital voltage measuring devices also offer a scale display in the form of a bar graph or a graphically displayed pointer in the display field (weakly recognizable in the image of the multimeter below the number field). The resolution of the numerical display is limited to 1 digit ; see digital measurement technology and digital multimeters .

Ammeter and voltmeter on a power supply unit

With an electrostatic voltmeter , the voltage leads to a pointer deflection without current flow . The mechanical force arises from the repulsion of the same name or the attraction of unlike charges. The simplest electrostatic voltmeter is the electroscope and was mainly used to measure higher DC voltages. More precise measuring devices had three electrodes, one of which was a movably mounted sheet metal between the other two electrodes. The voltage was connected to both fixed electrodes and one pole to the movable one. The devices often have a light pointer (display principle of the mirror galvanometer , which is not, however, an electrostatic measuring device). They are also suitable for AC voltage .

In industrial metrology and automation technology, no indicating measuring devices are used, but measuring transducers that deliver a standardized electrical signal for central processing. In terms of analog technology, this can be a standard signal, for example as 4… 20 mA. It can also be a digital output signal for transmission via a data bus , which is called a fieldbus in this context . These measuring devices with a digital measuring signal at the output are also called measuring converters .

Voltage converters (special measuring transformers) are used as measuring transducers for measuring range adjustment and for potential separation at high AC voltages . The nominal value of the output voltage is preferably 100 V.

Voltage compensators are suitable for precision measurements and for measurements without any current load on the measuring object (at least when calibrating) . However, they are being replaced by electronic devices with comparable qualifications.

The voltmeter is connected to the two points of a circuit between which the voltage is to be measured. If you want to measure the voltage that drops across a component or measurement object, the voltmeter is connected in parallel. This can be done for short tests with test probes without having to intervene in the circuit. Therefore voltage measurement is the most common form of electrical control. Current measured values can often be obtained indirectly from a voltage measurement if the value of the resistance R is known, over which the measurement is being made (current I = U / R with U = measured voltage).

This overload problem does not exist in this form with digital voltage measuring devices, as their internal resistance is very high and therefore only converts little power. If the end value of the measuring range is exceeded , depending on the version, a multi-stage voltage divider automatically switches to the next higher measuring range.

For reasons of safety, the maximum permissible voltage is usually in the range 700 V to 1000 V and is partly printed on the measuring device and partly specified in the instructions for use.

Voltage measurement in a circuit
Replacement voltage source for this

Target in the displayed image in the upper circuit, the at R 1 falling voltage U 1 can be measured, it is noted that the source of this voltage a source resistance R q = R 1 || R 2 has. (Note: The source of U 0 , as an ideal voltage source, has zero source resistance.) The circuit below is electrically equivalent to the one above. If the measuring device is connected to it, a smaller measured value U m is obtained instead of U 1 because R q and R U form a voltage divider . The resulting feedback deviation , given as the relative measurement deviation f , is

example
With R q = 5 kΩ and R U = 50 kΩ: the current consumption of the voltmeter inside the voltage source at R q causes a partial voltage to drop in the ratio of the resistances 5 kΩ / (5 kΩ + 50 kΩ) = 9%; the measured value is determined with a relative measurement deviation of - 9%.

With digital voltage measuring devices it is not usual to extend the range with a series resistor; the internal resistance of these measuring devices is typically 1 to 20 MΩ in all ranges; The standard is 10 MΩ. Rather, voltage dividers are used here ; this is built in internally in multimeters. Due to the high internal resistance, the problem of feedback deviation (circuit influence error) does not occur to the same extent as with moving-coil voltmeters.

The disadvantage of such a high internal resistance is that the voltage display is not clear when measuring on disconnected circuit parts; it is then influenced by fields in the environment, which reload the circuit part (for example, a switched off or interrupted line or just the measuring line that is not connected) by means of influence or induction.