In electrical engineering, a digital multimeter ( DMM ) is a measuring device with a numeric display that is used to measure various electrical parameters . The three measurands electrical current , electrical voltage and ohmic resistance can be determined with almost all digital multimeters. Other measured variables are in part the electrical capacitance or the inductance of a component. Many multimeters also offer a function for testing transistors or diodes. With the help of an external sensor, some devices can measure the temperature .

It works with an electronic analog-to-digital converter (ADC) and shows the measured value in decimal numbers on an LED or liquid crystal display . A DMM requires electrical energy to function. This is usually provided by batteries or rechargeable batteries . But there are also digital multimeters that are powered by solar energy or via a power supply unit from the mains .

A digital multimeter for resistance measurement in the 20 kΩ measuring range with a resolution of 0.01 kΩ

Display field of a DMM:
numerical display combined with a scale display

Some devices allow data to be transferred to a computer using a serial interface . In order to obtain the advantages of a display with a scale display, some DMMs are also equipped with a bar graph.

Digital multimeters are part of the basic equipment of an electronics workshop. They are also used in electrical installations .

A digital multimeter can measure various electrical quantities. Voltage, amperage (both constant and alternating ) and resistance are common. The switching of the measured variables and ranges is usually done mechanically. High-quality DMMs choose the voltage measuring range themselves, can protect themselves against overload and overvoltages and measure alternating quantities as effective values .

ADU according to the dual slope method

The heart of a DMM is the ADU. Most DMMs work with a converter according to the dual slope method . With this integrating method, the equivalence of the voltage signal is measured by comparing it with a built-in reference voltage . The duration in which the voltage to be measured is integrated or averaged over is typically between 100 and 300 ms.

Properties of the dual slope method:

Sinusoidal alternating voltage, rectified, squared; the mean values ​​for this

If alternating voltage is to be measured, a rectifier is necessary to generate the amount. DMM use a circuit as a precision rectifier for this . In this case, the non-linearity of a diode has no influence on the display, even with voltages that are lower than the diode forward voltage . The arithmetic mean value of the rectified AC voltage (the rectified value ) is measured. With an alternating voltage, however, the display of the effective value is expected. In the majority of measurement tasks, one has to do with sinusoidal alternating quantities. For this, the generated rectification value is displayed enlarged by the form factor 1.11 (= π / √8). The form factor is defined as the ratio of the rms value to the rectified value; the concrete value 1.11 only applies to a sinusoidal curve. This shows the rms value for sinusoidal voltages. If the time course is different, this display will be erroneous, it may deviate catastrophically from the effective value.

Digital multimeters, which can measure the actual effective value ( English true RMS ) of any voltage curve, are equipped with a device (integrated circuit or software in a microcontroller) that calculates the effective value analog or digital. Analog working blocks for rms value formation are available as an integrated circuit. It is now common to install them in higher quality multimeters.

For digital rms value formation - depending on the required sampling rate - fast converters are required, which for price reasons cannot (yet) gain acceptance.

As a result of incomplete smoothing in the rectification or effective value formation, reliable measured values ​​are only obtained with an integration period that covers a whole (or very large) number of periods of the alternating voltage. An integration over 100 ms (5 periods at 50 Hz or 6 periods at 60 Hz) or an integral multiple is usual for effective interference suppression at mains frequency.

Sometimes you can choose between the two options "AC" or "AC + DC". If this is not the case, you have to determine experimentally or by studying the operating instructions whether mixed voltage or its alternating component is measured.

To measure the current, the voltage is measured across a built-in measuring resistor - depending on the setting, as direct or alternating voltage. He surrenders to

Most DMM are therefore inferior to other current measurement methods that manage with a significantly lower voltage drop.

Several measuring ranges are realized with a series connection of several different measuring resistors connected in parallel to the voltmeter, whereby a step switch switches one or more of them into the circuit without interrupting the connection when switching over ( make before break ).

To measure high currents from around 10 A, instead of the voltage drop across the measuring resistor, the electromagnetic field surrounding the conductor is recorded. There are also clamp meters with measuring ranges up to around 1000 A. Advantages of the clamp meter are that you do not have to cut the conductor for measurement, and the electrical isolation .

To measure resistance, a DMM contains an electronically stabilized constant current source that supplies a direct current that is independent of the load. When the resistance to be measured is connected to the input terminals, the current is sent through the device under test and the resulting voltage is measured, preferably in the smallest voltage measuring range. The current source is then switched over to switch the measuring range .

If a measuring device shows five decimal places in its display field, it has a resolution of 0.01 mV in a measuring range of 200 mV. It can display 20,000 different values ​​from 000.00 to 199.99 mV. The leading position is not fully developed. Colloquially, the device is referred to as 4 1 ⁄ 2  digits. The same applies to a measuring range of 250 mV with 25,000 steps. How many steps a “half” digit resolves only becomes clear once you know the measuring range or the number of steps.

Measurement errors with the digital multimeter

Deviations from the proportional relationship (dashed line):
a) additive, b) multiplicative, c) non-linear 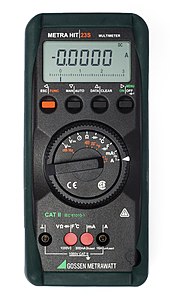 The characteristic of an ADC (with extremely fine gradations) is a straight line through the zero point and stands for the desired proportionality between the display and the measured variable. The zero point must be set by horizontal shift. The sensitivity must be set by turning (changing the slope of the characteristic curve), see also under the heading of measuring device deviation . Both are only possible within certain error limits.

Because the measured variable is only mapped step-by-step, there is a quantization deviation .

This measurement deviation is significantly smaller than the calibration deviations that typically occur. One distinguishes between

Digital multimeters are usually adjusted to one of the temperatures 20, 23 or 25 ° C in accordance with DIN 43751. When the temperature of the meter changes, the electrical properties of its components change. The measuring device deviation may become larger due to influencing effects. The influence of temperature on the measured value is indicated with the help of a parameter.

The curve shape of the measured variable can be described by various parameters. One of these quantities is the crest factor , defined as the ratio of the peak value to the rms value. The following applies to direct voltage and to sinusoidal alternating voltage . If the peak value is much larger than the rms value (i.e. it is ), as is the case with pulses , for example , incorrect measurements will occur.

The sinusoidal shape is mandatory for measuring devices that generate rectification values ​​for alternating quantities, otherwise considerable deviations can occur. In the case of effective value-forming DMMs, the curve shape is typical to have little influence if the fundamental frequency is not too high (50 to sometimes 400 Hz).

Calculation of the error limit

The measuring device is operated under the same conditions as when it was adjusted. Display ; Manufacturer's specification for the limits of intrinsic deviation: 0.2% of the value M. + 1 digit

Example (extension of the error limit through influence):

The measuring device is operated in an ambient temperature of 35 ° C. The manufacturer states the above error limit for a reference value of 23 ° C. For operation at a different temperature, a further specification by the manufacturer is a related additional deviation: (0.05% of reading + 2 digits) / 10 K