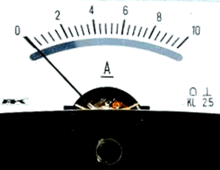 In DIN 1319 , which is fundamental for metrology , the term accuracy class is defined as a class of measuring devices that meet specified metrological requirements so that the measurement deviations of these measuring devices remain within defined limits .

Measuring devices that meet specific accuracy requirements can be assigned to an accuracy class. This class is identified by a class symbol in the form of a number. In the picture above this is 2.5. An addition, e.g. B. a circle that encloses the number can be added.

Error limits for direct-acting measuring devices with a scale display

The EN 60051 issued for this is extremely diverse, so that only the basics are explained here. Older measuring devices were manufactured according to the similar predecessor regulations DIN 43780 or VDE 0410.

In addition, this list is limited to current and voltage measuring devices in the preferred versions according to EN 60051-2.

If a measuring device is operated under reference conditions (the same conditions as during adjustment ) and within the measuring range , a measurement deviation that then occurs is called intrinsic deviation .

The intrinsic deviation must not exceed the values ​​given as an example for the class symbol 2.5 (in the sense of an error limit according to the amount)

In the case of an addition to the class symbol, e.g. B. circle, a different reference value applies.

The limit of the intrinsic deviation is = 1% · 100 mA = 1 mA. This limit is a constant over the entire measuring range.

If the measuring device is not operated under reference conditions, further deviations can arise in addition to the intrinsic deviation.

In the case of a single influencing variable that is not complied with, the influencing effect caused by it must also not be greater than the limit value specified above by means of the class symbol, but still provided with a correction factor. However, this only applies in a certain nominal range of use :

If two or more influencing variables deviate from their reference conditions up to a value within the nominal range of use, the resulting influencing effect must not be greater than the sum of the permissible individual effects.

Example: The measuring device described above is operated at 28 ° C and inclined by 4 °.

Example: The measuring device described above is operated at 28 ° C and inclined by 10 °.

No guarantee that the measurement deviation will be adhered to, since the nominal range of use is not adhered to.

Deviating reference conditions and nominal areas of use

It is permissible to deviate from the above specifications of the standard if the deviation is indicated by labeling. For example:

For the classes, not only requirements for accuracy, but also various other specifications such as

According to the VDE 0410 rules for electrical measuring devices, which was valid until August 1976 , these devices were divided into the following groups:

Accuracy classes for other measuring devices