Manometer is a redirect to this article. See also: Man (n) ometer .

A pressure measuring device (also manometer - from ancient Greek μανός manós "thin" and μέτρον métron " measure ", "scale") is a measuring device for recording and displaying the physical pressure of a medium ( liquid , gas ).

In most applications, the relative pressure is measured - i.e. in relation to the atmospheric air pressure . In contrast, absolute pressure measuring instruments (e.g. barometers ) use a vacuum as a reference pressure. Like the others, differential pressure gauges measure a pressure difference, but between any two systems.

Pressure gauges are divided into direct (based directly on the definition of the physical quantity ) and indirect (deriving the pressure from other physical effects) pressure gauges based on their measuring methods . There are other classifications in metrological practice, for example:

Pressure gauges whose display value is based directly on one of the following relationships:

In physical terms, pressure is the result of a force acting on a surface . The most direct pressure measurement method would therefore be to determine a force acting on a given surface. This is achieved with the piston manometer with its weight-loaded piston with a defined cross-sectional area. Liquid manometers, in which the pressure only depends on the height and density of the liquid column, are also regarded as direct pressure measuring devices. is the acceleration due to gravity . indicates the use of difference sizes.

With the piston manometer , also called pressure balance, the pressure is indicated by a piston that moves against a force. The force can be applied by springs (e.g. pressure cooker , as it is combined with a pressure relief valve ) or by weights (precision manometer). This principle is used on the one hand for very simple pressure gauges, on the other hand, high-precision piston pressure gauges are also used for calibrating or calibrating other pressure measuring devices . With these rotary piston manometers, the piston is set in rotation to avoid tilting measurement errors.

So-called "popouts" are a special design. With this design, only a pin is pushed out of the housing when a certain pressure is exceeded. This is used to indicate filter clogging. In this case, "Differential Pressure Indicator" or "DPI" for short is also used as a designation. 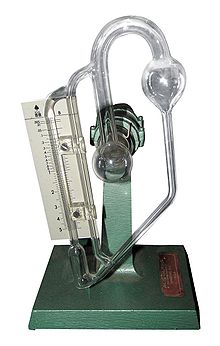 Here the pressure is displayed by moving a column of liquid. For this purpose, a U-shaped glass tube is used, which is about half filled with the sealing liquid such as mercury or water . If there is then a pressure difference between the legs of the U, the liquid column shifts to the side with the lower pressure. The level difference is the measure for the pressure difference.

The McLeod manometer is a compression liquid manometer named after its inventor Herbert McLeod . A quantity of gas is compressed with the volume to the volume . The pressure increases in the same ratio from to , which can be measured using the U-tube manometer principle. From the volumes of output pressure can then be given knowledge about the Boyle's law can be calculated.

In the case of the ring balance, a rotatably mounted hollow ring with a partition is partially filled with a barrier fluid. The chambers above the liquid are connected to the pressures to be measured, which rotate the ring until an equilibrium of forces is established with a counterweight attached below.

Mercury as a pressure gauge liquid

The reasons for the continued use of mercury in manometers to this day are on the one hand its advantageous high density. The maximum measurable pressure difference is z. B. limited by the height of the U-tube on the one hand (which is usually limited by the room or reading height) and the density of the liquid on the other hand. Here, the mercury makes it possible to measure significantly higher differential pressures than, for example, water with the same pipe length. Furthermore, it has a low capillary effect, so that the mercury in glass tubes forms a relatively flat surface that allows precise reading. Mercury is also chemically stable to most gases and allows differential pressures to be measured between other liquids with which it does not mix.

On the other hand, problems arise from the cleaning process that becomes necessary after a while. Even if mercury z. B. absorbs only very small amounts of moisture from air, it must be cleaned before the measurement result is falsified by the reduction in density. Until the 1970s, it was common in laboratories to "boil out" the mercury from manometers. Although this is simple, it is unacceptable for reasons of occupational safety because of the mercury vapors that are produced in spite of everything. Toxicity is also a problem in the event of possible environmental contamination e.g. B. if the instruments break glass or spill during filling or emptying due to excessive differential pressure.

Indirect pressure gauges use secondary physical effects for measurement purposes. Almost all areas of physics have contributed to this. Mechanical pressure gauges mostly use the elastic deformation of the measuring element. Other methods use the electrical, optical or chemical effects of pressure. Methods based on the theory of pressure as a measure of the particle number density can be named: 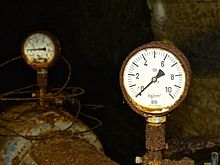 The stroke that the deflection of the diaphragm transfers to the movement depends non-linearly on the pressure. To compensate for this, a non-linear scale is used or, more commonly in practice, a groove profile is pressed into the plate spring. The design of the diaphragm spring depends on the diaphragm diameter, the diaphragm thickness and the modulus of elasticity of the material used.

Stainless steel is mostly used as the membrane material, and nickel-based alloys such as Monel or Hastelloy are also used for greater chemical resistance . Are materials required that make the manufacture of a diaphragm impossible or very expensive, z. B. plastics such as PTFE or refractory metals such as tantalum , membrane templates made of the appropriate material are used.

Functional diagram of a can barometer 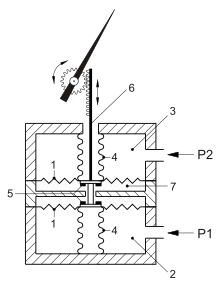 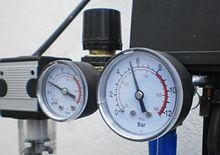 Digital manometer with a pressure cell

Capsule pressure gauges are a special type of diaphragm pressure gauges. Capsule springs consist of two plate springs arranged one above the other, which are welded together at their edges, so that a closed pressure chamber is created (“load cell”). The measuring medium is fed into the capsule via a capillary tube that is also tightly welded to the capsule. It is stored in the manometer in such a way that both sides of the capsule spring can bend and thus double the spring travel of the diaphragm can be used for measurement purposes with the same pressure. By connecting several capsule springs in series, the sensitivity can be increased. Capsule springs are used to measure low pressures. The aneroid or can barometer uses an evacuated capsule to determine the atmospheric pressure (see illustration).

In practice, pressure gauges with a spring-elastic measuring element are mostly used for measuring absolute and differential pressure. For the absolute pressure measurement, the atmospheric air pressure on the measuring spring must be replaced by a vacuum. In the case of an aneroid barometer, for example, the inside of the capsule spring is evacuated, so that the air pressure acting from the outside deforms the membranes.

Diaphragm measuring systems are mostly used for differential pressure measurement (see figure). At the same pressure in the positive (3) as in the negative pressure chamber (2), the plate springs (1) do not experience any deflection. Only a pressure difference in the chambers causes the diaphragm springs to bend and the pressure difference is displayed on the measuring mechanism by transmitting the spring stroke via a push rod (6). The two plate springs are hydraulically coupled via a filling medium (7). The resilient corrugated pipes (4) ensure that the two pressure chambers are sealed against the atmosphere. The two sealing elements (5) provide overload protection: as soon as one side of the differential pressure manometer is overloaded, they safely shut off the pressure chamber from the atmosphere.

A barometer is used to determine the air pressure . As a rule, absolute pressure measuring devices are used that measure the pressure against a vacuum . This pressure difference leads to a force that is exerted on a surface (usually a membrane) and can be determined by measuring the force. Barometers usually have a measuring range of 800 to 1200 mbar absolute pressure (pressure versus vacuum).

A pressure sensor is a measuring element that converts the physical variable pressure into an electrical output variable proportional to the pressure . The definition of the pressure is used to determine the pressure applied and traced back to a force measurement. All measurement methods that are also used for force and weight measurement are therefore suitable: piezoelectric sensors , strain gauges, but also pressure balances .

Are pointer pressure gauges mounted on machines that vibrate heavily, e.g. B. compressors or hydraulic units , instruments are often used, the housing is filled with a transparent liquid. Mostly glycerine is used here (hence the name glycerine manometer), but also silicone oil, and in the pharmaceutical and food sector also white oil . The viscosity of the liquid dampens the pointer deflection when the pressure to be measured fluctuates dynamically or the housing is exposed to strong vibrations, thus making it easier to read. The vibration-damping and lubricating properties of the liquid also increase the service life of the mechanical parts of the measuring mechanism. However, the liquid does not have to do directly with the acquisition of the measured value.