This article covers the scale for display purposes. Skale is also the Flemish name of the French commune of Escalles .

A scale (from Latin scalae , ladder, staircase), also scale , denotes a sequence of a number of graduation marks on a display surface. The division can be uniform or, if necessary, also uneven. It is used to display a value with the help of a reading marker. For values ​​of physical quantities on technical devices, the dashes are usually supplemented with numbers and units ; otherwise word entries or evaluation marks are also possible. A display means of a scale is in the measurement scale display referred to. The alternative to this is the numeric display .

The term scale is used in the metrological literature and is standardized by the German Institute for Standardization .

Setting dial of a radio receiver around 1938, backlit during operation, here in incident light

Level clock with a circular scale shows the water level of a river. Reading on pointers

A gauge with a straight scale shows the level of a dam. Reading on the water surface

Revolver dial of an older transmitter

Scales are of fundamental importance in analog technology for the quantitative indication of sizes. While a qualitative statement such as “fairly full” can be made on the size of the “filling level” of a boiler due to a pointer position, a scale in addition to the pointer is unavoidable for an indication of “92% full”. When measuring by means of an analog display measuring process, the variable to be set or measured is almost always converted into a distance or an angle; Together with a scale, this turns into a numerical value or measured value (number times unit) when read by humans.

The advantages of the dial display over the numerical display are

There is a smooth transition on a scale. For example, when measuring the body height, the display on the scale of the measuring stick can be between 1.76 m and 1.77 m. In principle, any number of further digits can follow with a stepless setting. But how far further digits can be specified depends on the accuracy of the measurement. Both in the lack of reproducibility in posture and in the limitation of the reading option given here to approx. 1 mm, the specification of places below 0.001 m cannot be justified in this context; see also measurement deviation or significant digits .

With station clocks of the usual design (with minute hand, but without second hand), the stepless readability does not fail because of the scale, but because the minute hand is only adjusted gradually.

Spread scale of a measuring device with moving iron
measuring mechanism, measuring range 0.6… 6 A,
display range 0… 12 A,
scale division 0.2 A

The amount of difference between the values ​​that belongs to two consecutive tick marks is called the scale division. It is given in the same unit as the readable measured values.

Drum indicator with many scales

Scales have a scale division that is based on readability and the required or possible accuracy. To make it easier to read, the lines can be of different lengths or widths and can be supplemented with a scale number. Often a unit is part of it. Values, which are usually set steplessly between the graduation marks, can be estimated for specifying real numbers or measured values ​​within the scope of the measurement accuracy. According to DIN EN 60051, scales of electrical measuring devices should also bear a measuring mechanism symbol, a class symbol and other data important for use. In some cases (see picture of the moving iron measuring device) the measuring range must be differentiated from the display range and marked, in the picture by points on the scale. Manufacturer's information on accuracy only applies in the measuring range.

As a reading mark z. For example, a mechanically moving pointer (e.g. with an analog multimeter ), a light beam (with a mirror galvanometer ), a bar (with a liquid thermometer ), a luminous point (with an oscilloscope ) or the vernier scale on the movable measuring arm with a caliper .

Instead of the movable mark in front of the scale, the scale can also be movable with respect to a fixed mark. It then consists z. B. from a printed tape, a disk or a movable transparent surface provided with markings, which is projected onto a screen (projection scale, e.g. on older laboratory scales and some tube radios).

Scale displays can be implemented digitally and electronically using liquid crystal displays without any mechanical movement .

On many devices (radio receivers, frequency generators, analog multimeters) there are multiple scales that z. B. apply depending on the measuring range or frequency band. They can be switched mechanically (revolver scale; only the valid scale is visible) or indicated with an indicator light. 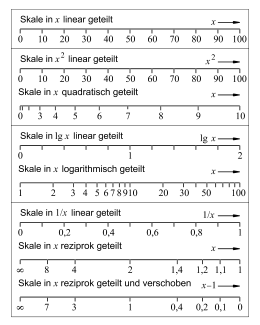 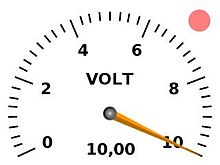 Division of the scales

Scales can be linear, quadratic, logarithmic or divided according to other laws. The latter option allows the highlighting of areas of interest with extended graduation marks or the correction of non-linearities in the associated measuring system. So z. B. with moving iron measuring mechanisms the measuring range parts of interest are spread by the construction of the measuring mechanism - the scale is then designed accordingly.

The uniform or linear scale, as it is generally known on the folding rule or liquid thermometer , is preferred because it is the easiest way to estimate intermediate values ​​between two graduation marks. Normally, the scales run circularly clockwise or in a straight line to the right or upwards with increasing values. However, opposing alignment also occurs, such as for the display of remaining runtimes or with resistance scales on analog multimeters due to the reciprocal relationship with the current strength in the measuring mechanism.

A display device whose display area extends over several revolutions enables a particularly fine resolution . The display can then supply the lower-order digits of a decimal number, for example with the values ​​00 ... 99 over a full range, and a counter for the number of revolutions supplies the higher-order digits. Such displays are used with helical potentiometers. Clocks work according to the same principle, only one or two additional hands are used instead of the counter (seconds, minutes, hours hands).

According to DIN EN 60051 , the accuracy of a measuring device is defined as the degree of agreement between the displayed and correct value. The accuracy is a purely qualitative variable, because a quantitative indication would have to be given a high value for a high level of accuracy, which is not common. The agreed or permissible error limits are suitable for quantitative information . Devices with high accuracy have small error limits. In the case of electrical scale measuring devices, these are specified by class symbols. In the case of a class 1.5 device, the error limit is, in the best case, 1.5% of the full scale value . It applies to both positive and negative measurement errors.

The deviation due to unavoidable reading inaccuracy is included in the error limits and must therefore be significantly smaller. The reduction of the reading deviation to the inevitable requires, in particular, a look perpendicular to the scale and a thin pointer. This reduction is facilitated by various measures:

Digital multimeters are occasionally supplemented with a bar graph display or an LCD pointer display in addition to the numeric display , so that the advantages of a scale display (quick recognition of trends and recording of the measured value even with a cursory glance) are retained. Instead of the estimation uncertainty when reading a scale, there is uncertainty due to the limited resolution of the graduated display.

Scale display with a band of 51 light segments