A folding rule , usually ruler , yardstick or meter stick called, is a measuring instrument for the determination of lengths up to four meters, with the usual overall length is two meters. Further designations, sometimes only used regionally, are meter (-size) , double meter , folding meter or articulated folding rule .

In addition to the meter stick , the word meter measure also describes other simple measuring devices, such as the tape measure (usually 1.5 meters) for textiles or the tape measure , also known as roll meters .

The folding rule consists of short strips of wood , plastic or metal , which are connected to one another at the ends by riveted axles , making it collapsible. When unfolded, it usually has a total length of one or two meters, sometimes three meters. Most folding rules are two meters long, consist of ten members and can be folded to a length of about 23 to 25 centimeters. A yardstick that is only one meter long can be folded to approx. 10 centimeters or 20 centimeters, depending on the number of links. Earlier folding rules were in inches divided where the common name today as ruler stirred. Usually they were painted yellow. Later there were yardsticks in inches and millimeters (front and back). In continental Europe they are now implemented in the metric system and divided into millimeters and centimeters .

Accuracy classes according to EC Directive 2004/22 / EC are specified for length encoders. The accuracy class (also referred to as the EC accuracy class) can be found together with other markings in the initial area of ​​the measuring scale.

The error limits (positive or negative in mm) are expressed by the formula a + b * L. L is the size of the length to be measured rounded up to the nearest full meter, a and b can be found in the table. If the dividing step is an area, the error limit for any distance starting at this point is increased by the value c given in the table.

Folding rules marked according to 2004/22 / EG have a CE mark in addition to the accuracy class . The CE mark is followed by a rectangle with an M and two digits. This is the so-called metrology marking. The digits are the last two digits of the year "in which the marking was affixed". Generally the year of manufacture of the folding rule.

The metrology marking is followed by the identification number of the so-called notified body . The Physikalisch-Technische Bundesanstalt maintains a list of the bodies notified in Germany . 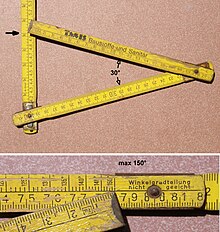 In the case of folding rules, there may occasionally be different graduations on the front and back. The joiner or carpenter sometimes uses a side with metric graduation and the back with inches , since the wood thicknesses are often given in inches . Folding rules sometimes also have additional divisions for simple angle measurement (see pictures on the right), for converting between diameter and circumference or a tile division .

Folding rules with a depth measure are very rare. Similar to a vernier caliper , it consists of an approximately 5 mm wide, 1 mm thick and a little over 15 cm long metal strip with embossed graduations and a small toggle about 2 mm in diameter at the top. It is guided in a milled groove at one end of the meter rule and can be pushed out over the end, for example to measure the depth of blind holes. However, due to the complex manufacturing process and the relative inaccuracy at the same time, these folding rules were not able to establish themselves sufficiently compared to a "real" "slide gauge" , since a depth gauge is mainly required in the metal area, where conventional folding rules are rather unusual.

A tirette is used in the ball sport of pétanque to measure when the distance between at least two game balls and the cochonnet cannot be determined with a tape measure .

The name ruler suggests that once a rigid rod - one floor - the length of a foot , a yard or a Klafters , which was divided in inches, corresponding named ruler. Even in Roman times, however, folding or folding rulers made of bronze, brass or wood were known, and they were increasingly popular. These collapsible sticks are still popularly called a folding rule. 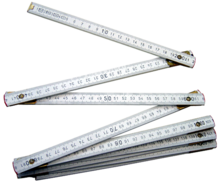 Functioning of the articulated bar measure

Already in Diderot's Encyclopédie from the second half of the 18th century there are images of riveted joint rules in their current form. At the end of the 19th century, models were produced with springs in the joint, which lock the scale in the stretched and folded state. The brothers Franz and Anton Ullrich , who came from Maikammer , had such a spring joint patented in 1886 after more than 30 years of development. Just three years later, the folding meter attracted a lot of attention at the world exhibition in Paris . Gustav Ullrich, the nephew of the inventor Anton Ullrich, founded the Stabila company in Annweiler am Trifels in 1889 , which still exists today. Around the same time, the Swede Karl-Hilmer Johansson Kollén developed a collapsible rule that, in addition to the Swedish inch measure, also had the newly introduced centimeter scale .

Other devices and tools for measuring length

A rigid tape measure ( tailor's tape ) is often used in the textile trade , where fabrics are measured from the bale. These yardsticks are usually divided into centimeters. Lumberjacks also use a rigid tape measure to cut logs one meter long. A tape measure , measuring tape or tape measure is made of a flexible material (fabric, plastic, steel) that can be rolled up. These tape measures are available for different areas of application and in different lengths. A measuring stick , which is usually three or five meters long, was used in surveying technology to measure length. Foldable, pluggable or telescopically extendable leveling staffs are used in geodesy and construction to determine height differences.

For left-handers there is a special variant of the folding rule. Held in the left hand, the numbers on an ordinary folding rule are upside down. The left-hand folding rule compensates for this by reversing the printing (see illustration).