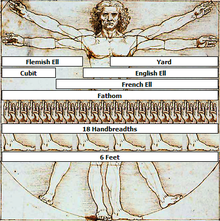 The International Bureau of Weights and Measures ( Bureau International des Poids et Mesures ) defines metrology as "the science of measurement, which includes both experimental and theoretical determinations, with any level of uncertainty and in any field of science and technology".

Metrology must not be confused with meteorology, i.e. meteorology (from Gr. Μετέωρος metéōros "floating in the air", see also meteor ).

Fields of activity and categories

The fields of activity include:

Metrology can also be divided into the following categories:

The definition and control of weights and measures within the framework of legal metrology is a national, sovereign right that is now usually exercised by state institutes. The same institutions are usually also active in scientific metrology.

In Germany, basic and advanced training for the discipline is carried out by the German Academy for Metrology .

Together with the Physikalisch-Technische Bundesanstalt (PTB), the Technical University of Braunschweig has been offering in- depth courses on metrology for doctoral students with the International Graduate School of Metrology since the 2007 summer semester .