Tape measure made of coated linen 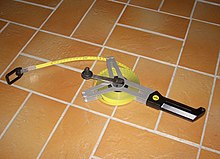 A tape measure , and tape measure , in surveying usually measuring tape or roll tape called, in Austria and Switzerland, regional and the tape measure , is used to determine short distances with mm - accuracy and greater lengths from 10 m to 100 m with cm -Accuracy. It is placed on the floor or stretched between the measuring points. In surveying , intermediate points and control or linear dimensions are also determined.

Steel tape measures are made of thin steel tape with a lacquer , plastic or fiberglass coating and are rolled up after use or for storage and transport. The common lengths of such tape measures are 3 m, 5 m, 20 m, 30 m and 50 m. There are two different versions of the measuring tape beginnings, where the zero point is directly on the retaining ring or about 10 cm away from the retaining ring.

Measuring tapes made of glass fiber reinforced plastic are mainly used for applications where heavy soiling and moisture are to be expected. Another area of ​​application is the proximity of electrical lines without insulation or when there are doubts about the insulation. Metal measuring tapes harbor the risk of short circuits or current flow to the user's body. Steel tape measures can also have a magnetic effect; plastic tapes can also be used here. Due to the design, their accuracy is lower than that of steel measuring tapes.

There are also tape measures made of coated linen, but they are less accurate. They are mostly used in tailoring where the material to be processed is partly flexible and where partly convex shapes, such as body circumference or arm lengths, have to be determined. They were introduced to the French tailoring trade around 1825–1830.

Measuring tapes have been partially replaced by laser distance measurement since around 1990 .

Measuring tapes with a hand crank or the like for rolling in, as they are used in the trade or in school sports , are called roll measuring tapes. These can be housed in a plastic, metal or leather capsule or in an open frame.

Tape measures with lengths of up to 10 m, which are housed in compact capsules and are usually rolled up with a spring mechanism, are called pocket tapes. A small metal bracket is often attached to the beginning of these pocket tape measures, which makes it easier to read off the external dimensions - it is simply hung on the workpiece. Sometimes this metal bracket can also be moved by its material thickness in order to simplify the correct reading of both internal and external dimensions.

A bearing tape is weighted down at the lower end with a tension weight and is used to measure the liquid level in a container. As a rule, measurements are taken against a bearing table attached to the container.

Accuracy classes according to EU Directive 2014/32 / EU are specified for length measuring devices . The accuracy class (also referred to as the EC accuracy class) can be found together with the EC approval number in the initial area of ​​the scale.

The error limits (positive or negative in mm) are expressed by the formula a + b * L. L is the size of the length to be measured rounded up to the nearest full meter, a and b can be found in the table. If the delimiting division step is an area, the error limit for any distance starting at this point is increased by the value c given in Table 1.

( 1 ) Applies to combinations of measuring tape and drop weight.
( 2 ) If the nominal length of the measuring tape is more than 30 m, the error limit may be increased by 0.75 mm for each 30 m tape length.

When measuring length with freely hanging steel measuring tapes and wires, the following corrections must be added to the measured dimension :

The corrections listed are not applied for short distances that have to be determined with centimeter accuracy. However, the corrections play a major role in precision measurements with wires that are mostly made of invar , the coefficient of thermal expansion is almost zero. These wires are subjected to a constant tension by weights or springs. Usually you work with freely hanging wires. In order to keep the slack small, the cross-section of the wires is small. Measuring wires have no division, but are i. A. Provided at both ends with a short metal strip made of the same material, which has a zero point and often an additional division on both sides of the zero point.