This article is about a craft occupation. For people named Zimmerer, see Zimmerer (disambiguation) .

A carpenter or carpenter is a profession in the timber construction trade . The majority are carpenters . Talented master carpenters often trained to become master builders earlier .

The patron saint of carpenters is St. Joseph of Nazareth .

Like Zimmer, the term was formed from Middle High German Zimber and Old High German Zimbar , which means “timber” and, derived from it, “building”. The original meaning “timber” ( Germanic * timbra- ) has been preserved in English timber and Swedish timmer , for example .

Carpenters are professions in the construction and woodworking sectors . Carpenters manufacture, install and repair parts of buildings such as roofs , half-timbered , balconies and porches and interior design ( wall coverings , flooring and wooden ceilings , stairs , together with the builders ), and even entire buildings made of wood ( block and prefabricated houses , outbuildings - such as carports , Barracks , warehouses, agricultural outbuildings). Timber engineering (bridges, towers, hydraulic engineering, landscaping and the like) is also part of the professional field. In addition, the activity also includes cladding in concrete construction , heat and sound insulation as well as moisture and wood protection .

The ship carpenters ( boat building , shipbuilding ) are a special form .

Today's profession is divided into the work fields of workshop (prefabrication of elements, storage of building materials) and construction site (external assembly, interior construction ). The work of the assembly preparation and installation is called in carpentry the joinery . 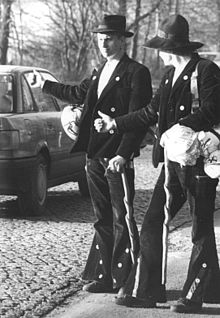 Carpenter in traditional carpenter's costume on the Walz in Erfurt (1990)

As prerequisites, a carpenter should have skills such as manual dexterity, spatial imagination and technical understanding. Carpenters work almost exclusively together, a high level of teamwork is necessary, but also a high level of personal responsibility . Carpentry is hard physical work , the work environment includes handling heavy building materials (heavy lifting, heavy carrying) and machines, and outdoor work and exposure to weather (heat, cold, moisture) as well as work at heights , and overall, like most construction professions, pollution, dust, noise and increased risk of injury , therefore robust health and physical resilience, physical strength and mobility, a head for heights and surefootedness should be available.

The carpenter's coat of arms, worn in the cleft on the belt lock .

Carpenter is a recognized training occupation according to the Vocational Training Act (BBiG) and the Crafts Code (HwO). The mono profession is trained without specialization according to subject or focus in industry and craft. The training can take place in two stages. After completion of the first stage (two years) construction finishing / in is in the second stage (one year) of professional qualification Zimmerin Zimmerer / purchased. The training usually takes place in the training company and in the vocational school . The first year is usually a year of vocational primary school and this is followed by in-company training, usually with vocational school blocks. School training is also offered. The training lasts three years. The independent exercise of the learned profession as a journeyman is prohibited by the restriction of the freedom of trade of the Chamber of Crafts . Training opportunities exist for carpenters foreman , rooms polishing , master carpenter and restorer in carpentry .

In 1909, in Bavaria and later throughout Germany, the tradition was shaped that apprentice carpenters always have a spoon with them. A venerable carpenter who has put his skills to the test is entitled to a warm soup in every tavern after the work is done. The spoon is carried in a belt loop on the front of his work trousers. It shows commitment to wearing this symbol to a job interview, for example, to show that one has dealt with the customs and traditions.

Since 2008, the master’s title has been recognized as a general university entrance qualification and thus entitles to university studies . The journeyman's certificate together with three years of professional activity entitles you to study at a university of applied sciences .

The carpentry profession is a recognized apprenticeship according to the Vocational Training Act (BAG). The training takes place in the dual training system for training companies and in the professional school and closes after a three-year apprenticeship with the final examination for carpenters or to Zimmerin from.

The average starting salary in 2008 was € 1,750–1940 gross per month. There are further training opportunities, u. a. to the foreman . A qualification examination (master craftsman examination) is required for independent commercial occupation . Related professions are formwork builders (formwork carpenter) and prefabricated house builders in the wood sector.

Vocational schools for carpentry can be found in all federal states. In the Upper Austrian town of Freistadt, the dual profession of bricklayer and carpenter can be learned. Technical schools are located in Edelhof near Zwettl (Edelhof technical school) and in Hallein (building trade school for carpenters at the HTL Hallein ). Higher technical colleges (HTLs) also offer similar training in the fields of structural engineering , structural engineering and timber construction.

In Switzerland, the job is a basic job . The training takes place in a carpentry or a timber construction company and in the vocational school , lasts four years (as of 2014), and ends with the Federal Certificate of Competence Carpenter EFZ .

The professional representation of the carpenters is the Bundesinnung Holzbau (Holzbau Austria) of the federal branch of trade and craft of the Austrian Chamber of Commerce (WKO), further important interest groups are the federal guild of carpenters and the professional association of the wood industry of Austria the WKO. The occupation of carpentry is assigned to the occupational field of construction, construction ancillary trades and wood and the occupational field of building construction and construction technology and carpentry and natural materials processing by the labor market service .

In Austria there are around 1000 or 500 carpenters (despite the unique ÖNACE identification number 4522, the figures in the performance and structure surveys by Statistics Austria and SME Research Austria differ ). Their annual gross added value is (2006) around € 300 million, which is around a third of the entire wood processing industry (wood construction, paper and pulp industry, wood-based materials industry, energetic use of biomass).

Guild coat of arms of the carpenters 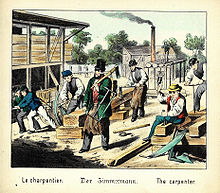 The carpenter (from What do you want to become? Around 1880)

In the early days, almost every homeowner was also a carpenter, as he mostly had to build his own house. As the professions became more and more specialized later, the carpentry profession also became independent.

Through the development of guilds and the associated quality assurance of particularly important work techniques ( roofing , foundation or gates) in the Middle Ages, the carpenter became indispensable, especially in the city.

In particular, prestige buildings such as town halls or guild houses with their elaborate roof shapes could no longer be easily built by laypeople. An experienced master carpenter was hired. He took on important work himself, such as tying up the roof on the drawing floor . Less to keep his secrets, but because precisely this work was one of the most complicated construction tasks at the time.

A heyday of the carpentry trade was the Middle Ages with its daring large urban half-timbered buildings . Examples are above all the bone carving office in Hildesheim , the Wernigerode town hall and the entire old town of Quedlinburg ( world cultural heritage ).

The French carpenters, the maître de charpentier , reached a high point in the roof construction around 1900 with their curved and merging, twisted and arched roof surfaces. Hardly anyone has mastered this art today. Examples of village room art can be seen in the Detmold open-air museum and in the Hessenpark in Neu-Anspach . The village carpenter also knew how to give the sober and functional house its own character. Even on the poorest peasant cottage, jewelry and ornaments were not forgotten.

Carpenters traditionally wear a creole in their left ear. The earring should be used to pay funeral expenses in the event of an accident. The arrangement of the mother-of-pearl buttons on the bell-bottoms shows which year of training they are in, journeymen wear 4 buttons. The broad-brimmed hat is used to catch chips falling above working colleagues, they should not slip into the collar. In addition, nails are kept ready in the hat brim. Carpenters traditionally do not nail armor , they are only tied with calf ropes. Only very high loads are forward cleats secured. In traditional carpentry, only hardwood nails are used, but metal nails have established themselves in modern constructions. The carpenter's most important tool is the roofing hammer . This was previously made by blacksmiths especially for each craftsman. The handle itself is usually made of ash wood .

After entire rows of houses burned down in many villages, strict regulations were issued in the 18th century under Count Palatine Karl IV to prevent a fire, which also regulated the removal of chips every evening in the carpenters' workshops.

In today's building trade, carpenters are one of the few professional groups who still place great value on their traditions in the region, in particular on the years of wandering ("Walz"), especially the shafts maintain this old custom. Divide the traveling journeymen carpenters are the Manchester jacket and vest, floppy hat, Stenz and bundles. Today it is estimated that only a few hundred per year are traveling in Europe and overseas.