The roof structure of the Königsberg Cathedral

According to their structure, a distinction can be made between

If the main load-bearing elements appear static in three dimensions rather than in one plane, one speaks of a spatial roof structure . These include, for example, spatial frameworks or vaults .

Roof structures that are designed as supporting scaffolding are also referred to as roof trusses or roof structures, especially with traditional roof shapes . Roof scaffolding is another alternative name for the entirety of the structure supporting the roof membrane.

The term roof truss is also used when a chair construction , which is typical for traditional rafter and purlin roof constructions, is not part of the structural framework. There a chair refers to a support structure below the rafters , which is formed from chair columns, frames , struts , ties and, if necessary, sleepers and serves to stiffen and transfer the load of the roof structure.

The building material wood continues to play an important role in roof constructions in residential building, especially for the two classic variants, the rafter roof and the purlin roof. Steel and reinforced concrete constructions as well as wood composite constructions (e.g. glue and nail ties) are found particularly in large halls.

The essential components of a wooden roof structure are:

The purlin roof is another roof construction for making a gable roof. Its name-giving main feature are the horizontal purlins on which the sloping rafters rest.

The truss or hanging structure is used to support the roof structure when the load is only transferred to the outer walls. They are used when the roof space offers enough space. The distance between the individual containers can be approx. 3.5 m to 5.5 m and the intermediate distances can e.g. B. be interrupted by openings.

Roof structures with little or no inclination, such as flat or flat monopitch roofs, are statically the same, apart from their incline, similar ceiling structures. The beam position or the reinforced concrete slab of the last floor can also be the roof structure in this case.

Sketch of a roof structure made of trusses (triangular truss) 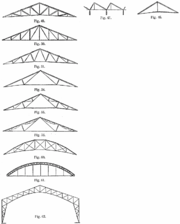 Roof structures of halls must, on the one hand, span larger spans than in house construction and, on the other hand, make a significant contribution to the stability of the overall structure due to the large-scale spatial structure of hall structures. The wide-span roof structures, for example, the construction of riding arenas , gymnasiums , warehouses and industrial buildings used.

The timber engineering is also made by the carpenter . The beams are made of solid wood (structural wood ) or glued laminated wood .

All three static systems are set up with a girder spacing of 4 m to 10 m.

Beams with spreaders ("air supports") are suitable for evenly distributed loads, for example a glass structure. The top chord is subjected to bending stress, it is raised to stabilize it.

Roof structures made of wood