The title of this article is ambiguous. Further meanings are listed under strut (disambiguation) . 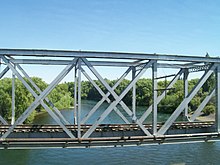 Struts in a metal framework 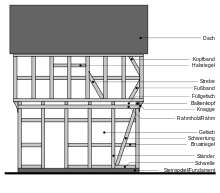 A strut is a component that often runs diagonally and is primarily used to dissipate tensile and compressive forces . For example, horizontally protruding components such as balconies are supported on a vertical wall by means of struts. In structural engineering , struts are considered rods .

With the framework , struts belong to the crossing and serve to stiffen the overall construction. A strut directed from below towards the stand is called a foot strut , a strut that extends upwards from the stand is called a head strut . A series of struts at an angle of about 45 ° is also called an ankle strap and head strap . In traditional timber frame construction , a storey-high strut is also known as a sword .

As a rule, struts are pegged into the truss threshold and the frame . Tenons adapted to the thickness are worked on at both ends. The position is often secured with a wooden nail at both ends. The strut can also cross in pairs in a compartment and thus form the shape of a St. Andrew's cross . The selected material thickness often corresponds to that of the other beams. At least one strut must be provided in each wall to stiffen the structure.