Stonemason working on a stone with so-called dishes (Dresden 1948) 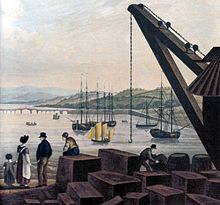 Ashlar blocks in a port warehouse on a historical display

Church wall made of natural stone in Mohelnice nad Jizerou

A stone is a stone that is viewed as a workpiece , i.e. as an object of manufacturing technology . In this way, the ashlar stands in contrast to the unprocessed reading stone or quarry stone or the rough block, which as such is not yet used as a building material or everyday object. The stone is also the central artistic medium of the (stone) sculptor .

Stone in the trade

Solid stone is used by stone masons . Natural stones less than 8 cm thick are referred to in natural stone DIN 18332 as panels and more than 8 cm as solid work. Producing massive work is what the stonemasons call handicraft, so they produce a work, stone. The stone processing and the corresponding use of tools by the stonemasons differs considerably according to soft stone or hard stone .

In addition to cement as a binding agent and, if necessary, various auxiliaries, additives and fillers, gravel , i.e. natural rock , is mainly used as an aggregate for production.

The stone surface is processed in order to obtain the following structures, for example: Gap-rough, flamed, bush hammered, embossed, sawn, ground or polished. Today, flamed surfaces are often also brushed in order to obtain a surface that is more pleasant and easier to care for.

The larger stones of the temples of Göbekli Tepe are among the oldest known stones in world architecture. The outer walls, however, are made of rubble stones .

Until the beginning of sedentarism (around 10,000 BC) there were no stone buildings at all; It was not until the representative religious buildings of the early period in the area of ​​the Fertile Crescent (e.g. Göbekli Tepe ) that the larger of the stones used were hewn and smoothed. In the temple architecture of Egypt, Greece and Rome, this technique was continuously refined and experienced new highlights in the temple architecture of India and Southeast Asia as well as in the cathedral architecture of the European late Romanesque , Gothic and Renaissance , although here too often only the visible sides of the walls with precisely carved stones were clad, while the filling material consisted of rubble and rubble.

On the cultural level of the hunter-gatherer people lived under ledges ( abris ) or in small huts made of branches and twigs with covers made of leaves, reeds and grass. Much later, solid structures were built from branches with clay plaster or half-timbered structures . A stone construction method developed only very gradually in residential architecture, in which the found stones used for building were simply placed on top of one another and sealed and stabilized with a little earth; Depending on the region and the building purpose, this technique has persisted up to the present day (see e.g. the Agadire in Morocco). All in all, it took significantly longer for palace and residential buildings to establish an architecture made of precisely shaped stones ( clay bricks or masonry bricks ).

In defense and fortress structures (castles, city walls, etc.), but also in village churches, the quarry stone construction still lasted into the late Middle Ages, sometimes even well into modern times, although the corner stones of gate buildings or mountain tidings were mostly carved exactly. The walls, which are often very thick, were often covered with stone.