A mud brick ( adobe ) is an air-dried cube made of clay that is formed with the hands or with a boarding and is used in clay construction . Sand is mixed with fatty loam and sometimes fibrous materials such as straw or animal droppings from herbivores such as camels, cattle and horses are added. Vegetable fibers reduce weight, improve thermal insulation and give tensile strength, so that cracking during drying is reduced. When it rains heavily, the mud brick softens again, mud walls must be protected from permanent moisture and driving rain. By burning a mud brick into a brick , clay brick or clinker brick .

History of the adobe bricks

The use of air-dried mud bricks has been an important human cultural technique since the Neolithic . The methods of earth building were further developed depending on the available material mix for the bricks and fuel for the kilns. The adobe architecture was probably invented independently of one another in several regions of the world ( Middle East , Central America , China ).

In earth building next to the clay brick and walls are rammed , Weller , Lehmbroten and clay truss made.

In English-speaking countries, construction methods with unfired bricks are often referred to with the Spanish term adobe , which is derived from the Arabic word for coptic “tôbe” = brick. The term spread through Spanish descriptions of pre-Columbian buildings in Central and South America. The Pyramid of the Sun in Teotihuacán , the Huaca del Sol and the Huaca Larga in Peru are considered to be the world's largest adobe structures. 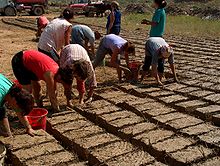 Production of adobe bricks in Romania

To produce the air bricks ( green compacts ) clay is used, usually with sand, vegetable fibers or other fillers made leaner is. Too much sand reduces the load-bearing capacity of the bricks, too much clay makes them crack. The addition of dry or soaked straw (as is common in Egypt) must also be carefully measured. The carefully kneaded, viscous clay mixture is traditionally pressed into rectangular wooden, today often also into metal molds. As soon as the mass has solidified, the frame of the form is removed. Bricks with a high clay content are usually stored in the shade for drying , as too rapid water evaporation can cause cracks. In parts of Latin America and Mesopotamia , however, the blanks are also exposed to direct sunlight to dry.

Mud bricks are sensitive to running water and strong moisture penetration (not to increased humidity). Thanks to their good heat storage, they offer advantages over many other building materials in dry, hot regions such as Egypt , Iran , Yemen or Bolivia, despite their mediocre thermal insulation . The bricks heat up during the day and slowly release the stored heat to the environment at night. This means that a building made of adobe bricks stays cool during the day and warm at night. In areas with strong solar radiation, buildings are provided with a thicker wall on the sunny side in order to be able to store as much energy as possible. In northern latitudes, glass or translucent (translucent) insulation materials are placed in front of the wall to increase the heat storage of the wall in order to keep the heat in the component (the short-wave light radiation is allowed through, but the long-wave heat radiation to the outside is slowed down).

Mud bricks can be completely recycled. Mortar and plaster residues made of clay can usually be easily removed. Whole and half stones can then be used again for masonry. Broken stones can be soaked with water and processed into mortar, plaster or new clay blocks.

The adobe defined until 1973 the preliminary standard DIN 18951 as a generic term for Lehmquader, Lehmbatzen and green models . Clay blocks are made from earth-moist, lean (low-silicate) clay. The DIN provides for forms with the dimensions 365 × 230 × 110 mm into which the clay is tamped and then air-dried. Due to the heavy weight of around 20 kilograms, these earth blocks are difficult to brick up. Clay lumps are made from a damp, medium-fat clay mixture to which fibrous aggregates are added. The clay lumps are then thrown into the wooden mold.

Green compacts are madeindustriallyfrom fat, i.e. clay with ahigh content of clay (also known as blue clay). Unfired bricks in brickworksare also referred to as green compacts, which, like mud bricks , are mainly made of clay and sand .