This article covers the excretions of the intestines or cesspool. For further meanings, see Kot (disambiguation) .

Feces - in humans stool , as a plural word in medical terminology also faeces or faeces [ ˈfɛːtseːs ]; Latin faeces (plural of Latin faex = sediment, yeast), probably borrowed in the 19th century from the French adjective fécal as fecal matter in German - is the excretion ( excrement ) of the intestine or cesspool . Soiling of underwear due to accidental stool leakage (for example in the case of flatulence or child encopresis ) is known as stool smear .

The feces are composed of water, intestinal bacteria, flaked cells of the intestinal mucosa, secretions from the digestive glands, non-absorbed food components as well as fermentation and putrefactive products. When excreted via the cloaca, the products of excretion are also added.

The word Kot comes from the Old High German quāt from 10/11. Century, Middle High German quāt , kāt and gained in the Middle German sound quōt , kōt (11th / 12th century), early New High German Kot through Martin Luther literary language validity. All forms - also in the Slavic languages ​​- go to ie. * gu̯ēdh- back. The meaning of "street dirt" has been preserved in the word fender since the 19th century. Even today, the Duden describes excrement as out of date for "softened earth, muddy dirt on a path or a road". This original meaning is still used in Austria . While the term fender is still in use today, a manure brush (for the - coarse - shoe brush ) is hardly used anymore.

Especially with herbivores , especially ungulates , the name dung , in the hunter's language, slogan , is common. By contrast, manure is a mixture of litter and manure in the stabling of herbivores. Similar to the word dung , the word dung originally had a different meaning; It initially referred to the covering of storage and lounge rooms half dug into the ground. As insulation against winter cold, these were given a layer of dung (see Donk and the English-language dungeon ). Manure also describes predominantly natural soil additives - similar to manure - to increase yield; hence also fertilizer .

A term for the bowel movement ( defecation ) in humans is the bowel movement . This name comes from the time when the so-called body chair (toilet chair ) was used, a chair with an opening in the seat and a pot or bucket hanging below it. Since the 16th century, stool (from Middle High German stuol-ganc , originated from zuo stuol gân , to go to chair) has been an expression for human feces. The idioms “come to a chair” or “come to a pot” also have this origin, namely bringing a lengthy, arduous process to a successful conclusion. In particular, because in sick people the resumed intestinal activity is mostly seen as a sign of improvement in the course of the disease.

The Greek name for excrement, manure and dirt is κόπρος kópros . This is contained in terms such as:

The scientific study of the feces is called coprology or scatology .

Shit and shit are commonly rough terms for feces, throughout the German-speaking world as Schimpf- and curse widely used and generally considered interjection , in adverbial or adjectival use regulations. This is where the term fecal language comes from. In the same context, the corresponding Anglicism shit is usedmore and more frequently.

Feces consist of non- absorbed parts of the food, of the body's own substances and of microorganisms living in the intestine , the intestinal flora . The former are mainly the indigestible fiber , but also undigested residues such as fats , starch , connective tissue and muscle fibers as well as the amount of water that was not absorbed in the upper sections of the colon.

The body's own substances contain rejected intestinal cells, digestive enzyme residues and mucus. The bile pigments bilirubin and biliverdin be in the colon by bacteria stercobilin degraded bilifuscin and Mesobilifuscin and give the characteristic yellowish brown to dark brown color. Small amounts of the bile acids themselves, as well as the lecithin and other phospholipids secreted by the gallbladder to protect the intestinal mucosa, are excreted with the feces.

The unpleasant smell of omnivorous feces comes from indole and skatole as well as alkanethiols . These arise during the digestion of proteins . Also, hydrogen sulphide contributes to the odor; it is formed when the sulfur-containing amino acids are broken down by putrefactive bacteria.

The intestinal flora, some of which are dead, makes up around 20 to 30% of the total mass of the faeces in humans. It consists predominantly of bacteria ; in addition, yeasts ( Candida ) and other unicellular eukaryotes are present in small quantities .

Feces are used as a natural fertilizer . In agriculture, this applies in particular to manure (manure from stables with a binding medium, often straw, sawdust, hemp chaff and hay) and manure (liquid consisting of manure and urine). Guano (bird droppings) was a popular fertilizer in the 19th century that was collected and shipped in large quantities on bird-rich islands.

In earth building , not only lime but also manure is added to the earth in order to improve the material properties of the earth .

In the past, faeces were collected in so-called gold buckets for a fee and processed centrally in factories using sulfuric acid to make fertilizer .

Dried manure from certain animal species can be used as fuel after drying . In India , for example, cow dung is mainly used , in desert areas especially camel dung and in other areas even elephant dung is used as a substitute for wood.

Feces in nature and ecosystems

Feces have an important function in ecosystems due to the minerals and undigested components they contain . It is used as food for mold and mites . During the decomposition by the fungi, nitrate is released from organic nitrogen or ammonium compounds , which plants, along with the other minerals, serve as fertilizer. Plants such as rowan berries use bird droppings as a suitable means of spreading their seeds because of this fertilizing effect. Many other seeds also contain a protective layer that allows them to survive digestion unscathed.

Some owls spray their enemies with their liquid droppings as they flee. Many animals such as dogs , cats or the ocelot use the smell of the droppings to mark their territory.

Rodents and rabbits are herbivores that do not have the ability to ruminate . They excrete the food in the form of soft fecal pills, the appendix , and then swallow it again directly in order to be able to absorb the nutrients released in the colon. This is a form of coprophagia . Horses are not ruminants either: they excrete a large amount of horse droppings every 30 to 120 minutes, depending on how they are fed. The total amount can be up to 50 kg per day. Commonly known as the pill-turner , the beetle uses feces both as food and for reproduction.

The examination of the feces for hidden or occult blood (mainly as a guaiac-based test ) is an important early detection measure in colorectal cancer screening.

The following pathogens, among others, can also be detected in a stool examination or transmitted through feces ( smear infection ):

It has recently become possible to detect inflammation of the intestinal mucosa by detecting calprotectin (a calcium-binding protein) in the faeces. This laboratory test is used, among other things, to identify and monitor the progression of ulcerative colitis and Crohn's disease .

In the stool, the body can absorb ( incorporated ) toxic or radioactive substances such as B. lead , cadmium , polonium or uranium can be detected.

Among the parasites , many tapeworms are dependent on the excretion of tapeworm limbs for reproduction via a host change .

When slaughtering farm animals, faeces and meat must be strictly separated because of the numerous diseases that can be transmitted through faeces.

The Pica , also Picazismus , is a rare form of eating disorder . People consume inedible things that are considered disgusting, including feces.

Diarrhea, blood, and mucus in the stool are often signs of serious illness. A list of such diseases can be found in the article Diarrhea .

Feces are a rock-hard structure made up of feces, mucus and phosphates, usually in the appendix . 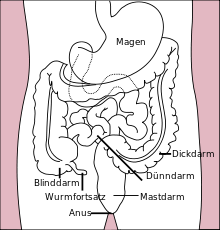 Overview of the human gastrointestinal tract

Transport of the feces

The feces are not moved continuously in order to evacuate the stool ( defecation ). Parts of the colon can adapt to the amount of stool that is present, which is known as accommodation . By means of a so-called retrograde peristalsis of the transverse colon (the longitudinal leg of the large intestine), which has a so-called pacemaker function, stool in the ascending colon (ascending colon) and appendix (caecum) can be retained and stored.

Normally, it is only two to three times per day to a analwärts directed peristalsis, in terms of a so-called mass movement a filling of the rectum causes and the chair reflex triggers. If this is deliberately suppressed, the rectum can also accommodate and serve as stool storage.

Feces in art and literature

The following important information is missing from this article or section:
further (important) archaeological finds are missing
Help Wikipedia by researching and pasting it .

According to researchers, 14,300 year old man feces were found in one of the paisley caves in the state of Oregon in the United States in 2002/2003 . The find is considered the oldest known human trace in America and led to the realization that people lived there 1000 years earlier than was previously assumed.