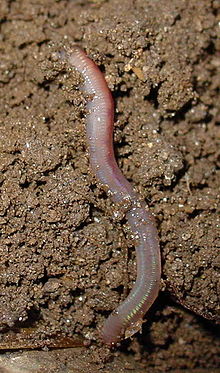 Saprobionten ( ancient Greek σαπρός Sapros , lazy ',' rotten ') are heterotrophic organisms, decomposing organic matter living in dead, so for example, the litter layer of forests, sludge , manure or sludge . This also includes the predators and parasites living in this substrate .

The subset of organisms that feed on dead material are called saprophages . The associated way of life is sometimes referred to as saprobionic. Few authors use the term saprobionts differently as a generic term for saprophytes and saprophages.

In the field of saprobionts there are a large number of terms with partly similar and overlapping meanings:

Functionally, saprophages can be divided into two groups:

Saprophages are part of communities of organisms ( biocenoses ) that ensure humus formation on land (terrestrial ecosystems) and are responsible for the formation of digested sludge layers ( sapropele ) in bodies of water (aquatic ecosystems) .

Of the organisms living in the soil ( Edaphon ), the saprophagous animal species usually make up a very considerable proportion. In addition to the nutrition of fallen leaves, dead wood, litter and humus, which go back to dead parts of plants, a crucial part of their nutritional basis is the biomass of the mineralizing bacteria and fungi that live in them. So to a large extent they are actually fungus eater (mycetophagus) and bacteria eater (sometimes referred to as microphytophagus), but do not take them up specifically, but rather as part of the decomposed plant biomass, so that these groups are usually treated together. In Central European forest soils, the most important saprophagous soil dwellers are the shell amoeba (Thecamoeba or Testacea), the roundworms (Nematoda), the enchytrae (Enchytraeidae), the earthworms (Lumbricidae), many mites (Acari), especially horn mites , the springtails (Collembola) and the Larvae of two-winged (Diptera) and beetles (Coleoptera).

Destructors in the material cycle

Saprobionte microorganisms live as symbionts in the digestive tract of mammals (cattle, humans) and insects (termites). There they break down organic substances that cannot be broken down by the host animal's digestive enzymes .

Vascular plants that have little or no chlorophyll have no haustorium - parasites are referred to previously as "saprophytes". However, it has never been proven that vascular plants can feed themselves directly on dead organic matter ( detritus ) , for example through enzymatic digestion . At most, a parasitic symbiosis with saprotrophic fungi is conceivable . But even this possibility is only actually proven in very few cases. Instead, most of the myco-heterotrophic plants live in a parasitic symbiosis with ectomycorrhizal fungi and obtain organic carbon compounds indirectly from their symbiotic partners, the forest trees. This diet is fundamentally different from saprotrophy, it is called epiparasitism . Examples are the two species of spruce asparagus as well as the orchids coral root , bird root root and violet dingel .